In Australia, there is the Aboriginal rights struggle 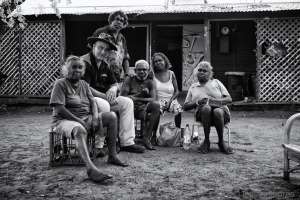 On January 26, 1972, four young Aboriginal men pitched a beach umbrella on the front lawns of Australia’s Federal Parliament in Canberra, and then sat under the umbrella. They declared it Aboriginal Tent Embassy. This inspired a peaceful resistance movement, with at first hundreds and then thousands converging to Canberra to join them on the parliamentary lawns – setting up tents and camping. Their stances shone the lens of the media – domestic and international – onto the horrific social inequalities and disparities between the First Peoples of this continent and the rest of the population. Their stance contributed to the demise of the then incumbent Government. Some positive changes occurred but 43 years later for far too many of the descendants of the First Peoples little has changed while for many circumstances have worsened – to third world-akin conditions.

In this last year, a Freedom Movement – an Aboriginal Spring – has arisen where now there is the urgent call for more of the changes still outstanding to be addressed for the descendants of the First Peoples. On January 27, the Freedom Movement marched to Federal Parliament, defiantly walking past the police who tried to stop them. The Freedom Movement protesters gave notice that they would commence a historic Sit-In at the main entrance of Federal Parliament on February 9, the day parliament reopens. The nation’s media will have no choice but to ask, “What is wrong in our nation?”

The media will have no choice but to listen to what the Freedom Movement Elders, leaders and advocates from all over this continent have to say rather than forever depend on the wash of their own superfluous armchair journalism and on the assimilationist views of the Government.

Of all the developed nations, Australia has the widest divide of social inequalities between the descendants of its First Peoples and that of the rest of the population. How is this possible in Australia? Australia is the world’s 12th largest economy and 2nd wealthiest nation per capita. Yet of the nearly 700,000 descendants of the First Peoples of this continent, hundreds of thousands languish in extreme poverty, with hundreds of their communities across the continent no more than equivalent to shanty-towns – third-world akin. From a racialized lens they are arrested and jailed at among the world’s highest rates, they are dying of suicide, unnatural and premature deaths at among the world’s highest rates.

The February 9 commencement of the Sit-In proposed by this spirited Aboriginal Spring-like Freedom Movement is hoped as a potential watershed, a turning point in their tortuous journey to the elimination of racism, inequities and disparities, in their journey for the right to be nourished by historical and contemporary cultural worth and in their rightful dividends from the social wealth of the world’s 12th largest economy.

The Freedom Movement have set themselves a date with destiny after marching on Parliament House in Canberra last Tuesday declaring they would be back in even larger numbers on February 9 to confront the country’s politicians about the maltreatment and assimilation policies which are damagingly affecting the First Peoples. Not only do nearly half of all the descendants of the First Peoples languish in poverty but they also now feel there are waves of new attacks on their cultural rights, including a wave of land grabs and dispossession of more homelands.

The last remaining founder of the 1972 Aboriginal Tent Embassy, Michael Anderson, leader of the Euahlayi People, announced at the forecourt of Federal Parliament, “We will be back February 9 and we will stay. We are here now to deliver this message. Parliamentarians return on that day and they will have no choice but to respond to us. This is our land, we never ceded our land and we will never cede our land.”

An elder of the Ngarrindjeri people, Christina Abdulla said, “We will come and we will stay. We will fight because this Government here is a racist government. All their decisions are made on the basis of racist ideologies. Our kids are being taken, our land coveted, our people harmed. We will fight the White fellas who are here in this building making decisions about us without us.”

An elder of the Wiradjuri people and lifelong social justice campaigner, Jenny Munro said, “We own this land and you stole this land. There is no Black signature anywhere that we ceded this land.”

From the western most region of the continent, an advocate of the Noongar people, Marianne Mackay journeyed six days to reach Canberra. “The Government wants to push our people off our homelands to make it easier for the miners and big business. Our homelands will be dispossessed unless we stand up.”

One of the last of the Swan Valley River People, Herbert Bropho said, “They closed down my community. They will close down more communities. They don’t care about us. It is bad in Western Australia, it is worse than elsewhere.”

One of the senior most elders of the Noongar Peoples, Ben Taylor said, “I have lived racism for more than sixty years. I was taken from my family. I was institutionalized. I was put in a room with 21 other children with one toilet bucket. When we were older we were institutionalized again, this time with jail and for doing nothing like being in possession of a bottle of wine, or for being a Black person in White area part of town. We could not get married to a White person without the Government’s permission. We could not even marry one of our own without the Government’s permission.

“We fought the battle against racism and we have marched many times but here we are again still fighting the racism. We must keep on the fighting.”

Mr Anderson said, “What we did today here will now ensure the whole country knows of us and this will ensure we mobilise numbers they do not expect for February 9.”

The dramatic march on Parliament House was the climax of days of protest in Canberra and at other capital cities around the continent by First peoples and their supporters angered at government policies they believe are designed to destroy their cultures and heritage.

The Freedom Movement was ignited by the senior most elder of the Narrunga People, Tauto Sansbury, who called for all the First Peoples cultures to build a unified Aboriginal rights struggle. It was only two months ago the Freedom Movement was ignited in the heart of the continent – in Alice Springs – after Mr Sansbury’s call out to many First Peoples cultural clans. Many of these clans journeyed to Alice Springs and met on a former mission reserve where for some of them many of their ancestors suffered. In Alice Springs they heeded the call for unity.

“We gathered at Aboriginal Tent Embassy, a gathering of many of our First People nations, we gathered in huge numbers. People travelled in convoys for days – and our poorest found ways to get to Canberra.”

Social justice warrior, Ms Munro said, “There is a sickness among White People and that sickness is racism.”

“Wherever White People have gone in this world they have taken their sickness with them. Through this sickness they harm and exploit people, taking from us what they should not.”

Professor Gracelyn Smallwood of the Biri People said, “We have to unite to end the racism, to end the wrongs, to give rise to our voice.”

“There has to be an end to the institutionalization of our people, to the trauma, to the genocide. We cannot accept the theft of our lands. There is a conspiracy of silence, and this silence must end.”

Wiradjuri Elder, Les Coe said, “We want our freedom and we are not going to stop until we realise this.”

“It seems to be quite an elusive thing but it is something we need to grab hold of.”

“As Aboriginal peoples we are just fed up. We are sick of the lies – no more lies, no more handouts, no more empty promises.”

–          From 2001 to 2010, one in 24 of all deaths of First Peoples was by suicide. However this is according to coronial data. There is an underreporting of suicides and in my own research I estimate the suicide death rate at 1 in 12 to 1 in 16 of all deaths per annum. The life expectancy of a descendant of First Peoples in real terms is 20 years less than the rest of the population. In some regions it is up to 30 and 40 years less.

–          The descendants of the First Peoples who are aged 10 to 17 years are 24 times more likely to be jailed in juvenile detention than non-Aboriginal youth.

Gerry Georgatos is a researcher, and with the lived experience, in Aboriginal and/or Torres Strait affairs and issues in Australia. He is a researcher in racism and of the ways forward, in suicide prevention and in racial and cultural identities. He is also a former correspondent with the National Indigenous Radio Service, the National Indigenous Times and contributes to the independent online site, The Stringer.