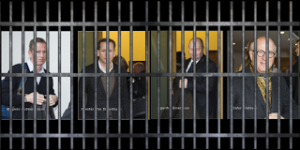 Iceland has shown how to deal with fraudulent banks and bankers who engage in market manipulation, plundering of people’s savings and unlawful activity.

It has prosecuted them as corporate criminals. Twenty six (26) bankers have been sentenced to a combined 74 years in prison for crimes relating to financial fraud and criminality.

It is a lesson other countries, including Australian could learn.

One lesson is that prosecution of corporate fraud and criminality makes good economic sense.

When the global economic crisis hit in 2008, the people of Iceland suffered  more than any other country, largely due to the actions of the country’s banks. The savings of 50,000 people were wiped out, plunging Icelanders into debt and placing 25 percent of its homeowners in mortgage default.

Rather than bail the banks out, Iceland decided to prosecute bankers who were held criminally responsible for Iceland’s financial collapse. The Iceland government appointed a special prosecutor to investigate the bankers:

In two separate Icelandic Supreme Court and Reykjavik District Court rulings, five top bankers from Landsbankinn and Kaupping — the two largest banks in the country — were found guilty of market manipulation, embezzlement, and breach of fiduciary duties. Most of those convicted have been sentenced to prison for two to five years. The maximum penalty for financial crimes in Iceland is six years, although their Supreme Court is currently hearing arguments to consider expanding sentences beyond the six year maximum.

Iceland’s approach to the global financial crises was very different to other countries. Rather than bail out, or fine the banks and impose devastating austerity measures, Iceland let its banks go bust and focused on strengthening its social welfare policies.

Bankers who committed financial crimes were indicted and imprisoned.  The Iceland Government paid off loans for consumers, forgave homeowner debt (up to 110% of the property value).

Iceland also introduced capital controls restricting what people could do with their money.

The government imposed a 39% tax on those who send their money offshore.

As a result Iceland was able to bounce back.  The Iceland economy has “recovered” and is growing faster than US and European economies. In 2015 the IMF declared that Iceland achieved economic recovery faster than other countries, without compromising its welfare model of universal healthcare and education.

When Iceland’s President, Olafur Ragnar Grimmson was asked how the country managed to recover from the global financial disaster, he replied,

“We were wise enough not to follow the traditional prevailing orthodoxies of the Western financial world in the last 30 years. We introduced currency controls, we let the banks fail, we provided support for the poor, and we didn’t introduce austerity measures like you’re seeing in Europe………..Why are the banks considered to be the holy churches of the modern economy? Why are private banks not like airlines and telecommunication companies and allowed to go bankrupt if they have been run in an irresponsible way? The theory that you have to bail out banks is a theory that you allow bankers enjoy for their own profit, their success, and then let ordinary people bear their failure through taxes and austerity. People in enlightened democracies are not going to accept that in the long run.”