There is an under-reporting of poverty and homelessness. The horrendous lie of our generation is the one that poverty is being reduced right around the world. In fact it is increasing but there are diabolical efforts to mask this. Poverty – relative and abject – is increasing in Australia and within a couple of decades more than half the Australian population will be poverty affected. Nine in ten of the world population will be poverty affected.

Homelessness is also underreported globally, including here in Australia.

Abominable propaganda demands that we should believe that the majority of the world’s poor are being lifted from poverty and that in generations to come there will be less absolute poverty. More than half the world’s humanity lives on less than $2.50 per day. One billion people cannot read or write.

We are sold definitions of extreme poverty that are regularly redefined so as to portray trends that poverty is declining. The World Bank sets the international poverty line. In 2015 the poverty line was set at someone living on or less than $1.90 per day. As if to argue that someone living on $3 or $5 dollars a day does not live in extreme poverty.

We are often encouraged away from monetary poverty line measures and we are propagandised to accept calorific measures in determining extreme poverty levels. Billions live in poverty, tens of millions flee as refugees, however the majority of the rest live depleted lives, corralled in human misery, drudgery, suffering. Yet there are those in society, including among academics and the chattering classes, who suggest that their economic poverty is not a sufficient measure. That’s because we want to sell a narrative that this world is not as grim as it really is.

Nine out of ten people are affected by either absolute or relative poverty, and though median wages are on the increase, the gap between the majority (9/10ths) and the sliver at the top of humankind is outrageously widening.

If poverty was genuinely decreasing then the world’s suicide rates would be decreasing. The global suicide toll is increasing. On average more people suicide than the combined death toll from wars, civil strife, homicides and vehicular fatalities. On average, officially one million people suicide each year. There is a significant intersection between the poverty narrative and the suicide toll.

Historically, and contemporaneously, the majority of humanity has lived humbly while a sliver of humanity, the elite, enjoyed living conditions sponsored by an increasingly aggressive excessive accumulation of resources. But more people walk this earth today than ever before and extreme poverty, absolute and relative poverty is majorly visible; it is an increasingly unavoidable experience even in the most affluent nations.

Industrialisation and the technological advances have been argued as increasing the share of people in wealth, in improving public health, in improving life expectancy. But then why do seven in ten people on this earth live poor, living on or less than $10 a day? Why does more than half the world live on less than $2.50 per day? Why are one billion people unable to read or write?

The decrease in poverty rates is because of a tampering of figures, calculations and premises.

Equality is paper-thin, an unachievable aim and only exists in human rights and social justice dictionaries, vocabularies. In the deviations from addressing poverty uncompromisingly we sell minimum rights for human rights, we sell calorific requirements for baseline living, for less than what are in effect half-lives and we sell portrayals of satisfaction levels among the poorest as happiness. There has never been a war on poverty, rather only a mass deceit. We spend more on the industries set up to respond to disadvantage than we actually spend on ending disadvantage.

Despite the majority of humanity living in poverty, relatively the world’s media reports very little on poverty, reports predominately ridiculous positive stories from within the cesspools of despair, deprivation and drudgery. There is a disinterest in telling the truth about the extensiveness of the world’s poverty.

There is a responsibility to report daily the grim realities so that we leave no-one behind. When we fail to do so then we discriminate, we do leave behind to rot. It is censorship by omission. Only by telling the grim reality can we hope to galvanise a dividend of positive change agency.

The World Bank argues that in 1980 nearly 50 per cent of the world’s people lived in absolute poverty and that in 2010 the absolute poor declined to 15 per cent, and by 2015 to 11 per cent. Horrendous lies, it must be stated. Sixty cents of variance a day is being used to bullshit us and to betray billions of people, to comfort the greedy, their sycophants, the academics, the chattering classes, the bureaucrats, policy makers and governments.

It is said that no lie lives forever but they do, unless enough rise to challenge the deceit and the politics that sold the lies. Most lies outlive the generation of the day, several generations in the least.

Challenge the deceitful and never again accept that extreme poverty is someone living on less than a $1 per day. Living on $2 or $3 a day should never be sold as living well above extreme poverty levels.

I argue that more than two billion children live in poverty and despite UNICEF arguing that 22,000 children tragically die each day due to poverty I estimate that it’s 50,000 deaths daily.

Australia is not spared. The increasing poverty is harrowing in its visibility, the homeless in the commercial precincts of capital cities and large towns but nevertheless there is a hostile denial to acknowledging the extensiveness of poverty, absolute and relative, in the Australian context.

The majority of Australians are unemployed or underemployed but we are told that the jobless are only 5 or 6 per cent. Scoundrels produce data from inauthentic starting points and all of a sudden not all the unemployed are counted. If you work one hour per week you are defined as employed. If you are not registered with Centrelink as looking for work and completing the number of job searches required then you are not counted as unemployed.

If Australia were to authentically redefine its socioeconomic staring points then we would be told that at least six million Australians live in poverty. There are two million Australian children living in poverty rather than the 740,000 children we are officially told, or allowed to believe.

The Australian Bureau of Statistics underestimates Australia’s homelessness –instead of 110,000 it’s closer to 300,000 homeless Australians. The average age of Australians is 38 years and in the twilight years of today’s 30-something-year-olds, they will know this nation with a million homeless, a nation racked with poverty, and of a world where no government will be able to hide the extensiveness of poverty and its sufferings. They may remember that they were lied to, that the empty streets of our senses tomorrow, the chaos and horrors, were of makings borne, perpetuated today.

According to the Australian Bureau of Statistics (ABS), there are more than 116,000 homeless Australians. At least, that’s how many they’ve identified.

However, the number is closer to 300,000 homeless Australians, with more than 100,000 being children. Since the data released from the ABS in 2011, we’ve identified that nearly one in five of Australia’s official homeless are children aged 12 years and less.

Most Australians would not realise that there are currently thousands of children aged 12 years and less on our streets exposed to various violence and sexual predation.

Our governments, various institutions, funded organisations and bean counting statisticians need to scrub up and start telling the truth about the extensiveness of poverty – particularly of extreme poverty – and homelessness. I will not go down the path of why poverty and homelessness are under-reported but suffice to suggest that it is playing with people’s lives.

Australia is a relatively affluent nation, the world’s 13th biggest economy with among the world’s highest median wages, but it is also home to extreme poverty, some of it akin to what we find in developing nations. Australia is hiding its growing poverty crisis that – within a couple of decades – I believe may directly affect one in two Australians.

We are told that 13.3% of Australians live below the poverty line. If the Henderson Poverty was reassessed, as I believe it should, 35% of Australians would be recorded as living in poverty.

I have written voluminously on the ways forward, but here I will highlight only the fact that the Australian nation, in general, is not being told the truth of the extensiveness of its poor and homeless. Poverty, unemployment, homelessness are pronounced in the suicide toll. The poor, unemployed, homeless fill the prisons.

I’ll call out the Federal Government data as false. We are being lied to.

Data is produced from premises. For instance, not all the unemployed are being counted. To be counted as unemployed you have to be registered with Centrelink and follow their rules in terms of looking for work.

If you work one hour per week, you are reported as employed.

Relative poverty is a measure contextualising annual income to cost of living demands and therefore has to do with low-income levels and the accumulation of cost of living stressors.

Absolute poverty describes individuals and families that are not able to provide basic necessities such as housing, food and clothing.

Classism will become this nation’s most hurtful sore and, though it will intertwine, it will subsume all the other “isms”. Poverty is mounting and, as a catastrophic crisis-in-waiting, it will tear at this nation.

Australia’s pensioners will comprise a significant proportion of Australian poverty. Today, a pension averages annually about $22,000. It’s already tough going if that is all one has. Poverty is the biggest issue.

I believe that within 20 years the pension is trending to be worth the equivalent of $70 in present value. That means the pension alone will mean dirt-poor living. Unless Australians have their home paid off by their retirement and $1 million saved in superannuation, they will live their last stretch of life in poverty.

Australia provides more than 400,000 social houses while around 170,000 families remain on the waiting lists. If social housing were to disappear, there would be millions more homeless Australians. In the decades ahead, millions more of such dwellings will be needed — but there is nothing to indicate that they will appear.

Future governments will resort to the worst types of tenements and to poverty-only precincts. That’s guaranteed because present governments – federal, state, local – do just about jack to respond to homelessness and to address poverty.

I also argue that the national unemployment rate is not 5.5% but that it is above 20%, maybe even 35%, of working Australians. 10% of Australia’s labour force is acutely under-employed and more than 1.1 million underemployed Australians are looking to work more hours per week.

The Northern Territory’s homelessness rates are the worst in the nation and are at the higher end of the homelessness scales on the global spectrum. According to the ABS in 2012, 734 in every 10,000 Territorians are homeless. This is more than 7% of the Territory’s people living homeless. 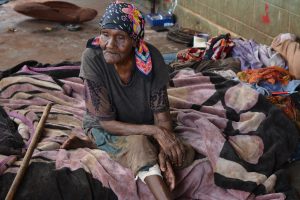 Outside of natural disasters and civil strife, that’s one of the world’s highest homelessness rates. When we disaggregate we find that the 7% translates to 12% of the Territory’s Indigenous Australians living homeless.

Racism, call it institutional or structural, has disgraced this nation to the point of not lifting a finger to help our homeless and poverty affected brothers and sisters. But the future speaks of a time more torrid where this type of mass poverty will be experienced by millions of Australians. Classism will rear its ugly presence and become the new norm.

Imagine an Australia where 10% of its people are homeless, where a quarter of Australians live in extreme poverty and where between half to three-quarters of the Australian population live below the poverty line. It is coming.