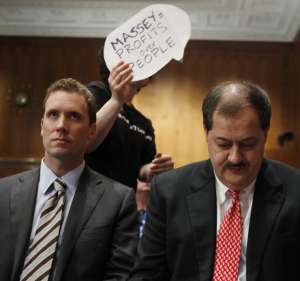 The BHP Billion mining disaster in Brazil raises fundamental questions about the criminal responsibility and liability of mining corporations for the deaths and harms they cause.

This issue is at the heart of a historic trial currently taking place in a Federal Courthouse in Charleston Virginia in the USA.
Donald Blankenship, the former Chairman and CEO of Massey Energy is the first mining baron ever to face criminal charges in the United States over a coal mine explosion that killed 29 miners.
Blankenship is currently on trial for violating numerous safety regulations and conspiring to hide violations which ultimately led to an underground mine explosion that killed 29 miners at the Massey Energy run Upper Branch coal mine in West Virginia in 2010. (A blog piece I wrote about the Upper Branch disaster is here).
The Upper Branch explosion was the worst US mining disaster in nearly fifty years.
If convicted, Blankenship faces up to 31 years in jail on three counts, including conspiracy to violate mine safety standards and hide hazards from Federal Inspectors, lying to securities regulators and misleading investors about safety practices in an effort to maintain Massey’s stick and his fortune.
Four Massey Energy employees have already been convicted in connection with the explosion. One, a former Massey senior executive, currently serving a 42 month prison term, testified to the court that he approved safety shortcuts under pressure to produce more coal.
That Blankenship is facing trail is a surprise. He was one of the most powerful figures in West Virginia where his family owned company Massey Energy ran more than 150 mines with a revenue of $2.6 billion. Blankenship was considered untouchable having bought off politicians and judges and using his wealth and power to exercise influence and expand his coal empire. He pumped millions into West Virginia’s political system to promote an anti-regulatory pro-business conservative agenda and buy favors from state lawmakers, politicians and officials.
Massey Energy had a long “criminal” record of safety and environmental violations at the mine the explosions occurred, as well at its other mining operations. In March 2010 the Upper Big Branch mine was cited for 53 safety violations, and in 2009 the number of citations against the mine doubled and penalties imposed tripled (to $897,325). The mine was the site of other fatalities. Corp Watch cites comments from subcontractors at the mine who said that the mine had been unsafe for years. The company pushed the mine for more coal production- and more profit- at any cost. 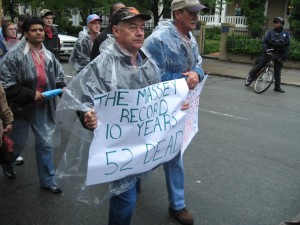 In 2008 a Massey subsidiary paid the largest settlement in the history of the coal industry after pleading guilty to safety violations that contributed to the deaths of 2 miners. The company was continually fined for violations of safety and environmental laws.
The case of Massey Energy (and many other corporations) and the record of BHP Billiton, highlights the need to introduce what Richard Grossman and others call the corporate death penalty- the ability to revoke the charter to operate of corporations that continually and knowingly break the law. In essence this means losing the state’s permission to exist as a corporation, thereby putting the corporation out of existence.
If corporations want to claim the rights of ordinary citizens, to free speech for example, then it is time they and the executives who run those corporations also face criminal penalties for crimes committed against people and the environment.
A long article in Mother Jones about Blankenship and Massey Energy’s downfall and the power he exercised in West Virginia is here. Reports on the trial by the New York Times are here and here.
Categories : General News