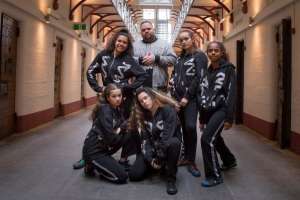 But what of words when no one acts on them? How many more words, statistics, how many more portrayals of the grim realities?

Rapper Briggs tells it best in the Spinifex Gum song Locked Up;

“They put our kids in the system – Findings, reports and royal commissions, numbers, statistics when they’re making decisions… Assess the risks and build another prison.”

Prisons are horrid places. In general people come out of prison worse than when they went in.

Briggs, “When they get told they’re no good, stand them in line and you make them go last.”

Briggs warns us all, “Remember that they’re kids (and) not a campaign policy.”

As a society we should be demanding that compassion rules and where prisons are to be had that they are places of compassion, of opportunities, of the restorative, of a dawn of new meanings and contexts.

As Briggs sings, “Treat them like (shit) you just make them better criminals.”

Choruses sung by Marliya highlight, “Take this silence and blow it up.”

“Not going to disappear – We still here – scream in your other ear, you will hear.”

“Just ‘cos they’ve been locked up… this cut’s a cut on us… this justice isn’t just.”

“This count’s not adding up.”

If we are to understand the enormity of what I believe is a humanitarian crisis with far reaching generational implications we need to understand the following. Nearly 100 per cent of incarcerated First Nations descendants are people who live below the poverty line. It is almost negligible the number of Aboriginal and/or Torres Islanders who are incarcerated who were living above the poverty line.

300,000 First Nations descendants live below the poverty line, with a significant proportion living in extreme poverty. The intersection of poverty and incarceration is where we must focus. Overall, the authentic pathway to significantly reduce offending and the prison population are to lift people out of poverty, to improve life circumstances.

More than one in three of First Nations peoples living below the poverty line have been to prison.

If the ways forward are not dedicated to tackling poverty whether extreme or relative poverty then they are not the ways forward. More people than ever before will continue to be left behind.

I have estimated that by 2025 we are headed from today’s nearly one in three prisoners comprised of First Nations descendants to more than on in two.

Leave a Reply to R Davis