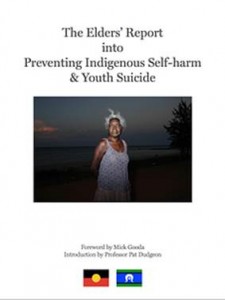 Over the next five years $534 million will be cut from Indigenous programs but all the existing suicide prevention care funding and additional funds that were personally committed to me by the Federal Minister for Indigenous Affairs, Nigel Scullion remain intact. I have had this commitment reinforced to me late on Budget night and again this next morning.

The overall budgetary hit on First Peoples – to the tune of $534 million over five years – is a huge hit, a surprising one when we must consider that the Closing the Gap is not happening, that divides are not being bridged, that chronic diseases and extreme poverty are rampant. If anything, the $534 million that has been deemed unnecessary should have been in the least shifted to infrastructure, social services, economic development, to so many communities and programs crying out for support.

The Budget has been delivered with revenue write downs it should not have incorporated and with economic growth rates that are significantly understated but which were a ploy so as to justify the cuts and the more justifiable deficit levy on those with very high salaries. There is no excuse fathomable in the Australian body politic for savage cuts to any sector affecting First Peoples. More than 150,000 First Peoples live in extreme poverty while 80,000 live in third-world-akin conditions and who endure multiple chronic diseases.

My great concern is that this tough budget on the First Peoples will culminate in further deprivation, disadvantage, multiple trauma, will compound ill health and destitution and culminate in even more self-destructive pathways and in more suicides. Reportedly, one in 24 of all deaths of First Peoples each year are by suicide, but my research argues that it is more like 1 in 12 to 1 in 16 of all deaths.

Senator Scullion’s Office advised that they have kept the promises they made to me only weeks ago at the Commonwealth Offices in Bligh Street, Sydney. They will ensure the suicide crisis is given priority, that a team to oversee it will be formed, and that Dr Tom Calma and Professor Pat Dudgeon will lead the way. I had advised that Dr Calma, Professor Dudgeon, and NACCHO’s Justin Mohamed should oversee suicide prevention care. I had been included in all this on the back of my research and the sustained coverage of the tragedy. This small body of people must bring together the coalface workers – Adelaide’s Tauto Sansbury, Perth’s Robert and Selina Eggington, the Central Desert’s David Cole, the Kimberley’s Wes Morris, and so many others to not only address but to end the suicide crisis.