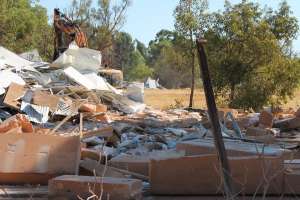 In breaking news, the Western Australian State Government sent in demolition contractors to raze the vacant residences of the Swan Valley Nyungah Community. Emotions ran high among former residents, many of whom remain homeless. They only learned of the demolition as it was happening such was the clandestine nature of the Government’s underhandedness. Many have been homeless since 2003, and fair to write, the then Geoff Gallop Government evicted en masse all the residents in a knee jerk reaction to what later proved to be unsubstantiated and false information about rife sexual abuse.

Natural justice was denied then, it was denied again today – eleven years later. 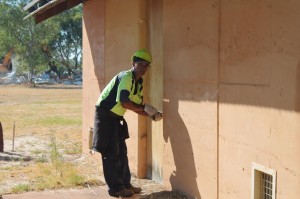 The then State Government broke a prescribed promise to transition all the residents to State Housing and to assist with other various services. The Government never kept this promise, they could not even do this. Nothing was done to help the former residents, not once in the eleven years.

Just recently, the Swan Valley Nyungah Community launched a campaign calling for the reopening of the Community and for the homeless to be returned to their homes. 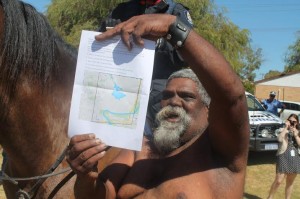 Only last week, community rallied on the steps of State Parliament to launch the call for the Community which had remained idle for eleven years to be reopened. Premier Colin Barnett was approached with a question as to whether he would consider this and he responded to the reporter with “NO”.

Despite a change.org petition to Premier Barnett and despite another rally scheduled for the heart of Perth, Forrest Chase, for noon April 2nd, Premier Barnett moved without notice to oversee the unexpected demolition of the site, with the objective it will be outrageously transformed into a park – “Reconciliation Park” – what a disgrace. What a horrific act of inhumanity, and indeed of ugly racism. I, Gerry Georgatos, do not intend this article as ordinary journalism, but as an extraordinary subjective statement of the facts as I know them, and I take this move standalone with ownership of these words, and if Premier Barnett wants to litigate, I will stand in the Supreme Court and swear by my words and truth despite whatever consequences the imbalances of a justice system leveraged for the wealthy and privileged dump on me. I have been there, so no worries from my end. However I will not stay silent and not say it as it is. 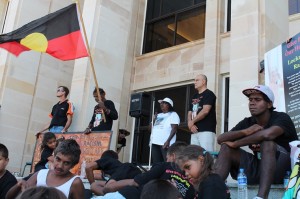 Homeless Nyungahs, induced into homelessness by a ruthless State Government, turned up this morning to the locked gates of their Community to be shocked by the demolition. The Stringer was on site, witness to a young homeless male saying, “White people cry when their houses are burnt, when they lose their memories, well for us this site is where my memories were. I played there, I swam in that river. Here are my memories.”

He now lives on the street.

Another homeless person said, “I woke up one morning (on the street) and my friend had passed away during the night. We were kicked out of our homes and no one cares. Who cares for a black person? Certainly not a white Government.”

He still lives on the street.

Elder Bella Bropho said, “We will continue to fight for our Country, we have a serious issue to contend with our homeless.”

I phoned Kija woman and parliamentarian, Josie Farrer. Ms Farrer was in shock and near tears upon hearing of the demolition of the Community.

“This happens to our people all the time.”

“The Barnett Government did it to our people in the Kimberley, at Oombulgarri, made them homeless, moved them on.”

“It is still a white person’s world.”

Supporter Niormh Healy was on site during the demolition.

“I cannot believe what happened. The building right over there at the back held paintings that were sacred to the Community. The images of a baby.”

Community stalwart Herbert Bropho was devastated. “What is happening to my people? Just put a bullet in my head and end it all now. Do you want to see a Black man, see what you have done to me, and to my people?”

“My mother died in that house over there that is now rubble.”

Mr Bropho was one of three issued with a move-on-notice by police.

Police were present – en masse – four on horseback, four police wagons, and a dozen officers. Security numbered at least a dozen. Two CCTV cameras were installed on the site during the week without notice obviously at the direction of Government.

It is a Kafkaesque disgrace.

Western Australia is the nation’s backwater of racism.

Hopefully Ms Farrer can stand up to the racism that is rife in the Western Australian Parliament.

There is now nothing left but rubble. The Government did not have the moral right to raze the homes, maybe not even the legal right – they were built by funds secured from the now defunct ATSIC. The Community hired the architects and gave of its labour. The hundreds of thousands of dollars that it would have cost then – 1997 – are now in the millions. Despite, already having rejected calls for compensation, the State Government should in the least compensate the former residents the financial value of their loss and at least alleviate some of their discomfort. The spiritual value, that goes to the heart of ones form and content will not be remedied by financial compensation alone.

West TV’s coverage of the Parliamentary rally by the SVNC here: