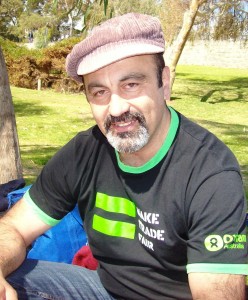 Gerry Georgatos is a life-long human rights and social justice campaigner, and an award winning investigative journalist. He forayed into journalism for several years. His predominant work is in suicide prevention research and in unveiling racism and in articulating the ways forward. In 2011, he left a management background and the tertiary sector and found himself called upon to contribute as a volunteer journalist, predominately for The National Indigenous Times, and for The National Indigenous Radio Service, where his sustained coverage of stories led to positive outcomes and in 2012, 13 and 14 won seven national awards, including Journalist of the Year at the 2013 Multicultural and Indigenous Media Awards. His breakthrough stories on the Native Title Act and the Yindjibarndi launched one inquiry (by The National Native Title Tribunal). Some of his stories on homelessness in First Nations communities have led to many people housed and to restorative cultural projects. His writings are predominated with a focus on the poor, the marginalised, the incarcerated. His social justice campaigns include his ongoing work with the homeless, asylum seekers, people in prison and post-release, his anti-drugs campaigns, fighting racism and discrimination, and his freedom of speech campaigns.

Gerry has completed two Masters trying to understand the ways forward from racism. He has fought a number of campaigns, often at great personal toll, in trying to eliminate racism, including from universities – he was once told by a university official, “What do these blacks want? An education? Send them back to the bush where they belong!”

Gerry is currently completing a PhD on Australian Custodial Systems and the incarcerated and how to transform lives.

During one of Georgatos’ visits to an Australian adult prison to talk to prisoners about future education and employment opportunities he came across a number of Indonesians who appeared to him under age. Soon after while visiting an Immigration Detention Centre he met an Indonesian boy who told him he was 15. A month later on a visit to the same prison where he believed he had come across under age prisoners he came across the Indonesian boy. Then began a near two year campaign to release Indonesian children who had been wrongly imprisoned in Australian adult prisons. His campaign would include parliamentarians, Foreign Affairs ministries (Australia and Indonesia), the Australian Human Rights Commission, lawyers and journalists Australia wide. His behind the scenes work to free these children was pivotal.

Most of these children have been released, however at the time of their release, Georgatos believed a national inquiry should have taken place to review all Indonesian prisoners, to ensure no further ‘age disputes’ languished.

Gerry Georgatos’ campaigns in recent years in highlighting the extensiveness of the suicide crises globally, nationally and among First Peoples in countries with relatively recent colonial oppressor histories are second to none. He has become the most voluminous writer in the nation on the extensiveness of suicide and on the immediate ways forward. The Stringer, The National Indigenous Times and The National Indigenous Radio Services, collectively, have published more than 200 contributions by Georgatos in the last 18 months alone. His advocacy journalism, his research, and his lobbying of Government has been responded to by Federal Ministers, by Prime Minister and Cabinet and by institutions in the field. But he says that there is a long way to go, “the sooner the better”.

Georgatos is considered by some as a ‘polarising’ and ‘controversial’ writer and social justice campaigner. He is an expert in his fields, particularly in the understanding of racism and in suicide prevention – and involves himself at the coalface in addition to interfacing with Governments. His advocacy style can at times be confrontational. He works with a sense of urgency. He travels widely. He has a ‘relentless crash through style’ and is resilient when it comes to hatchet jobs on him or when he is persecuted or ostracised. “You let this stuff slide,” he said. His diverse lived experiences, his compassion for others, his various expertise make him a valued contributing journalist and writer for The Stringer. He writes for The Stringer without charge.