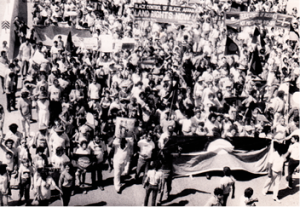 The call for a National Summit of Traditional Owners announced last week by three icons of the First People’s struggle, Tauto Sansbury, Geoff Clark and Michael Mansell, has gained momentum. They have been inundated by the true leaders of First People from all around the continent. Many Elders believe there is a tumultuous political climate and that they are seeing an inevitable fast-tracked land grab by this Government and by coteries of already wealthy predatory carpetbaggers. They believe that they are at the crossroads, that if they do not stand up united and strike back that what little has been won in the last 50 years will be lost forever.

A National Summit of Traditional Owners originally intended for Tasmania will now be held in the heart of the continent, in Alice Springs. The gathering of the true leaders of their people, where it is hoped that every First People’s nation will be represented will also be known as the Summit for Freedom. The date of the November event is yet to be confirmed but it will not clash with the G20 protests where it is believed that many leaders from around the continent will gather to highlight the ongoing First People’s rights struggle.

The son of legendary rights activist, Dr Gary Foley, Roxley Foley said to a large audience in Adelaide last week, “We are facing the darkest times I have known. We are facing attacks from all quarters. The (Andrew) Forrest review is one of the worst attacks I have ever seen.”

Mr Sansbury said, “There is a land grab coming. But we can stand in its way and by standing as one we cannot only protect our lands but we can win our rights, our justice, end the social ills, smash down the inequalities.”

“Michael (Mansell), Geoff (Clark) and I have spoken with many and we have agreed that this coming together of our people from all across this continent should happen soon, and it will now happen in Alice Springs. This Summit is about the challenges we face, the fight to stop this land grab that will leave us poorer and more broken than ever before but it is also about our freedom.”

“We must believe that nothing is more important than our freedom, no more the bits and pieces, no more some crumbs while we accept oppression in one offensive form or another. The Intervention, we shall be done with it, so too income management, so too all the other racism. It is time for us to take back our fight for justice, and take control of our affairs and end the extreme poverty, end the homelessness of the far too many of our people, end the racist imprisonment rates, the jailing of our people, end the national disgrace that is the suicide crisis.”

“The Indigenous Advisory Council does not represent our people. It cannot advise on our behalf, it does not even know us. They do not walk with us or alongside us. They are not an advisory body but a mouthpiece.”

The Summit has been moved to Alice Springs to enable more Elders and leaders to more easily make their way.

“We are being inundated by support and pledges but we will not let finances undermine our people’s dreams and hopes, our right to be free in our own lands.”

Mr Sansbury said he has also written to the Federal Minister for Aboriginal Affairs, Senator Scullion, asking him to assist in funding the Summit.

“When we assemble, everyone will take notice of us, there will be no choice. Senator Scullion should assist us with funding. We believe that he is wiser than the others and will see the writing on the wall. He should stand right by us in bringing this assembly of our people together. If Minister Scullion wants to be informed about what our people are about then he will listen to us.”

“We will formally speak to him in the coming days. Any Government, whatever their political persuasion and backbone should support an assembly of the legitimate representatives of our people,” said Mr Sansbury.

“Any Government that does not support such an assembly of our people then does not believe in democracy, is racist and serves others, not us.”

Mr Mansell said, “If you want to remain credible in the eyes of Aboriginal people you take the bottom-up approach, you elect people from the communities to represent their people. You do not do this handpicked approach of ‘advisers’ as the Prime Minister has, picking people only who will say and do the Government’s bidding.”

Mr Clark said, “Our people want to come together, the political climate over a long period of time has culminated in us having had enough. We will determine our agendas.”

Mr Foley said there has never been a more “opportune time” on the political landscape to “mobilise our people to stand together to take on the greatest threats that I in my thirty years have ever seen.”

“We will send delegations out into the communities to ensure that everyone knows what is happening and that we are ready to do something about it.”

In my extensive travelling around the continent of late, as word spreads about the G20 protests and of the call for the largest gathering of the legitimate representatives of all First People, and the call for a historic Summit for Freedom, there is excitement, there is a body politic growing around the “big issues”, there is a sense of hope replacing despair.