Forced to dance to the White Man’s song – Australia, steeped in racism 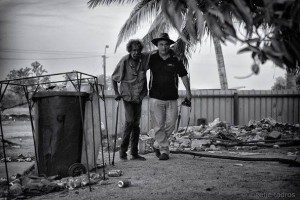 A Wiradjuri Elder once said to me, “There is a sickness in this country, and it is called racism – we stand in it knee deep.” Whether you are Black, Brown or Yellow, the only way you can majorly get ahead in the ways White Australians do is to sing the White man’s song, and dance to the White man’s song – do as they do or be damned. This is what assimilation means – do as they do, be as they are, deny who you are, betray truths, turn against your own (heritage).

Racism has cast its filthy scoundrel from the beginnings of civilisation, if not before – but the onset of civilisation has allowed for its articulation, its justification, its further enablement even on the most despicable terms. Despite the fact that racism has been churned throughout humanity there has been no worse racism than that cast by western Europeans, who pillaged ‘Africa’ of millions of human beings – and cast people as if lesser than, fit for no more than the lifelong torture of ‘slavery’.

The White man articulated one justification after another; their Courts enabled law after law, to justify racism, to turn human beings into chattel. To this very day and long into the future, we feel the effects. Generations to come will still not be free of racism.

Our parliaments remain dominated by White Australia, they continue to fail to reflect the demography of this nation. Those few who are not White but who have scored a gig in our White Australian parliaments have had to do a lot of compromising – do the ‘lip service’ again and again and again. Australia is typical of the desperation of nations with relatively recent colonial oppressor histories. The oppressors cling to the premises of themselves and of who others are that are generations old, but they wash through the generations. The oppressive apartheid and eugenics are never gone, they carry on in others, packaged however. The White Australia Policy flourishes in terms of set expectations and imposts even when it is not so dastardly to keep someone out of the Country purely because of the colour of their skin.

With racism still alive, but with the unfolding changes in the social justice vocabulary our parliamentarians and media commentators have become skilled at keeping to themselves what they really think about our other cultures and about racial divides and homogeny and instead say one thing while doing the damage. Others, like our incumbent Prime Minister, wear heart on sleeve and say what most of them think. This honesty is turned on by parliamentary colleagues and by others highly placed because the lesson that Mr Abbott is not heeding is that in this generation you are to keep your mouth shut, push the lies and just rollout assimilation with sleight of hand. But, well Mr Abbott may be one of the more honest politicians we have come across. He is described as a master of the gaffe – but are they gaffes or his truth?

Our parliaments do not reflect the demography of this nation, our media does not reflect the demography of this nation – media panels are effectively White only bastions – with a ‘Black’, ‘Brown’, ‘Yellow’ person scoring a gig if they play by the rules. Our economy is run by corporate boards and institutions that are White dominated. Instead of the coalescing of humanity, the language everywhere is about shoring up White power – even when they refer to the ‘Asian Century’ it is racially divisive terminology to promulgate fear, to in effect shore up White power.

What our parliaments, political parties, media and corporate bodies and institutions have got away with to this day, in supporting exclusively White power – at the expense of humanity – washes right throughout our societies, through every layer of society. Even in social justice groups, even among grassroots activists, Whites want to speak for Blacks, Brown, Yellow; there are White activists who want what the oppressed have to say polished up in White language, in White terms of reference. They miss or defeat the point, and all they do is hold everyone back.

At the core of things, our governments and our media do not want Australia to hear the truth about itself; to hear about this nation’s vile racism. They also do not want us to understand that the future we are building will be on racial divides and with this never ending cruel bent for assimilation. That this future will bring on racism that we have not known the likes of during the last half century – that it will be disturbingly discriminatory, disempowering, oppressive  and at times violent.