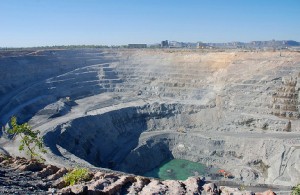 Western Australia will be exporting uranium within two years after the Federal Government granted environmental approval to Toro Energy’s Wiluna project – To many people this was unexpected, including to Wiluna’s Aboriginal peoples and to anti-uranium mining and anti-nuclear advocates nationwide.

Toro Energy needs to reach a mining agreement – an Indigenous Land Use Agreement (ILUA) – with the two Native Title claimants in and near Wiluna. This though will be little problem for them despite many within the Aboriginal communities – Wiluna and Tarlpa peoples – vehemently against uranium mining on their Country. Wiluna senior Elder, Glen Cooke has been a long time outspoken critic of uranium mining.

“Uranium should stay in the ground. It can hurt our Country, the environment, our people, our children, our children’s children,” said Mr Cooke.

The Native Title Act is set up in such a way that both parties must enter into ‘good faith’ negotiations and hopefully come to a mutually beneficial deal within six months. If this fails you can count on the mining still going ahead. You can also count on the National Native Title Tribunal in granting the various licences required by the resource company and you can count on the Office of the Registrar of Aboriginal Corporations to stand idly by.

Once Toro’s project is operational, with a timeline of 2015, hence two open-cut mines at Centipede and Lake Way will produce at least 780 tonnes of uranium oxide a year – for at least 14 years.

But the Conservation Council of WA anti-nuclear campaign coordinator Mia Pepper believes Western Australians can stand in the way of uranium mining.

“The Federal Minister’s approval is an approval before the data is complete.”

“Toro still have huge gaps in their proposal, they have not secured, identified or done an impact study on water use for the life of the mine, nor have they completed geotechnical studies on the lake bed where they intend to store 9.1 million cubic metres of radioactive mine waste,” said Ms Pepper.

“This conditional approval is not a final approval as the conditions (by Minister Burke) spell out a number of new areas of approval Toro need to get alongside the mine closure plan, the land clearing permits, export licenses and more.”

Minister Burke’s approval came with a suite of conditions – 36 of them. One of them is that a guarantee is provided by Toro Energy that radiation does not pollute ground and surface water. The Minister may be looking ahead to what may eventuate – Coal Seam Gas fracking has embarrassed Australian Governments – Federal and State jurisdictions – with the obvious that the gas is leaking into underground and ground water systems despite denials from the industries and their underwriters, Federal and State Governments. 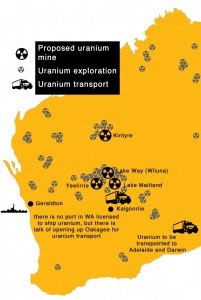 But well placed insiders in the resources sector have told The Stringer, “For a long time the writing has been on the wall. Uranium mining will occur and it will be widespread. The nuclear age will come to Western Australia. The WA of 2030 will be different to the one of 2013. There will be at least 40 mining sites around the State in 2030, and WA will have nuclear reactors.”

“People may get sick at uranium mines and in transporting uranium and in other future plants and sites that will depend on that uranium but that’s par for the course. No-one will be forced to work in them, people do know the risks. Governments know the risks, the resource sector knows the risks but I am telling you this is what will happen and it is has been in the advanced planning stages for quite some time.”

Every month three trucks will carry concentrated powdered ore which will have been sealed in drums and each with a United Nations inventory number. The trucks will make a 2,700 km journey to the Port of Adelaide.

“The plastic-lined drums are sealed and locked in pallets and we monitor the (radiation) exposure to the drivers who would be closest to the product.”

“The proposed mine will be the most advanced of the new generation of uranium mines in the world.”

He said uranium mining will provide social and economic benefits to local communities and to Australia.

This was reminiscent of once former anti-uranium and anti-nuclear campaigner, Federal Labor minister Peter Garrett – former Midnight Oil lead singer. It was only a couple of years he was defending the Government’s decision to mine uranium and he argued Australia “has the world’s best practices” in mining uranium and with their nuclear reactors.

Ms Pepper said there is still time to halt the push for uranium to be mined.

“It is a long way from a Federal approval to an operating mine and we will be there every step of the way contesting and opposing this uranium mine and any other proposed uranium mine in WA.”

“Uranium is different. It is radioactive and poses great risks to workers, communities and the environment.”

“Uranium oxide can be very dangerous if ingested or inhaled.”

“Other breakdown products of uranium can also be dangerous – like Radon gas,” said Ms Pepper.

“Radon gas is the second biggest cause of lung cancer in the world.”

“The biggest concern with uranium mining is the long-term impacts of radioactive mine waste on country – how that is contained, whether that will get into the groundwater and the food chain.”

“There has never been a successful uranium mine in Australia. Each one has had its accidents, its spills, its leaks and its failed rehabilitation.”

“The Aboriginal communities that will be near these mines have legitimate concerns on how uranium mining and potential radiation fallout will impact on the environment – the animals, bush tucker, and their townships. Toro have done some opportunistic studies on road kill (dead animals) but they have not done detailed data analysis on the fauna passing through the region,” said Ms Pepper.

“Uranium is the asbestos of the 21st century.”

“The World Health Organisation, the United Nations and other international agencies recognise the risks of radiation and they all say that safe dose of radiation.”

“What they are saying is that every dose of radiation increases the risk of developing cancer,” said Ms Pepper.

Elder Glen Cooke said that people within his community will inevitably die from radiation related sicknesses. “They are going to kill our people, some will die quickly, some by a thousand cuts.”

“We don’t want Maralinga all over again where our people will be hurt and die sick and young, and then for decades the truth will be hidden.”

Angst has ripped through Aboriginal communities at Wiluna and Yeeliree.

“The Government has not said they can guarantee there will not be radiation poisoning of people,” said Mr Cooke.

Yeeliree Traditional Owner and chairperson of the Western Australian Nuclear Free Alliance (WANFA) Kado Muir said that if uranium is mined a catastrophe is inevitable – only a matter of time.

“The Government and these mining companies are putting human life last.”

“How many Western Australian communities suffered lead and aluminium poisoning from leaks along freight routes and in the refineries despite all the promises that it would not happen?”

WANFA is a State wide anti-nuclear association whose members are Aboriginal Elders. Mr Muir said WANFA will “challenge the Australian Uranium Association’s Indigenous Dialogue Group who are representing the industry rather than a true Aboriginal community view.”

“We will also continue to expose anthropologists, archaeologists and pro-industry consultants who attempt to validate negligent practices of the mining industry.”

WANFA is calling for an independent public inquiry or royal commission into uranium mining. “We need an inquiry and when this happens then maybe Governments and the nuclear industry will be forced to stop minimising and trivialising the dangers of radiation,” said Mr Muir.

For each of the last two years at least a hundred walkers have walked the Walkatjurra Walk – from Yeeliree to Leonora to send the message to resource companies and Governments that they do not want the land they walk on mined for uranium. Mr Muir has been on both walks and will walk this year’s May 4 to May 28 walk.

As a result of Minister Burke’s approval to Toro Energy it is now expected hundreds if not thousands may attend this walk.

Ms Pepper said the annual third anti-uranium walk in the region to be affected by the prospect of uranium mining “has been gathering local momentum through ranger groups and the local community.”

“This represents the end of a war of words and so begins the battle on the ground.”

–          The 27th anniversary of the Chernobyl disaster falls on April 26. To this day the real death toll from the nuclear disaster is not known but it is more than the official record.

The Russian Government’s official death toll for Chernobyl is 46 but according to anti-nuclear campaigner, Dr Helen Caldicott it could be as high 985,000. What is on the record is that there has been a significant rise in cancer rates in the affected region.

The long latency periods, as with asbestos related mesotheliomas, have skewed the data on the incidence of radiation related disease.

In 2006 the Biological Effects of Ionising Radiation (BEIR) Committee of the US National Academy of Sciences reviewed the available data.

Their report stated, “The risk of cancer proceeds in a linear fashion at lower doses without a threshold.”

“The smallest dose has the potential to cause a small increase in risk to humans.”

Dr Caldicott investigated a Russian report, “Chernobyl: Consequences of the Catastrophe for People and the Environment”. Underwritten by this report she argued 985,000 eventual deaths.