Feed the Little Children – the Durhams show governments the way! 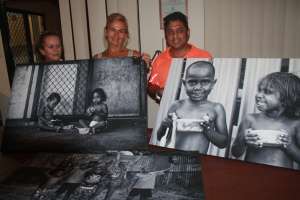 Feed the Little Children’s Deb and Clint Durham with Broome based international award winning photojournalist Ingetje Tadros in the middle. Ms Tadros has donated her photography of the children the Durhams help for a fundraiser – Image, Gerry Georgatos

The Kimberley is enjoyed by tourists and by most of its local population but for a significant number of the total population it is a place of extreme poverty and disadvantage. Nearly seven per cent of the Kimberley is homeless, an unbelievable situation in contemporary Australia, one of the world’s wealthiest nations. Thousands of the Kimberley’s children are malnourished. This is where the charity Feed the Little Children comes in and puts governments to shame.

The acute poverty of a significant proportion of First Peoples families cannot be missed in and around Broome, home to one third of the Kimberley’s population. This is where locals Clint and Deb Durham stepped up and are making their little bit of difference to the lives of so many children. They could no longer wait for governments to scrub up – Federal, State, Local – to do something about the malnourishment of children. The Durhams made up their minds they could no longer live in a small town, in proximity to shanty districts where many toddlers and infants go hungry.

How is it that in the mining boom State of Western Australia, in the wealthiest State in Australia, in the State with the world’s highest median wages, that so many children go hungry? But rather than spend forever and a day lobbying for change, a very tough gig, the Durhams have gone for what change they as individuals could pull together.

Mr Durham is a 17-year-intelligence analyst with the Western Australian police and in his time with the police saw the spiral that eventuates from pronounced poverty. It is all intertwined, extreme poverty, crime, incarceration, broken lives. The Kimberley has among the State’s highest arrest rates, juvenile and adult. Young Aboriginal offenders stead some food or steal some money for food, it is the way it goes the world over wherever there is concentrated poverty.

“Too many children malnourished, and we as people have to do the right thing and do what we can. In Broome the majority of children going to bed without a decent meal are Aboriginal kids,” said Mr Durham.

“Deb and I decided to get them meals and that is how Feed the Little Children began.”

They commenced with just the two of them with Deb cooking the meals. Soon they had volunteers helping out with the cooking, the deliveries, the engaging with families and children.

Broome is only a population of 14,000, so it is incredible that the Durhams are responsible for feeding 350 children every week.

“We have grown into a charity and Feed the Little Children started with 100 meals a week to now being able to provide meals to 350 children every week. Our volunteers drive out meals to homes and to the communities of One Mile and Kennedy Hill.”

One Mile Community is a leftover byproduct of Australia’s apartheid. It is a sad place, with people effectively corralled in shanty town poverty and dysfunction. I have spent time at One Mile on occasions and have yarned with many of its residents. It is a national disgrace, and Western Australian Government certainly does not include it in its tourist advertisements.

Broome has a state housing waiting list of 638 applications, thousands of people in other words. It will never be met. I met one person who finally got into state housing but who waited 24 years. This person believe it or not is one of the luckier ones. The homeless rate of the Kimberley is 17 times the national average.

The Durhams refuse to turn a blind eye to the children of Broome that our governments obviously do. But if Governments reckon they are not turning a blind eye then it is fair to comment shame on them for doing next-to-nothing.

Mr Durham, former police intelligence analyst made the connection between juvenile property crime and the factors of poverty and hunger. What the Durhams have been doing for the children of Broome clearly should signify the ways forward that governments should journey.

Ms Durham was a canteen manager at the local Catholic school, St. Mary’s – and eventually with the support of St. Mary’s school they expanded Feed the Little Children.

“A lot of the children come from dysfunctional families. It is just circumstances beyond their control in many of the cases,” said Mr Durham. “There is nothing deliberate in what parents and families do who are trapped by acute poverty.”

The Durhams began the charity from their home. Using industrial sized pots, Ms Durham started cooking up enough food to feed more than 100 children each week. Ms Durham with a striking humility does not have a bad word to say about anyone, including government departments and agencies.

“Deb would cook Saturday mornings and we’d get to the children late afternoon,” Mr Durham said. “After a while they knew we were coming and they’d be there every Saturday afternoon, however since securing a couple more cooks and many more volunteers we are now able to start cooking and delivering on Wednesdays as well.”

“We want to roll out Feed the Little Children in the major towns and communities across the Kimberley, places including Derby and Kununurra and as far south as the Pilbara’s Hedland.”