Western Australia will be exporting uranium within two years after the Federal Government granted environmental approval to Toro Energy’s Wiluna project. Aboriginal Elders and communities are upset and have vowed to stand in the way of uranium mining on their Country.

Yeelirie Elder Kado Muir, who is also the chairman of the all Aboriginal Western Australian Nuclear Free Alliance (WANFA) said that Country is threatened “by the poison that is uranium and that everything that can be done to stop the mining of uranium must be done.”

Premier Colin Barnett is all for the mining of uranium and has been pushing the industry’s line that it will provide a ‘valuable’ export commodity for Western Australia.

But Mr Cooke disagrees. “Uranium should stay in the ground. It can hurt our Country, the environment, our people, our children, our children’s children,” he said.

Aboriginal Elders and conservationists took to the streets of Perth the day after the news broke of the Federal Government’s approval and vented their disgust. They have vowed to use civil disobedience to stop the project going ahead. WA’s former Australian Senator Jo Valentine, the figure head of the anti-nuclear movement took to the streets with the Elders and other protesters. The protesters turned up to the West Perth offices of Toro Energy in huge numbers and held a vigil while making their feelings evident.

Once Toro Energy’s project is operational, with a timeline of 2015, two open-cut mines at Centipede and Lake Way will produce at least 780 tonnes of uranium oxide a year – for at least 14 years. 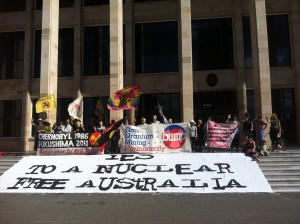 Conservation Council WA anti-nuclear campaigner, Mia Pepper said there is still time to save show. “The Federal Minister’s approval is an approval before the data is complete.”

There are 36 conditions attached to the approval but going by past histories they’ll be a hop, skip and jump.

“Toro still have huge gaps in their proposal, they have not secured, identified or done an impact study on water use for the life of the mine, nor have they completed geotechnical studies on the lake bed where they intend to store 9.1 million cubic metres of radioactive mine waste,” said Ms Pepper.

But well placed insiders in the resources sector have told The Stringer, “For a long time the writing has been on the wall, Uranium mining will occur and it will be widespread. The nuclear age will come to Western Australia. The WA of 2030 will be different to the one of 2013. There will be at least 40 (uranium) mining sites around the State in 2030, and WA will have reactors.”

Mainstream newspapers are running editorials pushing the lines of the uranium industry and Premier Barnett that in economic and social terms there are benefits for Western Australia, and that uranium is “a valuable export commodity.” Critics of the industry have often pointed to the relationship these resource companies have built and enjoy with both the mainstream press and the Government and allege a culture of favour-dispensation.

Australian Uranium Association CEO Michael Angwin has jumped into the fray with opinion pieces in major news media to counter the Conservation Council’s Ms Pepper’s recent opinion pieces and stances. He is pushing the uranium industry is safe and that risks can be contained.

Ms Pepper disagreed and she said all of Australia’s uranium projects have failed these attributed standards. She said there have been spills, leaks, accidents and the failure to rehabilitate sites.

“Uranium mining will be to our generation what asbestos was to previous generations,” said Ms Pepper.