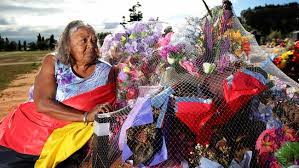 Carol Roe, at the grave of her granddaughter Miss Dhu in Geraldton, says her grieving family members ‘don’t want any more kids to die like this’.
Image – www.theaustralian.com.au

It has been more than six months since a 22 year old Yamatji woman died in horrific circumstances in a Western Australian jail cell. Her family is devastated State Government promises that answers and real changes in her name would be provided are yet to arise. Ms Dhu’s family said that the wait has been both heart wrenching and tortuous.

In October last year, Western Australian Premier, Colin Barnett surprisingly turned up to a rally for justice for Ms Dhu at the steps of State Parliament. In the midst of a media scrum, he made a personal pledge to Ms Dhu’s mother, Della Roe, that he would ensure an expediting of answers. The Premier also made a personal commitment to the large crowd that he would work closely with the justice system to reduce the number of First Peoples in jail and juvenile detention. He is yet to deliver on either of these.

Ms Dhu’s grandmother, Carol Roe said, “It’s been more than six months and we have not had sufficient responses from the coroner. We are still waiting for answers about what happened. We are still waiting to find out why and how. We were not able to deal with Christmas, we were not able to do anything as a family. We need answers and we need some justice. We need an independent inquiry into what happened.”

Ms Dhu’s mother, Della Roe said, “I just want some answers about what happened to my beautiful baby.”

An uncle of Ms Dhu, Shaun Harris, who has led a six month long campaign around the nation for his niece, said that the family “has been devastated, shattered.”

“The Government promised to provide answers and make a difference for our people in my niece’s name but instead they are making things worse with little or no responses.”

Ms Dhu was detained in a police lock up on unpaid fines, something that I know police do not want to be doing, but Western Australia’s laws on unpaid fines are not in sync with the most of the rest of the nation. I have campaigned directly to the Federal Minister for Indigenous Affairs, Nigel Scullion who agrees that jailing fine defaulters is not an answer, despite State Minister Joe Francis’ evocative support for these punitive measures. Senator Scullion also supports the implementation of the Custody Notification Service as is the case in NSW and the ACT and is encouraging the Western Australian Government to implement it. Had it been in place in Western Australia, Ms Dhu would have been availed to a stout advocate who would have ensured her legal, welfare and health rights.

Kamilaroi man, Griffith University academic, Dr Marcus Woolombi Waters, said, “Twenty-two year old Aboriginal woman Ms Dhu spent the last four days of her life vomiting up blood in agonising pain in a police cell, and was taken to hospital three times only to be released back into police custody as she lay dying.”

On February 25, there will be a collective deaths in custody rally on the steps of Western Australia’s Parliament. It will be more than seven months where on those same steps Premier Barnett gave his personal undertaking to ensure answers for the family on what happened to their loved one, where he castigated what happened to her, and where he also made his much publicised comment that he would work firsthand to reduce the number of people in our jails.