Esperance WA: Sacrifice zone for the profits of the uranium industry? 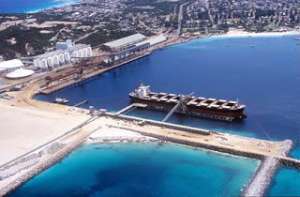 A mining industry media outlet has reported that the uranium industry in WA is keen to establish Esperance on WA’s southern coast, as a port export hub for radioactive uranium material mined in Western Australia.

The Canadian uranium miner Cameco, whose Yeeleerie uranium project is billed as the largest in WA, is located near Wiluna in WA’s Northern Goldfields,  however, Wiluna is a considerable distance from Port Adelaide and Darwin, the only two ports in Australia approved for shipping uranium. Esperance is the port closest to Wiluna.

The other uranium miner active in WA is Toro Energy who plan to ship product from its Wiluna mine through Port Adelaide, a 2700km journey by truck.

The Managing Director of Cameco Brian Reilly was quoted as saying:

“This is a region that needs the next wave of projects and the uranium sector can deliver four, five, six projects down the track and make a significant difference to WA. The product we ship is a high-value, low-volume product and as it sits today most uranium goes to the port of Adelaide. Why wouldn’t we contemplate a WA port when we get a business case and a number of other projects up and running?”

A weekend article in the Kalgoorlie Miner describes the community’s response to the disclosure and notes that the Esperance community is exceedingly vigilant about the environmental risks from products coming through Esperance, largely as a result of the Magellan Lead Scandal of 2005-2008.

This vigilance and likely public opposition from the people of Esperance is a consequence of  serious harm suffered by the people and environment of Esperance as a result of that earlier lead contamination scandal at the Port of Esperance.

Over 2 years (2005- 2007) Magellan Metals and the Esperance Port Authority allowed lethal lead dust to escape from storage facilities at the port and contaminate the town of Esperance and surrounds. Over 9500 birds died of lead poisoning and hundreds of children suffered lead poisoning from elevated lead levels.
A Western Australian Parliamentary Inquiry found that the Esperance Port Authority and Magellan Metals (and 2 other government agencies) were guilty of “critical failings” in their handling of toxic material in allowing lead carbonate particles to escape during Port operation.

The Inquiry concluded that the deaths of 9500 native birds in December 2006 and March 2007 resulted from lead poisoning from Magellan Metals lead carbonate concentrate which had been handled by the Esperance Port Authority from April 2005 until March 2007. A quarter of the children under 5 years of age who were tested showed a blood lead level over 5 µg/dL.

The Committee concluded that the exposure of the Esperance community to lead was a result of:

The Report found that the Esperance community had been let down by the actions of the Esperance Port Authority, Magellan Metals and the WA Department of Environment (DEC).

The Esperance Port Authority was fined over half a million dollars after admitting responsibility for the lead poisoning. Magellan Metals escaped without any serious penalty after agreeing to a $9 million settlement to clean up the town. As part of the agreement the State Government agreed not to pursue any criminal or legal charges against the company.

A State Government report released  in 2010 claimed that three years after the crises the poisonous lead dust still present in the town remained a major threat to bird life and animal life but claimed no “serious threat to human health”. Locals were not convinced

Research in 2010 by the Conservation Council of WA showed that local insect eating birds have lead levels in their feathers about 8 times background lead levels. The birds are at threshold level for lead pollution in birds.

So why should the people of Esperance have any faith they will be protected this time around by those with responsibility to regulate mining companies and protect the community, when they failed so badly last time?

During the Esperance lead crises, Government agencies continually downplayed the seriousness of the problem and denied any serious risk to human health.

The inability of WA Government agencies to effectively regulate and monitor the operations and performance of multinational corporations whose rationale is profit maximization was confirmed in a recent WA Auditor General’s Report.

The Auditor General found that corporations were failing to meet their environmental and social obligations and Government agencies were unable to effectively regulate and enforce the social and environmental activities of private corporations.

A recent Corruption and Crime Commission Report identified that large government agencies  who oversee large contracts with corporations do not have the necessary skills controls and governance systems in place to manage these contractors and identified the risk of corruption.

It is patently clear that regulation and monitoring of corporations is largely ineffective and government agencies and statutory authorities responsible for monitoring them have not proved themselves up to the job.

Like many other places in WA, Esperance has become what US author Steve Lerner calls a “Sacrifice Zone”– communities forced to live with the harmful social and environmental impacts of poorly regulated mining and industrial activity. 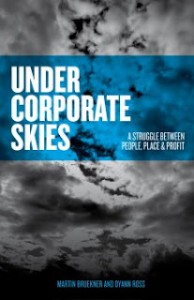 Martin Bruckner’s remarkable book Under Corporate Skies tells the shocking story of another Western Australian “Sacrifice Zone”- this time the struggle between the community of Wagerup and the multinational mining corporation Alcoa and its ally over three decades – the WA Government.

Brueckner tells a story consigned to the dustbin of Western Australian history. His book describes the the same pattern of denial, protection of mining and industrial interests, collusion by State Government agencies and dismissal and trivialization of community concerns that was evident in the Esperance scandal.

These “sacrifice zones” exist all over WA, in towns and communities where mining and industrial activity are dominant.  These are places and people sacrificed on the alter of corporate profit and economic growth.

The harms caused by poorly regulated mining and industrial activity – ill health and death, scarred land, polluted, air and water, despoiled environment and human landscape and a fraying social fabric – are trivialized, and denied, and when proven, they are simply dismissed as a cost of economic prosperity or considered not serious enough to warrant attention.