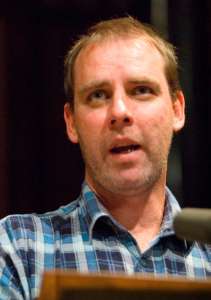 The Chair of the Prime Ministerial Indigenous Advisory Council, Warren Mundine in recent weeks came out swinging against environmentalist advocates who he said are anti-mining and who are denying First Nations people their due benefits from the resources underneath the earth they walk on. Mr Mundine’s opinion pieces were recently published in the Fairfax and Murdoch press ensuring extensive social reach.

The headlines to Mr Mundine’s opinion pieces were ‘Without mining we’d all be living in caves’ and ‘Green groups keep Aboriginal people in poverty.’

Dr Green has taken issue with Mr Mundine’s sweeping comments. Mr Mundine challenged green groups ‘to name one place in Australia where they would support a new mine’. Mr Mundine wrote, that he is ‘still waiting for an answer’. Dr Green said that if Mr Mundine had asked him he would have responded.

“I can name six States and two Territories where I would support a new mine. Had Mundine actually put the question to environmentalists, rather than issuing an asinine ‘challenge’ via the mainstream media, the response would be that environmentalists support mining except in circumstances where it involves an obnoxious product such as uranium or where there are strong environmental or social reasons to oppose a particular mine.”

“But he isn’t going to let facts get in the way of his story.”

Mr Mundine wrote that environmentalists slide past the fact that without mining we would not have the material benefits and technology that we do.

“Mundine’s role as a lobbyist for all things nuclear has been particularly offensive,” said Dr Green.

“In June, Muckaty Traditional Owners in the NT won a famous victory, defeating the efforts of the Howard-Rudd-Gillard-Abbott Governments to impose a nuclear waste dump on their land. The racism could hardly have been cruder, with bipartisan support for legislation overriding the Aboriginal Heritage Act, undermining the Aboriginal Land Rights Act, and allowing the imposition of a nuclear dump with no Aboriginal consultation or consent.”

Mr Mundine has said that Australia has “a legal framework to negotiate equitably with the Traditional Owners on whose land many uranium deposits are found.” Dr Green said this is not true.

“Only in the Northern Territory do Traditional Owners have any right of veto over mining. And even then, sub-section 40(6) of the Commonwealth’s Aboriginal Land Rights Act specifically exempts the Ranger uranium mine in the Northern Territory from the Act and thus removed the right of veto that Mirarr Traditional Owners would otherwise have enjoyed,” said Dr Green.

“In 2012, the NSW Government passed legislation which excludes uranium from provisions of the NSW Aboriginal Land Rights Act 1983. There is nothing equitable about that.”

“And another example ignored by Mundine, in 2011, the South Australian Parliament passed amendments to the Roxby Down Indenture Act 1982, legislation governing the Olympic Dam copper and uranium mine. The amendments retain exemptions from the South Australian Heritage Act. Traditional Owners were not consulted. Nothing equitable about that.”

Dr Green said that Mr Mundine’s role is no more than “to provide political cover for Abbott.”

Dr Green said that Mr Mundine “knows no bounds” in defending Mr Abbott even when Mr Abbott makes comments such as that Australia was “scarcely settled”.

“It would seem at the present time that the former National President of the Australian Labor Party, Mr Warren Mundine, has momentarily eclipsed the Cape York crusader, Noel Pearson as the Aboriginal man of the moment. Whilst Mr Mundine may lack the intellectual firepower of Noel Pearson, he has nevertheless elbowed his way to the front of the pack with his dazzling late-life conversion to the cause of all things Tony Abbott,” said Dr Foley.

Dr Green describes Mr Mundine as “an opportunist” who in effect is providing “cover for a racist Government.”

“That tactic is tried and tested, only the names change.”

Mr Mundine has said to me that he works in the best interests of his people and “that I am out there doing things for them” and “that this has been my life’s work” but it is fair to say a significant number of people do not believe him.