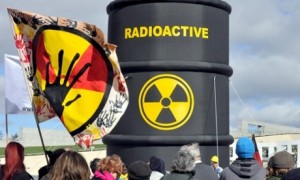 Muckaty Station is a small township in the remote Northern Territory, 110km north of Tennant Creek and roughly 800km south of Darwin.  Also known as Marlwanpa, the land is held under Native Title having formally been returned in 2001 to the traditional owners – the Milwayi, Ngapa, Ngarrka, Wirntiku, Kurrakurraja, Walanypirri and Yapayapa peoples.  Muckaty is also the proposed site of Australia’s first national nuclear waste dump or, as it’s officially called, radioactive waste repository.

Australian governments have been trying to settle on a nuclear waste site since the mid eighties, but have met fierce community opposition at every turn.  Muckaty is the sixth proposed site since the search began.  In 2007, the location of the site was nominated by the Northern Land Council (NLC) on behalf of several members of the Ngapa clan.  While the proposed site falls under the title of a number of aboriginal families, it was nominated without their prior knowledge or approval and the majority were outraged at the action.  Even within the Ngapa clan itself there was no consensus, and many objected to the waste facility being built on their land.

Despite the absence of consultation with the broader community, in 2007 the Howard government approved the Muckaty dump site with plans to open the facility in 2011.  After the secretive deal was negotiated with the NLC, so secretive that some members of the Ngapa clan were not even given a copy, a bitter conflict erupted.  Other clans, environmental groups, unions and the NT Government expressed outrage at the lack of proper consultation with the traditional owners.  Despite ongoing attempts to contact the government, opposing community groups had their meeting requests ignored, correspondence unanswered and were continually ignored.

In 2010, the subsequent Rudd government introduced legislation giving them the ability to override the Northern Territory’s threat to block the construction of the Muckaty dump.  After years of opposition, the Gillard government passed the legislation in 2012. The National Radioactive Waste Management Bill removed community appeal rights, indigenous & environmental protections, and gave the government the ability to override state or territory concerns about environmental impacts.  After her election in 2013, Northern Territory Senator Nova Perris expressed her objection to the Muckaty site, stating it would cause “profound grief, suffering and loss on Aboriginal people.” 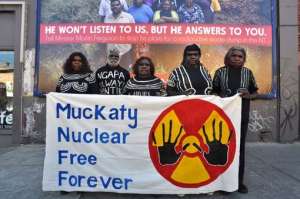 So where does Australia’s nuclear waste come from?  Currently it comes from scientific, industrial and medical research which has been accumulating in small storage areas across Australia.  The roughly 4000 cubic metres would be transported to the facility by road and rail.  There have also been calls to make the facility a commercial operation, housing nuclear waste from other countries which would likely arrive by sea.

Radioactive waste is a serious and growing problem in the international community.  While Australia does not generate commercial nuclear power, we have around 33% of the world’s known reserves and export uranium to over 20 countries.   As such, it can be argued that we have an ethical obligation to assist with the management of the hazardous waste our uranium creates.

But while there are still disagreements on the best way to deal with nuclear waste, there is consensus that the process must involve a high level of community consultation.  According to a UK report by an expert committee on nuclear waste, “There is a growing recognition that it is not ethically acceptable for a society to impose a radioactive waste facility on an unwilling community.”   It is clear at Muckaty that the Australian government did not engage in meaningful consultation with the community as a whole.  More deplorable than this is the willingness of successive governments to dump this problem on marginalised indigenous communities.  This is in direct conflict with our international obligations under the UN Declaration on the Rights of Indigenous Peoples which requires that no disposal takes place on indigenous lands without without “their free, prior and informed consent.”

So what’s next for the people of Muckaty?  After being postponed, the legal battle against the Commonwealth Government and Northern Land Council is expected to commence in the Federal Court in June 2014.  The legal team will include prominent human rights lawyers Julian Burnside and George Newhouse, who will challenge the nomination of the indigenous land for the nuclear dump site.  The case will be an important litmus test for any similar legal challenges in the future.  It is crucial that the government looks toward the responsible and transparent management of radioactive waste and away from the secretive tactics that have defined the past decade.