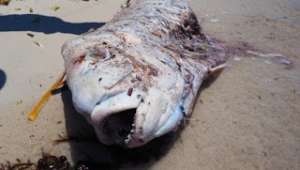 An environmental crisis is unfolding in Perth’s Cockburn Sound and no one seems to know the cause.

A massive fish kill, or localized die off of fish populations is occurring.

Over recent weeks, more than 2000 fish, mainly pink snapper and blowfish, as well as marine life up the food chain, including pelicans, seabirds and fairy penguins have been found dead in Cockburn Sound and along its beaches. (Although the Department of Fisheries disputed that penguins were dying as result of the kill and said that a dead penguin found had died of starvation).
There are also reports that people swimming in Cockburn Sound have had adverse reactions, including skin irritations and rashes and that the water was stinging. 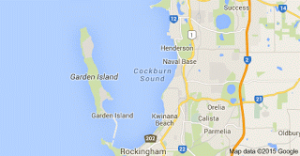 Cockburn Sound is an open ocean inlet off the Perth coast that lies between Garden Island, Carnac Island and the Perth coastline and stretches from the mouth of the Swan River at Fremantle, south to Cockburn, Kwinana and Rockingham. The Sound is a vital and fragile marine environment used for commercial and recreational fishing and is the breeding ground for pink snapper.
Cockburn Sound is WA’s major industrial zone for heavy industry, petroleum and chemical industries and Garden Island is a major naval base. The Sound contains numerous popular beaches.
Cockburn Sound has been under severe pressure for some time. There has long been concern about environmental and water quality and the health of Cockburn Sound, due to the presence of heavy industry along the Kwinana Industrial Strip and the naval base at Garden Island. Large beachside residential developments along the coast have added to pressure on the Sound.
A 2014 Report on the State of Cockburn Sound found it was under severe environmental pressure, including ongoing concerns about the health of seagrass; signs of declining water quality, particularly in southern sections showing signs of nutrient enrichment and problems with dissolved oxygen concentration and poor water circulation; very poor water quality in some smaller areas and seafood was generally unsafe for consumption. 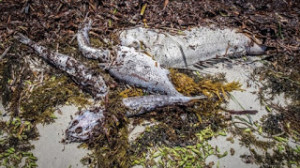 The WA Department of Fisheries has been unable to pinpoint the cause of the deaths and claims that microscopic examination of gill samples have shown the fish may have suffered respiratory stress, probably due to water quality. The Department said that respiratory stress can be caused by physical irritants or chemical contaminants.

Fish kills like this are the first visible sign of environmental stress. Many fish species have a low tolerance for variations in environmental conditions and mass deaths are often an indicator of problems in the environment that may affect other animals and plants and may have a direct impact on other uses of the water.

Reduced oxygen in the water is the most common cause of kills and this may be due to factors such as sustained increases in water temperature, drought, algal bloom, overpopulation, infectious disease and parasites  Toxicity is a real, but less common cause of fish kill.

The Department claims it has been testing for algal toxins, hydrocarbons, ammonia and pesticides. But the exact cause of the problem is still unknown. A Departmental spokesperson said:
“Test results received to date indicate no evidence of either natural algal or industrial toxin involvement and point towards an as yet unknown natural event as the cause of this incident.”
In the WA Parliament, Minister Helen Morton said that a canola grain spill at the CBH Kwinana Grain Jetty  between November 18-22 may have resulted in some grain entering into the Sound. The Department of Environment Regulation is investigating the spill from the Kwinana grain jetty, as it matches the timeframe for the reports of dead fish.
But a Fisheries spokesman said the examination of the dead fish stomach contents found no evidence of canola or any other unnatural food source.
The Barnett Government and the Fisheries Minister have come under severe criticism for their haphazard and shambolic handing of the crisis and their failure to act with a sense of urgency.

Recreational fishers are so outraged about the Government’s response they crowd sourced and initiated their own investigation. In addition to an organised protest, they are urging fishers to take their boats out into Cockburn Sound to locate dead fish to understand more about the problem.

The ALP Opposition points to the abolition of the Cockburn Sound Management Authority, which existed to monitor water quality, as a contributing factor.

Many of the fish kills are in area known as Mangles Bay, which is the site for  a proposed Mangles Bay Inland Marina and private canal estate, a development opposed by many groups.
Green groups, environmental groups and local citizens oppose the development and a major development at Point Peron which they argue threaten the health of Cockburn Sound. They argue the Barnett Government’s plans for major beachside marina, private canal estates and residential developments along pristine parts of the Sound are putting more pressure on an already fragile ecosystem.
Greens MP and spokeswoman Lynn MacLaren said fish kills in Cockburn Sound were further proof the Barnett Government should rethink proceeding with the Mangles Bay Inland Marina:
“The latest kills were near the Garden Island Causeway and Point Peron boat ramp, which is adjacent to Mangles Bay. Mangles Bay is known to be a thriving fish nursery of state importance and it also has the healthiest seagrass beds in the Sound. It is irrational to destroy the one area in the Sound that is in really good health while we are still struggling to manage overall water quality and health.”
Categories : Environment