Thirty Elders from across northern and central Australia are calling on Government to recognise cultural and regional identities, differences, and norms if the rising rates of youth suicide are to be stopped. The Elders said that Governments need to redirect funds from the litany of failed non-Aboriginal run policies to cultural and regional run programs – managed only by First Peoples. 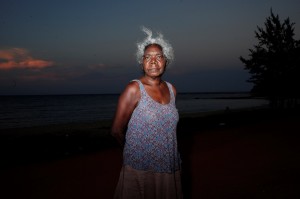 Today, the Culture is Life organisation launched the Elders Report into Preventing Indigenous Self-harm and Youth Suicide. This morning, I myself, as a researcher on premature and unnatural deaths and suicide, who has been using the complement of my journalism to advocate for an end to the suicide crises plaguing this nation, presented the report to Federal Minister for Indigenous Affairs, Nigel Scullion. We met to discuss some of my own recommendations on the ways forward however in addition I presented the Minister with the very timely Elders Report.

This new report has extensively canvassed Elders, many of whom I have also engaged with, who are at the coalface of the crises. The northern and central Australian Elders were candid about the tragic loss of life in their communities – which includes the Kimberley, Cape York, North East Arnhem, the Central Desert, Maningrida, Darwin and the Tiwi Islands.

“The Government programs work from a top down approach, and they are failing our people. We need our people to be allowed to work with our people from a cultural integrity approach,” said Mr Cole.

Mr Cole said the Northern Territory Intervention which has seen people moved off their Country into dustbowl townships has contributed to the disastrous rise in suicides. Mr Cole said “the most at-risk age category of First Peoples in the Territory are the males between 10 to 24 years of age. These children and young adults comprise 80 per cent of all suicides of our peoples.”

Mr Cole said that Government programs and services managed by non-Aboriginal people are “wasted”. He said that despite the high rates of suicide and self-harm, that First Peoples are refusing to access these services because of “trust issues” and “cultural differences”.

“These mainstream services are also poor services which do not understand our people. The Government is resourcing this waste while overlooking the community healing programs. An industry has been created on the back of our suffering, achieving very little while our young people die.”

In the Kimberley’s Derby, which it and nearby communities such as Balgo and Mowanjum have endured a spate of youth suicides in recent years, Bardi Elder, Lorna Hudson said, “Our youth see no future, no hope, they are lost in the confusions of two worlds, there is no balance in education or in the school curriculum of both our worlds, there is no respect by the mainstream of our cultural norms and rights.”

“We need the balance, where we get it right in terms of our languages, of our own education too, of who we are and of our right to our identity and to the hopes everyone should be entitled to, to be supported and resourced by Governments.”

“The confusion of two worlds where one does not respect the other, and consequently the loss of all hope, are driving our young people to self-harm and suicide in alarming numbers,” said Ms Hudson.

Culture of Life coordinator, Peter McConchie said that the despite the “good intentions of Government programs” that they “have failed” to stem the alarming rise in suicides and self-harm.

“The report came about because till this point there has not been a report done where we are hearing the voices of the Elders.”

“What the Elders in the report are calling for is for Government to support the community-led healing initiatives. We are not asking for more funding only for a redirection of funding. We need to take people back on to Country, so we can work with identity, and so people know who they are. If we allow the suffering to continue, we all suffer,” said Mr McConchie.

The majority of the Elders agreed that the loss of cultural identity and cross-cultural confusion were majorly prevalent as underlying causes to the suicide crises.

Maningrida Elder, Andrew Dowadi said, “The Government should know we are now facing life and death here in the community.”

“We end up with ideas on suicide prevention that come from Canberra and bear no resemblance to what is needed in the community and on the ground,” said Kimberley Lore and Cultural Centre CEO, Dean Gooda.

“The only way to find out what’s going on with at-risk young people and to tell if they’re really hurting is to take them fishing or hunting; to sit down with them on Country. Sitting in your office is no help,” said Cape York Elder, Des Bowen.

“Suicide occurs when young people find themselves in no man’s land. If our young people today join their Aboriginal culture with the western style, they will be okay,” said Tiwi Islands Elder, Bernard Tipiloura.

The report contains interviews with the 30 Elders documenting their solutions. The report also includes a foreword by Social Justice Commissioner Mick Gooda and an introduction by Australia’s first Indigenous psychologist, Professor Pat Dudgeon.

The healing starts with community led grassroots programs that take young people back to their culture, back to their roots, back to country. The report profiles healing initiatives that are successfully preventing suicide in a culturally appropriate way, tailored to individual communities.

The Elders’ Report is an initiative of Culture is Life’s ‘Be Part of the Healing.org’ campaign to end youth suicide. To find out and sign a petition, go to BePartOfTheHealing.Org

To read the Report go here:

The Stringer audio interviews links below:

Central Desert Elder David Cole, “It must be our people”