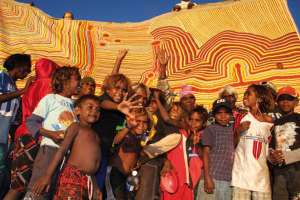 Western desert-living Martu Elder, Thelma Rawlins said that many of her people remain opposed to the “go-aheads” given to uranium mining on Martu Country.

“Kintyre should be left alone, our Country left alone.”

“Country will be made bad, our water made bad. Our water is salty, the river bed is salty. We have to be careful with our water. The uranium out of ground will take our water away.”

“Leave the uranium in the ground. It is bad stuff that they want our people to be next to, this is not good.”

But Western Australia’s controversial Environmental Protection Authority (EPA) has given the thumbs up for the CAMECO company proposal to mine uranium on Martu Country, at Kintyre which is next to the significant waterways of Kalmilyi National Park in the Pilbara. The EPA has been the subject of one controversy after another and most recently with the now defunct James Price Gas Hub proposal in the Kimberley where it had also have given the thumbs up despite widespread public opposition.

Two prospective uranium mine sites in Western Australia are nearing the likelihood of becoming operational in the next couple of years, both near Aboriginal communities – the other uranium site is near Wiluna and Toro Energy may have it operational by the end of next year. By the end of the century Western Australia will be transformed into one of the world’s largest uranium miners according to insiders in the industry. Western Australia is rich in easily accessible high grade uranium. The miners are chomping at the bit, investing in uranium mining research divisions within their multinational companies. It is no secret that the State and Federal Governments are supportive of mining uranium despite the litany of well-known risks.

The Conservation Council of WA has slammed the EPA approval.

“The proposal to mine uranium five hundred metres from a creek system that is part of a network of significant waterways in a national park is reckless and should not be approved,” said CCWA spokesperson, Mia Pepper.

Ms Pepper said the approval disturbingly followed the recent allegations by Martu man, Darren Farmer “that a former mine owner Rio Tinto made secret payments of around $21 million to silence Aboriginal concerns and opposition while it negotiated the project’s sale to current owner CAMECO.”

Former Western Desert Puntukurnuparna Aboriginal Corporation CEO, Bruce Hill has joined the chorus for independent inquiries into how decisions and dealings are made in native title dealings in the Western Desert. A few years ago, Mr Hill blew the whistle on a litany of alleged rorting and what most would have considered illegal activities within his organisation to the Office of the Registrar of Indigenous Corporations and to the Australian Senate but eventually the inquiries petered to a standstill.

Ms Pepper said the EPA approval puts at risk human life and also “our largest national park – and would impact on scarce water resources and a number of significant and vulnerable species including the bilby, marsupial mole and rock wallaby.”

“Uranium is currently trading at US$28 per lb. CAMECO has stated it will not mine unless the uranium prices reach upwards of $US75 per lb. The EPA is green lighting yellowcake when the company has stated the finances and the plan don’t stack up.”

But mining company insiders say Mr Sweeney’s arguments are naïve and that uranium prices will spiral upwards, and that for the mining companies it is all “about the expected return, which will be tenfold and then many times more before too many more sleeps.”

There are more than 70 nuclear reactors under construction around the world with more than 300 in the planning stages. There will be a couple thousand more by the end of the century.

Toro Energy managing director, Vanessa Guthrie said that there will be a swell of demand for uranium and that “the price will change – it is just a question of when.”

According to the EPA, CAMECO’s uranium mine plan at Kintyre has gone through rigid environmental impact assessments.

Ms Pepper said that it is “really disappointing to see that most of the conditions by the EPA are administrative and that the ones that do relate to environmental protection are somewhat deferred to the Department of Mines and Petroleum.”

“We will absolutely be putting in a submission and we will be supporting efforts by other people to put in appeals.”

“There is too much at stake with this project and we will challenge this mine at every step of the way.”

“Like the Wiluna project (which has also received EPA approval), the Kintyre project still has a long way to go.”

CAMECO Australia managing director, Brian Reilly said uranium will be mined once the market conditions signal for this. CAMECO produces about 15 per cent of the world’s usable uranium from mines in the United States, Canada and Kazakhstan.

Western Australian Mines Minister, Bill Marmion, who has the final say on the uranium approvals, said that the public opposition to uranium mining has decreased.

Minister Marmion said protesting about uranium mining has “dropped off” the list for activists.

“Three years ago when I was the Minister for the Environment, I think I had ten protestors on uranium outside my office on a Saturday, and I think the same ten were at Wiluna.”

“So I think they are just a rent-a-crowd, and I think they’ve run out of money, those ten people.”

Minister Marmion pointed to the State’s agenda saying that since the State ban on uranium had been lifted in 2008, more than $280 million had been spent on exploration.

Despite Minister Marmion’s claims of a small rent-a-crowd, many Martu have said to me that they oppose the uranium mining. Many Wiluna residents, including senior Elder Geoff Cooke also oppose the proposed uranium mining.

“We are the Custodians of the Land. It must come before all else,” said Mr Cooke.

“Uranium mining can hurt us forever, hurt every generation of our children to come.”

Once Toro Energy’s project is operational, there will be two open-cut mines nearby Wiluna at Centipede and Lake Way, producing an estimate of 800 tonnes of uranium oxide a year – for at least 14 years.

The EPA confirmed that the Kintyre will have at least a mine life of 13.5 years.

A few years ago, I wrote about the extensiveness of uranium mining plans that one anti-uranium mining activist criticised at the time as not possible. She believed that the war against uranium mining in Western Australia had been won.

A well-placed insider in a major mining multinational had said, “For a long time the writing has been on the wall. Uranium mining will occur and it will be widespread. The nuclear age will come to Western Australia. The WA of 2030 will be different to the one of 2013.”

The insider said there will be a proliferation of uranium mine sites in Western Australia and nuclear reactors.

“People may get sick at uranium mines and in transporting uranium and in other future plants and sites that will depend on that uranium but that’s par for the course. No-one will be forced to work in them. People do know the risks. Governments know the risks. The resource sector knows the risks but I am telling you this is what will happen and it has been in the advanced planning stages for quite some time.”

Once the Kintyre and Wiluna mines are operational, every month three trucks will carry concentrated powdered ore sealed in drums and with a United Nations inventory numbers. The trucks will rumble thousands of kilometres to Port Adelaide.

Ms Guthrie has been reported in saying, “It is very safe.”

“The plastic-lined drums are sealed and locked in pallets and we monitor the (radiation) exposure to the drivers who would be closest to the product.”

Ms Guthrie said the occupational limit in reference to radiation exposure is 20 millisieverts and she said driver’s exposure “would be less than one millisievert a year.”

But First Nations anti-uranium campaigner, Kado Muir said that “uranium is radioactive and poses great risks to workers, communities and the environment.”

“Uranium oxide can be very dangerous if inhaled.”

“Breaking it down to radon gas is dangerous.”

“The biggest problem is that its impacts are long-term whether from leaks or mine waste. It can get into groundwater and into the food chain. Then what will we do?”

“Every uranium mine so far in Australia has a history of spills and leaks.”

“For our people nearby uranium mines, such as on Arabunna Country, or at Jabiluka in Kakadu, if radiation fallout impacts the environment then animals and food chains will be affected and so too our towns.”

“Uranium is the asbestos of the 21st century.”