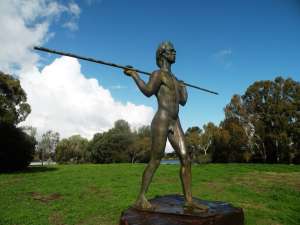 Statue of Yagan on Heirisson Island

The Western Australian Government is tossing every cheap token to push through its $1.3 billion in-kind native title offer to the Noongar peoples as the proposal approaches the ‘vote’. Premier Colin Barnett has followed his proposed parliamentary ‘recognition’ of Noongars as the Traditional Custodians of Perth and the south west with the proposed naming of a prominent Perth city square after Noongar resistance warrior Yagan.

But the announcement, on Western Australia Day, which claims to be the founding day of the State, dismissing tens of thousands of years of residence by Noongars, has been met with a mixed response. Several years only into the Perth colony, Yagan was murdered by a British colonial settler – in 1833. It was alleged, but never proven, that Yagan had killed two colonialists who he could have only seen as invaders – who were dispossessing Noongar peoples of their lands.

Nyungah Land and Culture worker, Iva Hayward-Jackson said that the naming of the square which includes the new Perth city link development is insulting to Yagan and to his descendants.

“The announcement of a resistance warrior’s name for our former sacred wetlands and pristine environment smashed by the colonialists is inappropriate. Yagan would not want this, he defended our lands, he would not have wanted to see our sacred Dreaming areas desecrated and smashed,” said Mr Hayward-Jackson.

“Premier Barnett has a track record of smashing the environment, in destroying pristine lands and our environment.”

“Premier Barnett has relied on this sell of naming the square after Yagan, with the help of a few of our people who have turned their back on our heritage and sell the Government’s interests when called upon.”

Premier Barnett has said that he had consulted “over the last week” Noongar leaders. The South West Aboriginal Land and Sea Council (SWALSC) believes the naming of Yagan Square is an “important symbolic step”. The SWALSC are the chief negotiators and brokers of the State Government’s native title offer.  SWALSC CEO, Glen Kelly said that Yagan “is iconic for Noongars.”

“He defended what was his.”

“(Yagan) was also seen as noble by the settlers. There were Whites who described his death as treacherous.” Indeed there was some commentary in the then Perth Gazette that he should not have been killed in the manner he had been – and without natural justice.

Mr Hayward-Jackson said, “There was a state of war when the colonialists came. The colonialists brought their dirty tactics to our lands; of rape, pillage and plunder. It was the metal guns against wooden spears. Yagan was a stalwart of resistance, so were many others.”

“Yagan was protecting our Spiritual Dreaming.”

“The real history of our people’s suffering and of our resistance should be taught in every school that is on our lands.”

The true story of how Yagan may have died may never be known, most accounts are limited to folklore and to what has been suggested by the Perth Gazette at the time. It has been said that after trying to broker peaceful living between the colonialists and his people that Yagan responded to the vicious dispossession of his people as its brutality was relentless. It is said that he speared to death in two separate attacks two colonialists. It is believed that he was shot in the back by an 18 year old colonialist, William Keats, because Keats claimed ‘the kill’.

Yagan was believed to have been born around 1795 and was murdered July 11, 1833. He had lived near the Swan River and had seen the ‘tall ships’ arriving. After the deaths of the two colonialists and the presumption that it was Yagan who had killed them, a bounty was offered by the colony’s fledgling Government – for his capture, dead or alive. Upon his death, his head was removed and smoked, and like other removed heads as was the way at the time it was staked on a post and publicly displayed to spread fear into would-be resistance fighters. Soon after this, his head was stored by a Government official and surprisingly taken to London for its “anthropological curiosity” where it remained in a museum till 1964. It was then buried with the remains of others, mostly babies, in an unmarked Liverpool grave.

During the 1990s high profile Noongars led repatriation calls for Yagan’s head, and in 1997 his head was brought back to Perth. Within a Traditional Noongar ceremony, Yagan’s head was buried in 2010.