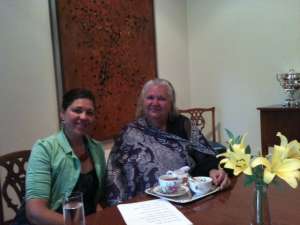 This is my mother and I when she was giving a welcome to country at the lodge.
Inside the PM dining room (Julia was PM at time).

“My mother was a Ngunnawal Woman whose parents were both of Ngunnawal decent – of the Brungle and Cowra regions. My mother was removed from her homelands late 1940s. My father’s dad was Cuban and his mum a French immigrant.”

“I was born in 1974. I grew up on NSW’s Central Coast – Woy-Woy or the Indigenous nation of Kar-ring-gai. This nation was rich in its history of Aboriginal Occupation and I remember the first time I saw shell fish sedimentation, a timeline of Aboriginal existence. The wall of shell fish layers revealing previous generations Aboriginal occupation. It was like I transcended back to those days (pre-colonial) of ‘having a feed and looking at through yesterday’s eyes’. I also knew that my culture was something deeper, holistic and spiritual.”

“For the first two years, the NT was belittling experience. I was a southern Aboriginal girl whose only induction into my culture was visits to Brungle. I had completed two years of high school and was about to enter year 9 when we left for Darwin.”

“Darwin was mind blowing after I got over leaving everything I knew. It took a few years but in that time mum had established deep friendships with a woman who was of the Jawoyn Community – Elsie River station mob (Katherine). I remember the first time I went for a visit. This was incredible and was completely different from the Government run community mission I was used to in NSW. First day we arrived, the kids grabbed me and said we are going swimming. Still feeling the heat this was a blessing to hear. We set out to walk to the water-hole and when we got there it was breath taking. We swam in our own thermal pool with natural spring water.”

“The kids then decided that we were going to hunt for dinner that night – hunt is an interesting word seeing all they had to do was walk around the reeds and pick out the biggest fish I had seen – a barramundi.  As we were leaving one of the kids tapped me on the shoulder and pointed down at the water again. Smiling back at me from under the water was a crocodile.”

“My time in the NT is a time that is personal, confrontational, fundamental and at times a stumbling block. I could never experience such a time and events again or people still living and breathing their culture without Government interruption or Intervention.”

Delephene attended the University of Canberra. Delephene’s mum came home to her people’s nation and worked in Canberra, as a diplomatic Elder in residence for Prime Ministers Kevin Rudd and Julia Gillard. “My mother who is well educated and well spoken took on her role as a senior Ngunnawal Elder. I have been blessed to follow the rock star (mum) to such diplomatic welcomes as the President of the United States, President Barack Obama. I also met her majesty, Queen Elizabeth, and developed a friendship with Bob Katter.”

“I now work and live in my nation of Canberra. I started writing for reasons of Aboriginal representations – as a whole these representations have declined within mainstream institutions  – particularly workplaces and tertiary settings. I wanted an educated Aboriginal voice to put across an Aboriginal perspective and point of view.”