Delegation will lead sit-in on Canberra – The Freedom Summit 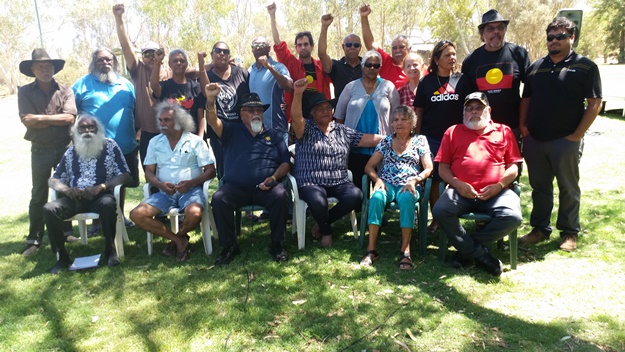 They gathered at the Old Bungalow at Mparntwe (Alice Springs) from across the continent and for two days in the centre of this continent, those at the Freedom Summit spoke of the continuing tragedies and attacks against their people and of the ways forward. A delegation of 20 was endorsed by the Freedom Summit to mobilise around it the First Peoples of this continent to stand up united and reclaim the “Aboriginal Rights Struggle”. In the meantime, the Federal Government has responded to the Summit’s organisers with the offer of a meeting. But on January 26, the delegation will converge on Canberra – and begin a sit-in right outside Parliament. Thousands will join them, and in so doing, so will the world’s press.

The original people of this continent have had the trust in expectations born of the courageous rights struggles of the 1960s and 1970s betrayed. In the world’s 12th largest economy and 2nd wealthiest nation per capita, the original peoples are imprisoned at among the world’s highest rates, their children suiciding in unprecedented numbers, record numbers of people are living homeless or in shanty towns.

Narrunga Elder Tauto Sansbury said, “We came here because all our expectations have been betrayed. We cannot sit idly by and watch our children die. Whose family has not been touched by suicide and by the hopelessness that far too many of our people endure? I wake up at nights depressed at the plight of my people, at the plight of our people right across this continent.”

“We have come to Alice Springs, we have met and we have poured out our hurt and of our fears for the future. We will stand united and resist the closing of our homelands, of our communities. It is time for us to stop the abominable taking of our children, the unfair extreme poverty of our people, the deplorable harassment and jailing of our people, the inequalities that our peoples are thumped into. We say not only ‘Stop It’ but we ourselves will ‘Stop It.’”

“We have endorsed a delegation of 20 from the Freedom Summit to represent us. We will continue the reach into communities right throughout this continent to further build and unite our numbers so by the time we reach Canberra we will be there in our thousands. Then we will change the heart and soul of this nation which stands today on the lands which belong to us, which are our lands, in which we have been hurt and in which we are torturously punished,” said Mr Sansbury.

“We know the ways forward, and we shall live them.”

Redfern Aboriginal Tent Embassy’s lifelong rights campaigner, Jenny Munro said, “We will not be kowtowing to any system that only seeks to control our people.”

Ngarla Kunoth-Monks said, “We need to come together and operate together. It has to work for all of us.”

Les Coe said, “In the 1970s we came in thousands and we brought on changes, in thousands we must come again.”

Roxley Foley said, “It was said in the 1970s that the Whitlam Government brought on great changes, what in fact was the case, was that we, us, our people were the ones who brought those changes on. We stood as thousands. We made it all happen, the health services, the legal services, housing services, all of it. Only we can make it all happen.”

Maurie Japarta Ryan said, “We need certainty, and only we can deliver it for our people. My grandfather, Vincent Lingiari, thought what he had achieved would be in perpetuity. Whitlam cradled the soil of our earth into my grandfather’s hand but the Northern Territory Labor Government took it back.”

Sandy Davies said, “We need to unite against the control and punishment of our people. We will not endure the vicious assimilation of our people. Our people in the remote communities will not have their world shut down on them.”

“Our people are suiciding and a pin drops but a flag gets burned and it is national news.”

“The message I bring from the remote, from the homelands, is these are our lands and we will not move.”

Marcus Woolombi Waters, “It is our obligation to lead the way.”

During the evening following the first day of the Summit, Mr Sansbury was contacted by the Minister for Indigenous Affairs, Senator Nigel Scullion, who offered to meet. For the most part, the domestic media had skipped substantial coverage on the convergence to Mparntwe. But by the end of the first day there significant media coverage had been generated. The media had no choice but to realise what was brewing. And so should everyone, because indeed thousands will converge on Canberra, January 26, to stand solid with the delegation and the ‘sit-in’ right at the front of the parliament of this country that is responsible for the deplorable and cruel state that the majority of the original peoples of this country are forced to live in.

Statement from the Delegation:

“We gathered at The Freedom Summit to respond to the extreme assaults from all levels of government hitting our communities.”

“Historic and growing rates of incarceration, continuing stolen generations, a suicide epidemic. Governments have shamefully announced intentions to close down communities in Western Australia and South Australia. Oombulgurri has already been bulldozed – an open genocidal process. This on top of the continuing apartheid and land clearances of the NT Intervention. Organisations across the continent are having funding slashed. Heritage laws are being attacked. A new land grab is brewing, with attacks on Land Rights across the country.”

“There is no representation of our people at the national level. The Indigenous Advisory Council is a handpicked farce and must resign.”

“At this Summit, grassroots leaders from across the country have gathered to say enough is enough. To our people suffering we say – there is hope.”

“We have nominated a steering committee to take the struggle forward. We are planning a future Summit to discuss the vision of true national representation with bigger numbers and to strategise ways forward.”

“The fight for our rights will rise from the ashes. We are planning to lead mass action on the streets to defend our rights and enforce our vision of self-determination.”

“We, the Original Sovereign Peoples and Heads of this Nation being assembled at the Old Bungalow, Mparntwe (Alice Springs) declare the Independence of our Peoples, which is hereby constituted and declared to be an independent Sovereign Nation under the designation of the United Tribes of our Lands.”

“All sovereign power and authority within Territories of the United Tribes of our Lands are hereby declared to reside entirely and exclusively in the hereditary Elders and in Heads of the Tribes. In their collective capacity they declare that they will not permit any legislative authority separate from themselves to exist, nor any function of Government to be exercised within the said Territories, unless by persons appointed by them, and acting under the authority of Lore regularly enacted by them as assembled.”

What the domestic missed – The Freedom Summit

The Freedom Summit – “it is our obligation”