Death in Custody rally – “some meaningful changes can occur overnight” 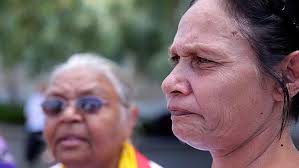 Last year, on August 4, a 22 year old Yamatji woman who had committed no crime, died needlessly but also in the worst of circumstances in a police lockup in regional Western Australia. Ms Dhu died 48 hours after her detainment on unpaid fines. South Hedland Police had been called to an alleged disorderly and instead of helping Ms Dhu into crisis care arrested her and her boyfriend.

A background check found Ms Dhu had $1000 worth of unpaid fines. Western Australia’s draconian laws took effect and the police officers arrested the physically unwell and shocked Ms Dhu. Much has been written about the death of  this young woman but Kamilaroi academic, Dr Marcus Woolombi Waters summed it best, “Twenty-two year old Aboriginal woman Ms Dhu spent the last three days of her life vomiting up blood in agonising pain in a police cell, and was taken to hospital two times only to be released back into police custody as she lay dying.” The third time police took her to the Health Campus, 48 hours after her arrest on lousy fines, she would be pronounced dead.

Ms Dhu’s family – led by her mother Della Roe, her grandmother Carol Roe and by her uncle Shaun Harris have relentlessly campaigned, throughout Western Australia and nationally for the last seven months. In October a huge crowd attended a rally in the name of Ms Dhu at the steps of State Parliament. Premier Colin Barnett stepped out of Parliament and to his credit confronted the family and the crowd. He made a personal commitment to Ms Dhu’s mother that her daughter’s coronial inquest would be sped up and he would personally ensure that it would be transparent. He made a commitment to the crowd that he would work closely with all his departments to reduce the State’s record prison population – adult and juvenile – Black and White.

Premier Barnett is yet to live up to any of these promises.

“The Premier promised that he will get answers for my beautiful daughter’s death. He promised that there would be an inquest. But today I stand here with no answers, no inquest, no anything. To this day I am still without a death certificate. All I have is a plot number where my daughter is buried. I do not have a death certificate stating the cause of her death. My beautiful daughter is gone,” said Ms Della Roe.

“Our people suffer in so many ways, and it is so bad in this State in particular, our people just know pain and suffering, but the Government has a chance to help here and it has not done anything yet.”

The rally was convened by the Deaths in Custody Watch Committee WA. The Committee’s chairperson, Marc Newhouse presented members of parliament who were present –from the Greens and Labor camps – a petition of 65,000 signatures, urging the Government to make real change in the name of the late Ms Dhu.

“It has been many months and we are here again today calling on the Government to implement the recommendations we presented to them last year. Some of these changes can be implemented overnight, there is nothing to stop them from implementing many meaningful changes,” said Mr Newhouse.