Damien Little and Geoff Hunt were not ‘good blokes’. But who are the perpetrators we are NOT talking about? 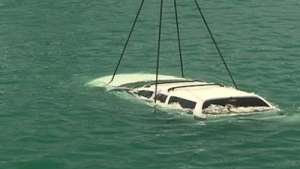 He’s not a good bloke. He’s a murderer.

Two days after Damien Little drove his car off a Port Lincoln wharf with his two children, we’re calling for some balance. You’re not a victim if you take out your two small children with you – you’re a criminal. The same goes for Geoff Hunt, who gunned down his entire family in Lockhart last year before killing himself.

A ‘good bloke’ would not have shot his eight year old daughter in the face as she sat up against the bedhead.

These are unquestionable truths. A murderer, by definition, is a person who commits murder. By annihilating your entire family, you become a criminal and a perpetrator of familicide and filicide.

The upholstery in Damien Little’s family car will still be damp, and we’re dissecting the details of the murder with enormous gusto. He was mentally ill, his mother speculates. This is part of a wider discussion about violent men, say the feminists. Google indicates that there are 25,700 results for the search on ‘Damien Little’ and ‘Koda’ (the Little’s eldest son).

Why, then, is there not equal coverage – and a cry for balance, a call for justice – given to the murders of children with disability at the hands of their parents? Who are we NOT talking about?

In 2011, a South Australian woman named Angela Puhle starved her 27 year old daughter, Kyla, to death. Kyla had cerebral palsy. The judge said that her 57 year old school principal mother had ‘suffered immensely’ – because she had lost her daughter, husband and job – and that she was a ‘devoted and loving mother’. The judge found her guilty, but refused to impose a custodial sentence or a fine. In South Australia, the punishment for ill treatment of an animal carries a maximum penalty of $50,000 or four years in prison.

In 2013, an inquest into the 2011 death of nine year old Isabella Leiper was suspended after the Coroner found that she was killed by a ‘known person’. Police have charged her father, David, of killing Isabella, who had cerebral palsy and who had died from a number of internal injuries that were the result of a blunt force to the stomach. During the inquest, the Coroner heard that Isabella’s father had previously assaulted a baby from another marriage, who suffered bleeding from the brain.

And late last year, a story broke that a mother and her partner were accused of killing their autistic eleven year old son by binding him to a garden chair, dousing him with cold water and leaving him in a garden shed, where he died from exposure. The boy was routinely tortured and confined to the shed, his mother said, who the Crown alleges is jointly responsible for his death. The boy died in 2011, but not a single news outlet covered the story at the time. It was only in November of last year that a limited discussion broke out in the disability sector after half a dozen – literally – news outlets picked up the article. Parents argued vehemently that the torture and killing of this child should be attributed to lack of support, and the words torture and murder were conspicuously absent from the news coverage.

Killing a disabled person is different from killing a non-disabled person, clearly. Just ask Peter Eitzen, drugged and stabbed by his mother Beverly in 2009. Or Daniela Dawes, who held her ten year old son’s nose and mouth shut until he stopped breathing. She walked out of the court into a paid media interview, and was placed on a five year behaviour bond.

News reports about disability filicide typically talk about how parents were ‘pushed to the breaking point’ or ‘under too much stress’, portraying disabled children as burdens and positioning disability as the problem. Victim blaming is not just directed at disabled children, either – in last year’s Coroner’s inquest, the Coroner spoke about the accident that caused Kim Hunt’s disability and cited her personality changes as contributory to the annihilation of the family. Kim was described as ‘hounding Geoff endlessly’, ‘complaining about feeling unsupported’, ‘suffering wild mood swings’, being ‘highly strung’ and ‘having trouble with angry outbursts’. Pages of the Coroner’s report are devoted to the state of mind of Kim, who was shot just above her right eye with a 12 gauge shotgun, rather than Geoff, who was described as being ‘well liked, charismatic, an excellent sportsman and farmer’ and being ‘sociable and hardworking’.

There are victims, and there are murderers. If you murder your family, you are, by definition, a murderer. And as a disabled victim, you are just as murdered, just as dead – and just as newsworthy.

The outpouring of grief for the two little boys who died in a submerged car two days ago is appropriate, as is the community’s need to dissect what happened in order to prevent it ever happening again. But there will be no viral news coverage, no community discussion, no flowers at the wharf for Kyla, for Peter, for Jason, for Isabella. No jail time for the perpetrators, who are quietly excused from court amongst those unspoken words; mercy killing, euthanasia. No teddy bears and balloons laid beside a garden shed in Central West New South Wales.

In ten years, it will be almost as though they never existed at all.