Cutting ‘red tape’ and the rise in workplace fatalities 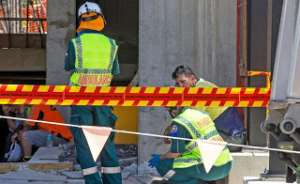 Last week here in Perth, three young men went to work but did not come home.

Benjamin White, Joe McDermott and Gerry Bradley all died at their place of work.

Joe McDermott and Gerry Bradley were crushed to death by a concrete panel that fell off the back of a truck at a building site run by Jaxon Constructions. Benjamin White was an Alcoa worker who fell off scaffolding at Alcoa’s Kwinana Refinery.

The causes of the deaths are not yet known.

Their deaths bought to five the number of workplace fatalities in the last two weeks in WA, including a mineworker killed when his truck rolled over at a mine site and a 28-year-old contact worker who died of yet unknown causes at the Northern Star Resources Paulsens Gold Mine in the Pilbara.

In 2014, 185 Australians were killed at work. The most five dangerous industries are 1) transport, post and warehousing 2) farming, forestry and fishing 3) construction 4) mining and 5) manufacturing.

So why is the number of workplace fatalities escalating?

Australia wide, the number of deaths in the mining industry has soared due to cost cutting, pressure to ramp up production, the high number of inexperienced staff due to redundancies and anxiety about job security, all of which impact on workplace safety.

Another factor contributing to the rising workplace death toll is the business inspired “war on red tape” waged by the Abbott/Turnbull and the Barnett Governments, which scraps laws and regulations to allow corporate and business non-compliance and self-regulation.

Reducing the burden of regulation and so-called ‘red tape’ is one of the Abbott/Turnbull Government’s top 5 priorities. The deregulation agenda aims to remove regulation and promote self-regulation by business as the best way to protect worker safety.

These pro-business campaigns aim to reduce and remove any constraints on corporate and business profit taking. As Malcolm Turnbull said in May 2015:

“One of the important things we should do is make sure we remove as many obstacles to enterprise and entrepreneurship as we can. That is one of the reasons the Abbott Government has been so assiduous in culling regulation and red tape”.

Here in WA, the Barnett Government’s Red Tape Reduction Program similarly aims to make it easier for business and corporations to make profits.

However, red tape reduction, combined with funding and staff cuts to regulatory agencies, has the effect of reducing the level of investigation and prosecution of safety regulation violations. Occupational health and enforceable safety regulations and rules and workers compensation are redefined as ‘red tape’ and cut through deregulation.

In the case of workplace safety, cuts to health and safety and removal of regulation and enforceable safety rules and regulations, threatens lives and increases the risk of workplace harm and fatalities.

Tougher enforceable workplace laws and penalties are needed for employers whose negligence results in death. The average fine for a workplace fatality is around $100,000. Company directors need to be made criminally liable and face prosecution and penalties such as jail and serious fines if workers die because of their negligence.