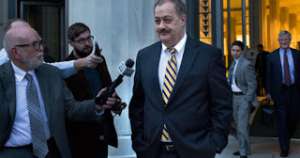 “Don Blankenship’s conviction doesn’t feel like victory but in the grand scope of more than a century of the coal industry’s abuse of the people of Appalachia, it may mark a starting place….My heart aches for all those who suffered and died under Blankenship’s avaricious lash. The jury showed him more mercy than he has ever shown anyone in his entire existence on this planet. Even if he serves his one year slap-on-the-wrist, we know already that justice will not be done. His legacy of poisoning Appalachia will persist long after his name has been forgotten.”
Bob Kincaid, president of the Coal River Mountain Watch.

Recently, I wrote a blog piece Holding corporate executives criminally responsible for the deaths and harms they cause crimes about the trial of Don Blankenship, the coal baron and CEO of  Massey Energy who was on trial for criminal charges over a coal mine explosion that killed 29 miners at the Massey Energy Upper Big Branch mine in 2010.
The Upper Big Branch explosion was the worst US mining disaster in nearly fifty years. Blankenship was on trial for violating numerous safety regulations and conspiring to hide violations which ultimately led to the underground mine explosion and the disaster.

Blankenship was a poster boy for ‘crony malevolent capitalism’ and ran Massey Energy as a lawless enterprise protected by the politicians, public official and lawyers he paid off.
Well, Blankenship has been found guilty by a jury of conspiracy to violate US safety laws. He was cleared of the lesser charges of lying to the Federal Government.
Sadly, he faces only 1 year in jail, but activists and law enforcement officials praised the decision. U.S. Attorney Booth Goodwin called the verdict “a landmark day for the safety of coal workers.”
Journalist and historian Jeff Biggers wrote that Blankenship’s conviction was a “historic first step in holding mining outlaws accountable for their reckless operations.” Biggers continued;
“For the first time in memory for those of us with friends, family, miners and loved ones living amid the toxic fallout of the coal industry, this conviction may only serve as a tiny reckoning of our nation’s complacency with a continual state of violations, but it could begin a new era of justice and reconciliation in the devastated coal mining communities in Appalachia and around the nation.”
The Corporate Crime Reporter quotes University of Maryland Law Professor Rena Steinzor, the author of Why Not Jail?: Industrial Catastrophes, Corporate Malfeasance, and Government Inaction, who has argued for more aggressive prosecution of corporate executives:
“This conspiracy was the primary cause of an enormous explosion that killed 29 men in the worst mine disaster in 40 years. Although the jury was not presented with the question whether Blankenship was directly responsible for the explosion, it did decide that he played Russian roulette with his miners’ lives.  By underfunding efforts to comply, harassing employees to ignore safety rules so they could “dig coal” faster, and threatening managers with dismissal if they worked to solve ventilation and other problems at the mine, Blankenship made an already hazardous workplace into a horror show that made men fear for their lives every time they journeyed thousands of feet underground.”
The Corporate Crime Reporter quotes Rob Weissman from Public Citizen:
“Today’s guilty verdict should send the message to coal company executives that society will no longer tolerate this trade of miners’ lives for coal and profit. Indeed, it should send a message to CEOs across the country: No more recklessly endangering workers’ lives, and you will be held criminally liable if your actions – and inaction – cost lives.”

Articles about the decision are here and here.