“As crimes pile up they become invisible”

“Corporate crime poses a significant threat to the welfare of the community. Given the pervasive presence of corporations in a wide range of activities in our society, and the impact of their actions on a much wider group of people than are affected by individual action, the potential for both economic and physical harm caused by a corporation is great.” 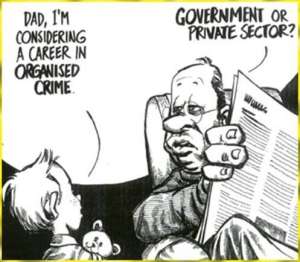 In two recent submissions, I argue that Australia is in the wake of a global and national epidemic of corporate and business malfeasance, lawlessness and criminality, and has become a haven for corporate and white collar crime. Crimes committed by those at the top of the corporate (and political) hierarchy are routinely ignored or brushed under the carpet and Australian governments and the various regulatory authorities have failed to take action against increasingly egregious and escalating levels of unlawful and criminal conduct by corporations and business.

One submission was to an Australian Senate Inquiry into Penalties for White Collar Crime (which has since lapsed because of the government’s dissolution of both houses.) My submission is available here as Submission No 18 under the banner of the Nemesis Project which I coordinate.

The second submission was to the Federal Attorney’s General’s public consultation on Deferred Prosecution Agreements for corporate and business crime (submission is not yet publicly available but will be here).

In the submission to the Senate Inquiry into Penalties for White Collar Crime, I argue that:

These views were supported by numerous other submissions to the Senate Inquiry, as well as a recent report by the Australia Institute.

A submission to the Senate Inquiry by the Economic Consultancy LF Economics provides a damming indictment of corporate criminality and control fraud within the FIRE sector (finance, insurance and real estate).

They contend that systemic criminal activity exists in the FIRE sector, with the full knowledge of all the regulatory authorities and State and Federal governments, and places consumers at grave risk of having their finances and livelihoods destroyed.

LF Economics calls for much greater enforcement and prosecution of corporate and financial criminality:

Australians have been betrayed by the regulatory agencies’ neglect and continual siding with lenders and corporate management, despite their full knowledge of the catastrophic pain endured by many who have lost their homes, assets and life savings. ….. A strict focus on rules, regulations, standards, codes and penalties will have a negligible effect on control frauds because these crimes are simply ignored in reality. Two decades of fruitless inquiries and tweaking of innumerable rules and regulations has merely contributed to the losses endured by typical ‘mum and dad’ investors, now into many tens (perhaps hundreds) of billions of dollars. The nation already has an abundance of appropriate laws and regulations to contain and dismantle these control frauds, yet regulators are averse to enforcement, rendering these powers null and void.

Despite this corporate crime wave, the Abbott/Turnbull Government is considering introducing a Deferred Prosecution Agreements (DPA) Scheme to give corporations accused of wrongdoing and criminality the opportunity to defer prosecution in exchange for a monetary payment and compliance with a range of conditions. DPAs involve a shift from prosecution to compliance.

A DPA is a contractual agreement between government and a corporate entity that allows government to impose sanctions and set up and monitor institutional changes, in exchange for an agreement that government forego further investigation and corporate criminal indictment.

Governments and regulatory authorities (particularly in the USA and UK) have relied primarily on deferred prosecution agreements, however corporations and business continue to engage in unlawful and criminal conduct. Indeed, the criminality has intensified and become more brazen.

In the US, despite an epidemic of criminality, the authorities have been unwilling to charge and prosecute corporate criminals and one consequence of the adoption of DPA’s, is that Federal prosecutions of corporate and white collar crime is at a 20 year low.

In my submission, I argue that Deferred Prosecution Agreements are no solution to the epidemic of serious corporate malfeasance and criminality that has made Australia a haven for corporate crime.

My submission opposed the adoption of a DPA scheme in Australia.