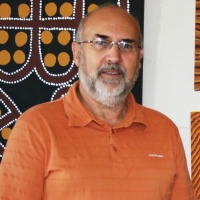 Dr Brian Steels is Director of the Asia Pacific Forum for Restorative Justice and coordinates the Institute for Restorative Justice & Penal Reform in Australia. Dr Steels is also a Researcher at Curtin University at the Centre for Aboriginal Studies and his work among Aboriginal Communities as a researcher and counselor is well known. Brian is a Board member of a regional Aboriginal Art Group, where his social justice connections are well used and documented. He has a special interest in Indigenous peoples throughout the region including Japan, Taiwan, China and India. Within Australia his experience in sentencing circles, family conferencing and healing ceremonies is well recognised among local people and his peers.

He is a Visiting Lecturer at the Crime Research Centre, UWA, lecturing in Restorative Justice to Masters of Criminal Justice, as well as a Lecturer and Honorary Fellow at the Law School, Murdoch. He is the International Representative for Justicia Restaurativa Y Mediacion Penal, Espanola.

He is an International Facilitator, Trainer, and researcher with a focus that includes RJ Practices, policies and philosophies within and outside of the criminal justice system, as well as prisons.

His work for Penal Reform as a Critical Criminologist as well as an activist sets him apart from many of his peers as he sits among the world’s foremost Convict Criminologists. His book ‘Declared Guilty: The Never Ending Story’ shows his talent, experience and academic rigour that provides an insight into the penal estate that is often censored by media and departments alike.