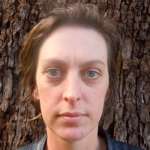 Jess Beckerling is the convenor of the WA Forest Alliance. She has been campaigning for native forest protection since she was 17 when she deferred from her degree in politics and economics to join an old growth forest blockade near Pemberton.

Jess is now living in WA’s south west with two young children while studying environmental science and leading the campaign to protect the State’s native forests.

Jess won the State Youth Leadership Award in 1999 for her role in the blockade camps promoting non violent direct action. More recently she has been acknowledged with awards from the Australian Conservation Foundation and from the Conservation Council of WA for her ongoing work for the environment.