Celebrating a history of Indigenous resistance for our independence 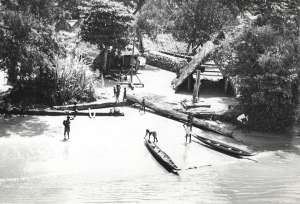 I am sitting in the middle of a pristine untouched rainforest that belongs to the Maroon people of Jamaica. With no taxes, no police and hardly any crime, the independent town of Accompong is in western Jamaica.

‘A nation within a nation,’ is the legal status and autonomy of these Indigenous Peoples who helped runaway slaves and integrated them into their society. Now called the Maroons, these runaway slaves, together with the local Indigenous people, formed armed strategies of resistance.

Maroon communities faced great odds to survive against white attackers and yet continued to obtain food for subsistence-living and to reproduce and increase their numbers.

It was here in 1739 the Maroon slaves signed a peace treaty with the British to gain semi-sovereignty over the area. Today, the Treaty still stands.

The town is governed by an elected ‘Colonel’, currently Colonel Frank Lumsden, a tall, handsome and athletic man who runs the town as an extended family and community.

Their history is amazing.

In the New World, as early as 1512, black slaves had escaped from Spanish and Portuguese captors and joined Indigenous peoples to survive. The English sailor Sir Francis Drake even enlisted several of these slaves to help fight during his raids on the Spanish.

As early as 1655, runaway slaves together with the Indigenous people had formed their own communities in inland Jamaica and by the 18th century, Nanny Town and other villages began to fight for independent recognition.

Maroon communities were able to thrive by growing crops and hunting. Here they grew in number as more slaves escaped from plantations and joined their bands.

Seeking to separate themselves from whites, the Maroons gained in power and amid increasing hostilities, they raided and pillaged plantations and harassed planters until the planters began to fear a massive slave revolt.

When the British captured Jamaica in 1655, the Spanish colonists fled, leaving a large number of African slaves. Rather than be re-enslaved by the British, the slaves escaped into the hilly, mountainous regions of the interior of the island, joining those who had previously escaped from the Spanish to live with the Indigenous people.

The Maroons intermarried, establishing independent communities in the back country.

They survived by subsistence farming and by raiding plantations. Over time, the Maroons came to control large areas of the Jamaican interior.

Their plantation raids resulted in the First Maroon War.  The two main Maroon groups in the 18th century were the Leeward and the Windward tribes, the former led by Cudjoe in Trelawny Town and the latter led by his sister, Queen Nanny.

Queen Nanny, also known as Granny Nanny, is the only female listed among Jamaica’s national heroes. She has been immortalised in songs and legends. She was known for her exceptional leadership skills, especially in guerrilla warfare, which was particularly important in the First Maroon War in the early 18th century

To this day the Maroons in Jamaica are to a small extent autonomous and separate from Jamaican culture. The isolation used to their advantage by their ancestors has today led to their communities being among the most inaccessible on the island.

Eleven Maroon settlements remain on lands apportioned to them in the original Treaty with the British. These Maroons still maintain their traditional celebrations and practices, some of which have West African origin.

As a Kamilaroi First Nation Australian I cannot think of any better place to meet other Black and Indigenous peoples from around the world.

As is the case in Australia our conversations here soon end up about the concerns regarding incarceration, youth suicide and issues of mental health. The common theme in the discussions is everyone generally agrees the reasons for these problems is a lack of agency for our mobs, cultural intolerance and persecution.

It doesn’t take long to realise once you start talking with peoples from other countries that the situation in Australia is occurring throughout the rest of the world.

Professor Verene Shephard from the University of the West Indies asserted in her demand for repatriation ‘one of the institutions that helped contribute to mental slavery is the education system.’  It has been a topic of discussion by me many times in my articles.

Dr Marva McClean, Social Justice Educator and esteemed Nanny of the Maroons Scholar said during her presentation: ‘I believe the major reason our students are not successful is they do not see themselves in the curriculum of their own classrooms. They are made to feel as others, outsiders whose voices are not relevant’.

The conference I am attending, and will be speaking at, started with Traditional Dance and Ceremony as Colonel Frank Lumsden gave thanks to his peoples’ ancestors and also those ancestors of the many groups of Indigenous people who have gathered from around the world. I feel a strong sense of unity and welcome as he gives mention to the ‘ancient people of Aboriginal Australia’. I am there with fellow Warraimay First Nation Australian scholar, Dr Vicki Grieves and she also stands as if at attention with Colonel Lumsden’s speech, feeling a pride seldom shared when we are back home in Australia.

After the opening ceremony dancing and drumming the panel discussion began. The very first presentation was from Dr Erica Neeganagwedgin, representing the Centre for World Indigenous Knowledge and Research in Canada.

Dr Neeganagwedgin spoke of her own Taino First Nation Jamaican identity, her Indigeneity, her peoples’ resurgence and self-determination. The Taino, like our Palawa brothers and sisters from Tasmania, were once declared as extinct.

Her lecture was as moving as it was passionate and she spoke to all Indigenous people gathered when she stated: ‘We need to remember the struggle of our ancestors, feel their blood within our dirt, their whispers in the air we breathe and continue the fight to remain ourselves’.

Resistance against values of greed, position and commodity have all been universal themes at this conference. What was also universal was the amazing respect we gained from each delegate once they realised we were Aboriginal First Nations Australians.

Incredibly, we are seen as a hope to others! It is sad back home some of our leaders are selling out and moving away from the very truths that our Aboriginal brothers and sisters overseas are holding close to their hearts and identities.

I also found it very interesting that Aboriginal was the main term of reference by these brothers and sisters and even those who came from Canada, where First Nation originates were reluctant to use that First Nations term, instead preferring the term Aboriginal.

As readers will know, I bounce between Indigenous, First Nation and Aboriginal but Aboriginal is the term I use the most. This was not a conscious thing but was reaffirmed through this gathering.

I was honoured to moderate a session where Dr Anne Bouie, an independent historian and mixed media artist from the United States, gave a lecture on ‘A Loud Silence: The Visual Arts as Tools of Resistance and Rebellion’.

It was one of the moments of the conference when Dr Bouie started to bring out packages of dirt she had gathered from slave plantations and extermination camps from around the world.

This was performance art played out by a master architect, who held us all emotionally spellbound in her portrayal of graphic memories and fights.

I had the pleasure of sitting with Dr Bouie the day before as we both waded our feet in the fresh running river water that surrounds Maroon land telling her I was a freshwater Blackfella and how from there, fresh and saltwater ideologies embed our roots as intellectual trade beginning with creation.

As an African-American she explained to me how lucky we are that we still live on country no matter the trauma associated to our past.

We then spoke of our shared trauma as people of colour and she said to me: ‘You know that no matter how bad you think it was, it was worse than you can imagine as many things went unsaid to protect the memories of the dead.’  I knew what she meant. I too have kept secrets in my closet about loved ones and even myself that no one ever needs to know.

The more I shared and spoke with these mobs from around the world, the more I realised how much we need to all continue to teach, educate our young ones and remember our old people.

The secret to the Maroon success has nothing to do with mining or commercialisation – they don’t allow either. The reason they function with no crime and remain self-sustainable is because they never had their natural resources taken from them.

I wrote some weeks back that ‘the reason traditional society does not work today (in Australia) is only because, like any society, it needs resources and these have been taken and without any staple food or industry, which we had in abundance prior to colonisation, any society and particularly Western capitalism would fail.’

The Maroon people show us the dream is still there as long as we keep fighting. We have a right to one day have our resources returned to us, to our own governance and to re-establish our own community values and teaching. Anything else other than these demands is a compromise.

I need to thank both Dr Paul Youngquist, University of Colorado and Dr Frances Botkin, Towson University, for inviting me to speak at the conference and I encourage other Aboriginal Australians to attend next year.

Believe me when I tell you it is an experience you will never forget.

Dr Woolombi Waters is a Kamilaroi language speaker and writer and lecturer at Griffith University. He writes a weekly column for the National Indigenous Times.