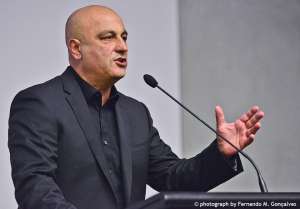 Gerry Georgatos has been travelling the nation highlighting the extensiveness and nature of suicides among the First Peoples – and that we have to act now – Photo, Fernando M. Gonçalves

During this period there was an average of 2,400 Aboriginal and/or Torres Strait Islander deaths per year – therefore the average of 100 per annum over a ten year period.

I estimated that the reported death rate in the ensuing five year period would more than likely increase to 130 per year and to at least one reported suicide in every 20 Aboriginal and/or Torres Strait Islander deaths.

For related reading: NACCHO – research by Gerry Georgatos – Estimated 400 suicides in our communities

The 130 reported suicides are sadly now a fact. This tragedy need never have occurred. However it is even much worse because the reported data masks a disturbingly dark narrative. So far in this article I have written about reported suicides however because of various reporting issues and criteria there is in fact an underreporting of suicides. I estimate that the suicide rate of Aboriginal and/or Torres Strait Islanders, nationally, is around one suicide in 12 deaths.

Furthermore, the increasing death rate in general is masking the high suicide rate among young Aboriginal and/or Torres Strait Islanders. In the 1990s on average less than 2,000 Aboriginal and/or Torres Strait Islanders died each year, whereas now with increasing impoverishment and economic inequalities in many regions the death rate has increased to more than 2,000 on average per annum and closer to around two and half thousand deaths per year – a variance of about 800 more deaths per year in the last decade compared to the mid-nineties. If we disaggregate to age categories we discover horrific narratives. If you are an Aboriginal and/or Torres Strait Islander and aged 14 years and less, suicide is the second leading cause of death – and you are eight times more likely to die by suicide than non-Aboriginal Australians aged 14 years and less.

If you are an Aboriginal and/or Torres Strait Islander and aged 15 to 35 years of age, suicide is the leading cause of death – 30 per cent of deaths in this vast age group are reported as suicides – therefore nearly one in three deaths in this 20 year age group are suicides. This is an abomination, indicting this nation and its governments of a humanitarian crisis it has not only failed to respond to as a pressing issue but also of perpetuating this crisis.

From 2001 to 2010, one in 20 deaths of Aboriginal and/or Torres Strait Islanders was registered as suicide.

In 2012, one in 22 deaths of Aboriginal and/or Torres Strait Islanders was registered as suicide.

In 2013, one in 20 deaths of Aboriginal and/or Torres Strait Islanders was registered as suicide.

In 2013, 385 Aboriginal and/or Torres Strait Islander deaths were classified as external causes. Suicide took 138 lives – 99 males, 39 females but underreporting issues classified what many of us know should have been classified as suicides as other. But whether it is one in 12 or one in 20 it is a humanitarian crisis.

I have written this summary because as I got right the real time suicide numbers and averages and projections for 2012 and 2013, tragically I will be right again on the numbers – people dying by suicide – for 2014 and 2015 and in what lies ahead for us unless we act now and in the ways I have been describing, reporting and campaigning for.

If we do not act in the ways I, and some others, have been stating, that all of us should be stating, then it is bastardry, gutlessness, and much more than just plain wrong.