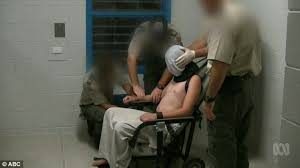 Australia’s criminal justice system, its sentencing laws, its punitive bent are carriages of broken lives to ruined lives, fating young lives to the dark and lonely edges of society.

In the United States, the Annie Casey Foundation report ‘No Place for Kids: The Case for Reducing Juvenile Incarceration,’ only a few years ago assembled juvenile crime statistics that evidence why locking up children does not work but only serves to displace youth into a constancy of aberrant behaviours and into the culminations of criminality. The United States criminal justice system and penal estate is the nightmare that every nation needs to avoid. One in four of the world’s prisoners are in an American jail. Nearly one per cent of the American population is in prison. The United States has thrown at inmates every imaginable punishment, degradation, humiliation, brutality, cruelty only to see prison after prison built and a despicably burgeoning industry of punishment around this penal estate. Some American prisons, such as the chain gang and hell hole tent prisons of Arizona are in effect a mirror of Guantanamo, Abu Ghraib and Bucca prisons. In fact the architect of Arizona’s most gut-wrenching prisons, one of them one of the world’s most abominable and punishing prisons, was called upon by the George Bush Jr administration to help design Abu Ghraib and Bucca.

It is not just that we know that cruel punishment does not work but we also have the evidence before us that kindness works, with the Scandinavian countries leading the way with prisons of a communal narrative driven by restorative and rehabilitative justice and practices, where lives are rebuilt, lives redeemed. The Scandinavian countries have Europe’s lowest reoffending rates. In many Polynesian and Micronesian cultures there are no juvenile detention centres and children are instead mentored.

Why has Australia the highest incarceration rate of juveniles? It is an incarceration built on the back of Aboriginal and Torres Strait Islander children. Of children who should be supported and whose families need a helping hand. Deprived communities are isolated by both the Australian silence and its coterie of prejudices that deliver the power imbalance of White privilege, White terms of reference. Equality long overdue is still denied and as long as White terms of reference are the hand that rules then the divides will widen.

The more west we journey across the continent the higher the incarceration rates of Aboriginal and Torres Strait Islanders, the worse it gets.

We saw recently the degrading and abominable behaviours of personnel at Don Dale juvenile detention centre, and of the appalling conditions children are detained and punished within. The situational trauma of incarceration, punishment enough, is compounded by a constancy of traumas. In general, the children come out of juvenile detention in a worse state than when they went in. So what was the point of their incarceration? To pile them with self-loathing, anger, hate so that they go off the rails? Where is the mentoring? Where is the counselling, the rebuilding of their identity and the restoring of their self-worth, of the improving of their lot?

On average a child is imprisoned in juvenile detention for six months. To describe their incarceration as ‘detention’, like it’s some after class school thing, is insulting.

What the nation was told by ABC’s Four Corners happened at Don Dale indeed happens across the nation at other juvenile detention centres. Riots do not happen for the ‘hell of it’ but for good reason. Only a few years ago Banksia juvenile detention child inmates, up to half of the children imprisoned in Banksia, protested riotously. Protests and riots are a scream for help.

Corrective Services and their public relations mob can publicly define lockdowns, isolation units and ‘separations’ in whatever way sells their bullshit but in the end lockdowns, isolation units and separations are pits of cruelties, disgusting punitive crap that whip in layers of trauma, that damage the human psyche, that compel the human mind into disordered thinking and psychoses.

There are nearly 1,000 children incarcerated in juvenile detention, with more than half comprising Aboriginal and Torres Strait Islander children. But there are also nearly 5,000 children sentenced to punitive community supervision orders.

More than a quarter of the Australian juvenile detention population have been removed from their families. Standalone for Aboriginal and Torres Strait Islander children incarcerated it’s nearly one in two who at some point have been removed from their family. Instead of trauma informed recovery mentoring, the punishing and damaging continues to be piled on, as if the deal is to pulverise the spirit, to do in all and any chance of hope.

The nation’s most elevated risk group to serious depression and to suicide are individuals who as children were removed from their biological families.

The children who finish up in the dungeons of juvenile detention are among the nation’s most vulnerable children, damaged and hurting. They need our help, for us to validate them, not for us to take them from the broken to the ruined, to the irreparable, to toss them to the winds, to fate them to even worse. We who sit by and allow this to idle by are less than nothing.

The Annie Casey Foundation report is important because it notes despite the United States high rates of juvenile detention that indeed, unlike Australia, in some states the juvenile detention population has been decreasing. Many jurisdictions have moved towards various reformative practices including restorative justice and to problem solving courts where victims, perpetrators and community elders are brought together.

The report was released in October 2011 and noted an emerging trend in which 18 States had closed more than 50 juvenile corrections facilities during the preceding four years.

The report found that within three years of release, 72 per cent of the youth were convicted for re-offending. More importantly, the report found that from 1997 to 2007, in the States which had engaged reformative practices and worked much more closely with their troubled youth rather than locking them up, that they not only reduced juvenile detention numbers but also “saw a greater decline in juvenile violent crime arrests than States which increased incarceration rates or reduced them more slowly.”

Now that it has emerged that the United States cannot continue to afford to keep jailing children the alternative is to try to ensure they do not offend or re-offend and work with them in humane ways rather than the brutalising force of locking them up and calling it detention.

Will Australia likewise wait till juvenile detention becomes as unaffordable as it has in the United States or will it act now as is it is weakly indicating?

Juvenile detention is not easy pickings or a hotel like stay for our youth. It is a prelude to adult prison. The Annie Casey Foundation report found that from 2000 to 2010, one in eight confined youth reported being sexually abused by either staff or other youth.

Bart Lubow, director of the Juvenile Justice Strategy Group at the Annie Casey Foundation, and a former director of Alternatives to Incarceration for New York State, said in October, 2011, “This report highlights the crucial challenges facing the youth corrections field. Our hope is that the research will serve as a catalyst for developing more effective and efficient juvenile justice strategies.”

In Rhode Island the reduction is 79 per cent and in New Hampshire 86 per cent.

The Annie Casey Foundation report argued that even the reducing of the detention population, without extensive reformative measures in place, coincided with a reduction in arrest rates. This indicts the harshness of detaining children, and adults, and that indeed a state of imprisonment brutalises people to such an extent that the situational trauma damages an individual’s operations and functions, degenerating them to continuing stress disorders post release and making them vulnerable to re-offending and not forgetting suicide. In the first year post release suicide rates are at least five fold the annual suicide rates in prisons and detention centres in Australia – this is an endemic finding throughout the world’s Western nations.

In eleven States that reduced juvenile incarceration by more than 42.5 per cent and up to 60 per cent, and hence with a median average reduction of 50.5 per cent this led to a 43.1 per cent median average reduction from 1997 to 2007 in violent offence arrest rates. This is indicative that the prison experience is not only brutalising and damaging prisoners but that it sends people back into society worse than they went in and therefore vulnerable to being dangerous to others.

European countries have been working to lower juvenile detention rates. The Scandinavian countries are recording the greatest successes. Norway has enjoyed profound success in reducing its prison population and in markedly reducing re-offending rates with reformative practices and with more communal open-type prisons such as Bastoy. Norway has the lowest re-offending rates in Europe. But England and Wales with harsh penal estates have high juvenile detention rates. According to the Howard League for Penal Reform most of Europe deliberates juvenile offences as welfare issues and works to resolve the issues of troubled youth. Once again Australia’s Aboriginal youth are incarcerated at rates that make England’s and Wales’ rates of juvenile detention meek.

The No Place for Kids report came up with several recommendations.

Change the laws to limit incarceration to those youths who have committed serious offences.

Invest in family focused treatment interventions while they are in detention.

There should be an investment into community based services.

Time on remand or as unsentenced must be reduced and access to problem solving courts and Children’s Court sped up.

Alternatives to detention centres should be facilitated. In Western Australia there is only one monolithic detention centre for all ages between 10 to 17 years. Alternatives can include treatment based group homes and supervised community group programs.

A few years ago I spoke with restorative justice expert, Dr Brian Steels.

He said Australia had to look at its Aboriginal youth and stop blaming them and then punishing them. “Look at the disadvantaged youth of Spain, 50 per cent are unemployed but the crime rate has not spiked.”

“Indonesia has ten times the population of Australia and more Indonesians are in abject poverty than the whole of the Australian population but few of their children are removed from the family into either the care of the state or into detention.”

Poverty is not a crime but our jails are filling with the poor.

He said that it is time families were assisted in ways that they in turn can provide the type of role modelling and nurture that children need.

He said that India has social problems that pale Australia’s social ills but neither are the Indians filling their juvenile facilities with their children. “Everyone knows that children need their parents and that the key is parenting, and if we want to address the problems then we have to work with the families and communities.”

We should not forget that our prisons are filled with the victims, and the children of the victims, of the Stolen Generations.

Aboriginal and Torres Strait Islander children are sentenced and incarcerated at three times the rate of non-Aboriginal children arrested. This is another reason why many of us are calling for the national rollout of the Custody Notification Service, on which I have written extensively.

–           Gerry Georgatos is a suicide prevention researcher, a prison reform expert and advocate who believes that children and adults should not be incarcerated for non-violent offences. He has visited prisons on a number of occasions to inspire the incarcerated to hope and various opportunities pre-release and post-release.

You can listen to Gerry Georgatos on incarceration, juvenile detention and the Custody Notification Service here and here.