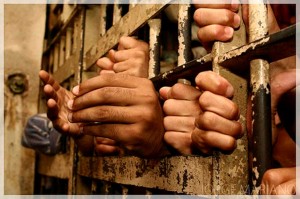 Lo and behold, Australian prison numbers are on the increase, record high – and Aboriginal and/or Torres Strait Islander peoples now comprise nearly one in three of all prisoners. 30 per cent of the Australian prison population is made up of Aboriginal peoples, up from the much touted 26 per cent, the more than one in four of all prisoners. As a researcher in custodial systems and as a prison reform advocate I predicted the rise, accurately. I have also predicted that the Australian prison population will near double by 2020 and that one in two prisoners will identify as Aboriginal and/or Torres Strait Islander persons.

Our custodial systems are in disarray – with the Australian prison population now over 31,000, having doubled from 15,000 in 1992 to 30,000 in 2012 – and the imprisonment of Aboriginal peoples having skyrocketed from 1 in 7 of all prisoners in 1992 to 1 in 4 in 2012 and now to nearly 1 in 3. More than 8,500 of our prison population are ATSI peoples. Western Australian prisons hold more than 2,000 of the 8,500 ATSI prisoners. WA incarcerates Aboriginal peoples at the highest rate in the nation, indeed, from a racial measure, at the highest rate in the world.

One Government report after another argues that the Close the Gap is being bridged, that there are improvements in a number of indicators, but they cannot be a true reflection of ATSI peoples if incarceration rates say otherwise, if the rate of premature deaths say otherwise – one in three Aboriginal persons in Australia is dead before the age of 45 years. They cannot be a true reflection if more than one in four Aboriginal persons die by suicide each year. There is quite a con job going on to make us think otherwise. But any con job or rose-coloured glasses only means that honest discussions and the national conversations that need to happen are not happening.

The penal estate is a pronounced failure. The criminal justice system is a broken system. The penal estate will need to build many more prisons to accommodate the doubling of the prison population every decade. If it needs to keep on building more prisons, then it is a broken system. If one in every 70 Aboriginal and/or Torres Strait Islander people in this nation are in jail at any given time then the criminal justice system is broken. But if the criminal justice system is broken hence the Government that underwrites is broken. There is a self-evident failure by Governments to identify and address the underlying issues that drive these horrific offending, arrest and imprisonment rates. If you wish to know the heart and minds of a nation, of its legislators, then on any day or night look into its prisons, and you will know the heart and minds of our legislators, and of the soul of the national consciousness.

It is well beyond time for restorative justice practices – restorations to impoverished communities, the reduction of extreme poverty – restoration of human worth, the bona fide belief in improving the lives of others, the working with others psychosocially and tangibly rather than in bundling them into a labyrinth of cold dank cells, out of sight, out of mind for a period of time.

When we assist someone in need, someone in trouble, someone who is wayward, someone in the abject morass of tumult, we help not only that individual but also that person’s family, that family’s extended families, and that person’s legacy to his/her children, we help society as a whole. The cost in doing this is cheaper and leaps and bounds more beneficial, in the short-term and long-term, than the more than $100,000 per annum it costs to upkeep someone in a cold dank cell. Let us always consider the evident unreported costs on families, communities, society when we insist on gearing someone only to the presumption of a life of crime, and to familial dysfunction. Personal responsibility is one thing, but this personal responsibility business belongs also to Governments and society.

The penal estate should be a haven of psychosocial services, elementary and higher education opportunities, havens of wellbeing opportunities, havens of employment skills training – the penal estate where it is to exist should be no less. Redemption and friendship are core of any genuine humanity. How we treat the most vulnerable and at-risk in our prisons will tell us not only about who we are but of the society that we can have.

In my experience on average people come out of prison worse than they went in.

The penal estate is a failed experiment in the deterrence of crime – minor offences or otherwise. 15 years ago, I predicted the doubling of the prison population. Whereas the prison population will double by 2020, the Corrective Services budget will triple. Do we want to become like the mother of all jailers, the United States of America, which imprisons at any one time one per cent of its total prison population? Three million Americans languish in their prisons.

Prison is a predatory place of manifest traumas, multiple traumas, high-end traumas, myriad clinical disorders, cumulative and definitive breakdowns, various depressions, irrecoverable predicaments, disenfranchisement of one from any semblance of self-esteem, cumulative anxieties and situational traumas lagging into continuing stress disorders and disassociated behaviours. People need to be respectfully and patiently cared for and worked with, for them to respond positively. In doing so, this in turn will ensure the majority of those worked with will not re-offend and instead will more than likely consummate productive working and ethical lives.

There must be an acknowledgment of the premise that for every perpetrator of unlawful and immoral acts there is a victim or the plurality of victims. Rather than locking up someone for a period of time to remove that person as risk to society we can work to end the prospect of that person from ever perpetrating another wrong.

The wakeup call for Commonwealth, State and Territory Governments is here – it is time to understand our custodial systems and our sentencing regimes – that they are debacle with more crises in the making. We need to recognise that we have to move away from draconian lock-em cultures and instead inquire into and establish restorative justice practices. Where prisons are needed they should not be harsh environments that only fracture humanity and ensure high re-offending rates. And where the criminal justice system can prevent people from sentencing offenders to jail sentences then it should do so, instead connecting them with support services and people who have been prepared and up-skilled to help them.

The latest quarterly report on Corrective Services released by the Australian Bureau of Statistics describes deplorable rises in jail numbers and imprisonment rates. That Aboriginal and/or Torres Strait Islander peoples now comprise exactly 30 per cent of the prison population should cause us all to hang our heads in collective shame – how the hell did we allow for this disgraceful predicament? It was majorly because of racism – racism by neglect. It was partly because we are a selfish society, bent on our own personal advancement in the world’s wealthiest nation per capita, in the world’s 12th largest economy and that in this merit-based race that we live in, we have learned to not give a damn about those who lag way behind – we disassociate. We have been taught to look ahead and to reach out for as much as possible for our limited moral circle of concern, for ourselves only, and rarely to look over a shoulder or to stop and see those who we have left behind We have abandoned those who need a helping hand. Therefore we too perpetrate crime and make victims. Our victims finish up in our jails, it’s a vicious cycle.

We have more than 100,000 Aboriginal and/or Torres Strait Islander people living in third-world-akin conditions. In the Kimberley, 7 per cent of the region’s population is homeless, 90 per cent of that homelessness is of Aboriginal peoples.

We have no patience for people who get in the way of our increasing merit-based society– the number of unsentenced prisoners – remandees – increased by more than 11 per cent, making them 25 per cent of Australia’s prisoners – this is the highest proportion ever recorded. Four decades ago, the proportion of prisoners who were on remand was 10 per cent. Just lock-em up is the new norm, the no-patience mantra.

The shocking fact is that despite drops in property crime, despite drops in all forms of theft, our prison numbers are skyrocketing! People are being sentenced for a myriad of minor offences – disorderly conduct, misdemeanours, for not being able to pay fines, etc. Imprisonment in itself does not deter crime, have a good look at the Northern Territory and Western Australia. The Northern Territory with the highest imprisonment rate in general in the nation has the highest crime rate, not the lowest. So how does imprisoning people willy-nilly lower the crime rate? It does not. In Western Australia, Aboriginal peoples are imprisoned at the highest disproportionate rates in the nation – the majority of them are not imprisoned for property crime.

The Australian Bureau of Statistics Corrective Services report  showed the number of Aboriginal men in prison had risen by 8 per cent, and women by 12 per cent in the past year, compared to a national prison population increase of 6 per cent.

Nationally, end of September there were 8,551 Aboriginal and/or Torres Strait Islander peoples as prisoners – 7,753 males and 798 females. The total Aboriginal and/or Torres Strait Islander population aged 18 years and over is only 2 per cent of the Australian population. The national average of ATSI imprisonment is now at 2,369 per 100,000 ATSI adult population. But for ATSI adult males the rate increased by 5 per cent on the previous year, to 4,384 per 100,000 ATSI adult males. This rate is the highest in the world, and nearly six times the rate black adult males were jailed at in the last years of apartheid in South Africa.

Corrective Services Australia reported that in terms of jurisdiction, the highest Aboriginal and/or Torres Strait Islander imprisonment rate end of September was recorded in Western Australia – and my own comparative data research found that the Western Australian rate is nine times the rate at which apartheid South Africa jailed its black people.

Reports on Deaths in Custody – people dying at higher rates

Deaths in custody – when will something be done?

Why are more prisoners dying of natural causes?

Quality of life for Australians 2nd only to Norway, but for Aboriginal peoples, 122nd