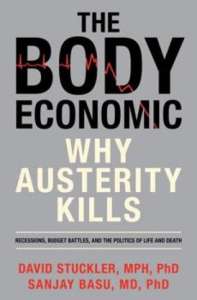 “If austerity were tested like a medication in a clinical trial, it would have been stopped long ago, given its deadly side effects…. One need not be an economic ideologue – we certainly aren’t – to recognize that the price of austerity can be calculated in human lives.”
David Stuckler and Sanjay Basu,“The body economic: Why austerity kills.”

There is a chilling study in the latest edition of the Journal of the Royal Society of Medicine that shows that austerity measures, including reductions in income and welfare support imposed by the UK Government, are killing vulnerable elderly people in England.

The study shows a clear link between rising mortality rates among older people in England and the austerity measures imposed by the UK Government. 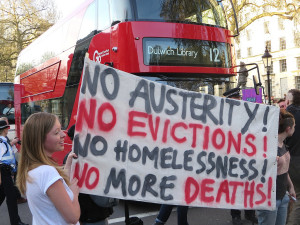 The authors conclude that:

One of the study authors is David Stuckler, whose 2013 book The Body Economic: Why Austerity Kills (co-authored with Sanjay Basu) documents and describes the profoundly harmful effect of austerity policies on the health and wellbeing of vulnerable people and those who live precarious lives.

Stuckler argues that austerity policies imposed by national governments in response to economic crises bring about increases in disturbing public health and housing outcomes, particularly among the most vulnerable people.

He documents the unnecessary suffering and rising mortality rates associated with austerity policies.

Stuckler’s book reveals that austerity polices in Europe and North America contributed to 10,000 additional suicides and a million extra case of depression.

Stuckler describes austerity as ‘a public health disease”. His conclusion is: