Western Australia has often been referred to as the asbestos capital of the world. Not only Perth but regional WA is littered with asbestos clad buildings. For the record, asbestos has been mined for 4,000 years but the mining went large scale at the end of the 19th century and for a long while the world’s largest asbestos mine was the Jeffery mine in Asbestos, Canada.

The hazardous material known as “fibro’ was used extensively in building almost every Western Australian home after Wold War Two and up until 1987.

Some have said that Western Australia is facing a looming disaster. Asbestos houses are a renovation disaster waiting to happen one WA realtor said to The Stringer. 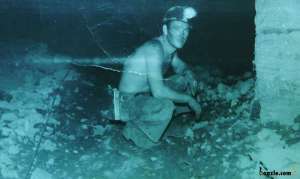 Dennis Henderson in the Wittenoom mine, 1957 – Photo supplied by Roan Henderson

I have just returned from the now de-gazetted town of Wittenoom, in the Shire of Ashburton, where blue asbestos was mined and which took the lives of hundreds and possibly thousands through asbestosis and mesothelioma. The first victim contracted asbestosis from the Wittenoom mine in 1946, soon after the opening of the mine.

Recently, former parliamentarian Ernie Bridge died from mesothelioma he contracted from visiting Wittenoom on ministerial duties during the late 1980s.

The Shire of Ashburton has closed some of the roads leading to the old town of Wittenoom, and has signs on all roads advising of the asbestos dangers in the now closed town. Eight residents continue to live in Wittenoom having refused to leave.

But it is one thing to close down asbestos riddled towns, and it is another thing to not do enough about asbestos throughout the State. It is not right that the line is pushed that much of the asbestos in Western Australia is contained and that is should be left undisturbed. Undisturbed? It is a cop out to push the line that when asbestos contained materials are damaged or likely to be disturbed or when ready to renovate then just call in the licensed removalist. Government should be working towards a plan to remove all asbestos materials where practicable and put human life and its worth foremost. Shires should be calling upon Government to do something, and the Local Governments should coalesce either regionally or State wide and submit action plans and demands to the State Government for the safe demolition and removal of asbestos clad homes that have been inspected and deemed risky. Cost should not be considered prohibitive to any action plan.

Today, The West Australian reported a six year old girl came back from a family holiday on Rottnest Island with a piece of asbestos.

Mother Jacqui Utting said to reporter Tayissa Barone that the family was horrified when they realised what she had in her possession “looked like asbestos.”

“It’s made me really anxious about letting my children frolic around and do what kids do, which is to explore and pick up shells and things. If there’s a danger of them picking up asbestos, it ruins the family holiday,” said Ms Utting.

Ms Barone reported that contractors are now in possession of the 10cm by 5cm piece and will test it.

Ms Barone reported that the contractors made “a sweep of surrounding units and found what appeared to be other small pieces.”

“An RIA spokeswoman said rain or ground disturbance could uncover old material and it had strict guidelines.”

The asbestos roofs on the island were replaced in 2005.

“All asbestos roof material has been removed and a risk register documents any known remaining materials,” said the spokeswoman to Ms Barone.

“Where appropriate, units containing asbestos have a warning notice. Asbestos in a stable condition is not dangerous to health.”

On May 3, The West Australian’s Daniel Emerson reported that almost 740 State houses remained in urgent need of asbestos removal – two and half years after a Government audit tagged them as “high priority.”

Housing Minister Bill Marmion dumped the blame for the delay on the neighbours to the public housing, arguing that they should be up for half the cost of replacing asbestos fences.

Mr Emerson reported that “the Government has been steadily reducing the number of public houses with asbestos-containing materials after a two-year audit completed in December 2010 found the dangerous fibre in 45 per cent homes.”

In how many private homes throughout Western Australia are there asbestos-containing materials?

Should the State Government not have an action plan to financially assist owners to remove these materials?

In reference to the public housing the proportion (45 per cent) has only been reduced to 40 per cent of the State’s 36,676 public houses – from 2,082 to 737 houses according to the Department of Housing.

Asbestos Diseases Society president Robert Vojakovic is disappointed the removals are not being done at pace.

He pointed out that children are more susceptible than adults. “They breathe three times fasters than adults do, and they have smaller lungs.”

Mr Emerson reported that the Department of Housing’s service delivery general manager Steve Parry “said there was health risk when the material was not disturbed.”

But it may be fair to state that is like expecting adults and children to walk on eggshells.

But Shadow Housing portfolio holder Fran Logan said any house that is on asbestos high priority lists should have been repaired by now and he rightly said that the risks should not be played down.

“If they are in the highest risk category, there is a reason why they are there,” said Mr Logan.

Mr Marmion said that the Department of Housing will not expose families to damaged asbestos-contained materials and such materials would be removed before a family is allocated the home.

The numbers need to be crunched, and accepted, and more needs to be spent says The Stringer

Wittenoom has been closed down because it is not safe despite eight residents refusing to leave. One of the residents said that when emergency services crews and police come into town as they did recently to inspect a truck that had caught on fire they come in with protective clothing and face masks.

– Gerry Georgatos, the writer of this article, declares an impartiality conflict of interest having represented victims of asbestos related diseases during the 1970s and 1980s, and who also resides in the South West of WA.

Asbestos homes are no bargain

Leave a Reply to Sam Li