Anna Akhmatova: If All Who have Begged Help

“If all who have begged help
From me in this world,
All the holy innocents,
Broken wives and cripples,
The imprisoned, the suicidal-
If they had sent me one kopek
I should have become ‘richer
Than all Egypt….’
But they did not send me kopeks
Instead they shared with me their strength,
and so nothing in this world
is stronger than I,
and I can bear anything even this”

Anna Akhmatova
If All Who have Begged Help 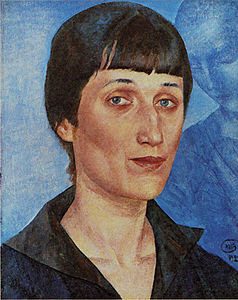 The poet Anna Akhmatova (1889-1966) is regarded as one of the greatest Russian poets.
Akhmatova lived in two different kinds of Russia, pre-revolutionary Russia and the post revolutionary Soviet Union. Her writing falls into two periods -the early work (1912–25) and her later work (from around 1936 until her death), which was more political. Her work was condemned and censored by Stalinist and Russian authorities.
For long periods, particularly in the Stalin years and the 1950’s, Akhmatova was in official disfavour and many of those close to her died at the hands of the authorities. She was considered an official enemy and forced to live a terribly hard life.
Her first husband was executed by the Soviet secret police, and her son and third husband spent years in Soviet prisons and gulags, where her third husband died. In 1949 her son was sentenced to 10 years in a Siberian prison camp.
She survived, partly because her work was so popular and Stalin and the authorities were careful not to attack her directly.
Her most famous poem Requiem documents her experience at the time of her son’s imprisonment. The poem comprises fifteen short poems and explores the grief of mothers for their imprisoned sons and daughters and the suffering and persecution of the Russian people under the rule of Stalin. 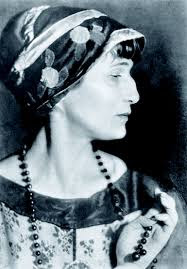 Akhmatova considered the poem too dangerous to write down, let alone publish, so she carried it around with her as she worked and lived across the Soviet Union. The poem was written between 1935-1940 and remained unpublished until 1963.
During WW2 she witnessed the siege of Leningrad (St Petersburg), and it was there she began work on another of her finest poems Poem without a Hero, a poem dedicated to all those who died at Leningrad, which she worked on for twenty years.
Between 1925-1940 and then after WW2, her writing was officially banned. Unlike many of her contemporaries, Akhmatova chose not to emigrate and remained as  a witness to the Stalinist era.
She died in Lenigrad in 1966.
Categories : Arts & Letters