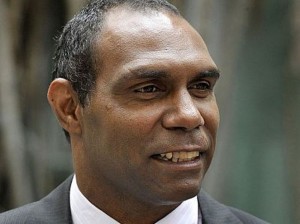 Lex Wotton did time in jail, Craig Hurley got away with what he did. Mr Wotton “sought to correct a wrong” by expressing his outrage. Mr Hurley killed a man, beating him to his death in a police cell. Where is the justice? Mr Wotton will continue to chase down the justice.

In late 2008, Mr Wotton was found guilty on the single count of rioting with destruction. The Brisbane District Court spent two weeks on the trial. It took the all-White jury several days to deliberate unanimously Mr Wotton’s guilt. He was sentenced to six years with a non-parole period of two years.

When Mr Wotton’s mandatory sentence period was up and due for parole, the Queensland Government ensured the parole board hit Mr Wotton with an unprecedented gag order. Mr Wotton was furious but there was no other way to his immediate release from prison. His parole conditions would include that he would not be allowed to speak to the media and that he needed permission to attend public meetings on Palm Island. A couple of years ago, Mr Wotton challenged the gag order in the High Court, but all this served was to prove how few constitutional protections we have in reference to freedom of speech. The High Court decision proved that our freedom of speech is indeed restricted.

Four years before the sentencing and incarceration of Mr Wotton, Mulrunji Doomadgee was killed in a cell of the Palm Island Police Station. The officer responsible for his death, Sergeant Craig Hurley claimed that Mulrunji had ‘tripped’ on a step and the fall caused his death. But the criminal justice system found the firepower to incarcerate Mr Wotton!

Mr Wotton is a good person and an inspirational leader. The years in jail and the years gagged have not waned his belief that in an unjust world that justice can be chased down. Mr Wotton’s jailing was political, a message to Mr Wotton and to Palm Islanders to not fight back, to forget about equality and change agency.

The Coroner’s report on Mulrunji Doomadgee found he had suffered four broken ribs, a ruptured spleen, a torn portal vein and his liver just about cleaved in two. Yes indeed, Sergeant Hurley beat him to death. No question. He has never done a day in jail. There is no other conclusion to be made than it was a political decision to protect a police officer. The Queensland Police Union supported Mr Hurley. One of the witnesses to Mulrunji’s death was Patrick Nugent, he was in a nearby cell. Mr Nugent would soon be found dead. Mulrunji’s death took its toll on his family. His son Eric, at only 18 years old would be found hanging from a tree. Palm Island had become a place of pronounced injustices and grief – the climate of racism was burning. Queensland had become Australia’s modern day Alabama.

Mr Wotton said he believes “that things that go around come around.”

“I believe there will be justice one day for Craig Hurley. Does not matter how many years pass, there will one day be an inquiry that will bring justice.”

“Sometimes the justice takes decades, wrongful convictions or people getting away with wrongdoing but I am a believer that we will get the justice for what happened at Palm Island.”

“We cannot play down the truth, the fact is Hurley beat Mulrunji to death. No question about this,” said Mr Wotton.

“The evidence is overwhelming. There have been three inquiries proving what happened.”

“But somewhere high above ordinary people, there are those who protected Hurley.”

“Instead I finish up in jail, (Mulrunji’s) family devastated, our community hurt, more distrust of White Australia in what happens to our people all over this continent again and again.”

Mr Wotton said that his time in jail “was stressful but that is the injustice I had to deal with.”

“It was disappointing being in jail but what I saw was what people endure in prison, and prison makes it worse for them.”

“There is no rehabilitation in there, no programs to help people, nothing to help them get a job when they come out or to heal from their wounds while in there.”

When Mr Wotton was released from prison at first he was told it would be with normal parole conditions but when he was required to sign the paperwork, a gag order was included.

“How is it the parole board is ready to release me, that no Justice said that there should be any gag order and then only days out from my having to sign the paperwork, the lawyers come with the gag order, the additional conditions. I would have to sign the paperwork to get parole with all these conditions thrown in… it was infuriating, it was unfair, it was wrong.”

“It was more than likely a direction from the Attorney-General’s Office.”

“I never did anything wrong while in prison. They had nothing to indicate that I was likely to breach any normal parole conditions. I had a stable life to return to, family, children, a job waiting, security and all that. I don’t drink, I don’t smoke, I don’t gamble, I am literate, all of it. I wasn’t in jail because of offending.”

“The gag order is about so many other things. It is about denying my voice. I had developed a profile before I was jailed. It was disappointing to have this growing voice disrupted because we need change for our people not just on Palm Island but across the continent.”

“But then again despite prison and the gag order, jail and the obscenity of a gag order in turn have given rise to what happens and can happen in this country, and to how our people are treated, and the corruption it takes to keep us down.”

“There are not too many strong leaders for our people in this country, some do good work but those whom work closely with Government do Government’s work, not our people’s work or needs.”

The two-time Palm Island councillor said that he had “seen corruption from close-up.”

“There are meetings and lunches, and officials and far too many of our leaders talk, and the leaders go away from the meetings telling our people what the Governments, local, State, Federal, want them to say. Then the organisations of these leaders get all this funding. I call this corruption and I call this betrayal.”

“When I was on council, I stood up to council corruption. Corruption is more unfair than racism.”

The lifting of the gag order could not come soon enough.

“I felt some relief, in some sense, when parole ended and the gag order automatically was lifted.”

“I don’t fear anything from speaking up. Really there is nothing more to say about what went on with the police and the courts, everyone knows. It is out there. What matters now is standing up for freedom of speech, for change for our people, for justice, for the ending of corruption.”

“The cover-ups are known. People know. We just keep on trying for the justice.”

“I don’t have faith in the justice system but I do have faith that we can find justice but it takes times and good people. The legal action we’ve put in motion is part of finding the justice, it is the right thing to do.” Mr Wotton is part of a class action with the Palm Island community in alleging racial discrimination against the Queensland Government and the Queensland Police Commissioner.

“There was no justice with a gag order being imposed but it was the only way I’d be released. We took it to the High Court only to find out how few protections there are for freedom of speech in the Constitution.”

Mr Wotton said that prison is not a remedial experience and rather that in general people come out of prison worse than they went in. He said prison is not rehabilitative.

“Prison is a bad place, there are no real programs, except when you come towards parole, and parole programs are about transition not education or skills to help you get a job.  They are not helping people while in prison.”

We discussed Mr Hurley and the Queensland Police but the following sums it all up.

“One day justice will come, it goes around.”

“One day, even if it is today’s teenagers who will become the leaders of tomorrow, they may be the ones who bring the justice, get the inquiry.”

“Despite double jeopardy laws there is always the chance for justice. There are people out there, people of conscience who may one day finally speak up.”

“I believe it will happen, hopefully in my lifetime.”

“He did the wrong but I went to jail. They found me guilty for what they wanted to find me guilty of. I smashed a police station. I did not ask anyone to come and I did not do any arson or any inciting. I went there to correct a wrong, a wrong that Hurley did and who has got away with it to this day but hopefully the justice will indeed come.”

We discussed the then Queensland Government.

“Would not have mattered if they are Labor, Liberal or anyone, they all piss in each other’s pocket. The racism is the same, the lies are the same, the corruption, the way business is done, and the way people are mistreated are always the same. It doesn’t matter if it is Labor or Liberal, it is the same for our people.”

“Our people on Palm Island need so much more than we have. We should have the right to home ownership for instance.”

“You know, when everything happened on the Island, Noel Pearson and Warren Mundine came to speak with us at a community meeting. I think Noel does some good work but I don’t agree with his leadership. When they came to the meeting I said to them, ‘I would not have invited you fellas…’”

“I said to them, ‘Where have you been all these years while we deal with so many problems, racism, corruption?’ Warren Mundine took exception to my comments. But in the end they were invited by (Premier) Peter Beatty. But they didn’t achieve anything for us, there was no prosecution of Hurley, all we got was just their two cents worth. The Laurence Street inquiry was the work of (Prime Minister) John Howard.”

I asked about his leadership potential.

“We are up against corruption, it’s bigger than racism and racism is discrimination which affects people but corruption in society is what keeps people down, what lets us down, and what helps along racism.”

“Queensland had the Fitzgerald Inquiry – that said it all. Corruption in the police, corruption wherever.”

“Government ministers were jailed. But the corruption goes on, the system is broke but we still need to protest bad laws, like the laws to prohibit gathering in public in numbers greater than three people without permission to protest, well we have to protest these types of laws.”

“Where is the democracy?”

“Where is the fairness?”

“This is why I will keep on speaking out. Maybe someday I will run for parliament, State or Federal.”

“I don’t expect my conviction quashed, because the system is broke and the system needs fixing but the conviction doesn’t stop me from running for political office. We’ll see.”

We discussed the family of Mulrunji.

“We say hello to each other, ask how each other are going.”

“They have a lot of respect for me and I for them.”

“The losses (Mulrunji and Eric) they have suffered have been devastating for all of them. It’s affected the whole community.”