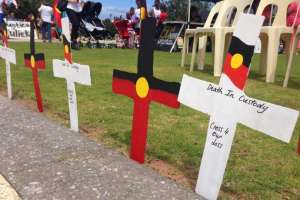 An eleven year child died last year, but by suicide. Nine months later, only days ago, his 37 year old mother took her life. In the last year I have had to look into the eyes of parents who have buried a child aged 11 years, 12 years, 13 years, 14 years, 15 years, 16 years and 17 years. We were not put on this earth to bury our children, but we do. This tragedy and the underlying issues are the pressing issue of our time and they must become the most pressing priority of every government.

When this little boy took his life in the coastal Western Australian town of Geraldton in October of last year, I learned about it the next morning. However when I notified certain service providers, so as to standby for the family, they stated to me that my source was wrong because they would have known about it. But they were wrong and it took more than a week before they realised that this little boy had taken his life.

I worried about his family members, and urged for a through-care plan for the family, the same type of plan that the young boy should have been wrapped in long before he ultimately took his life. Extended family should have been involved to breakthrough the potential for assistance to the immediate family, to the most affected family members. People need people, far too often they just cannot do it alone and the whole self-responsibility mantra is a dangerous dicing with people’s lives.

Over the last several years, I have written widely about the suicides crises and I have delved closely with families who have lost their young to this crisis. My mind’s eye will never forget them, they remain solid in my thoughts, and so too remain with me the suffering of their loved ones. This morning I spoke to a good friend of mine in Adelaide, Narungga Elder, Tauto Sansbury – the incumbent NAIDOC Lifetime Achievement award recipient. Tauto is driving to a funeral as I write this piece – to the funeral of another young life lost to suicide. Before commencing this article I was talking to another friend in Canberra as we discussed the loss of three young people to suicide within a week earlier this year. Those suicides rocked various Canberra communities. Yesterday, a friend in Queensland discussed with me the youth suicides that have rocked families and communities throughout Queensland. I can keep on writing about the loss of life, and what leads to it and I can write about the obscene neglect of all this by one government after another but I have done this. I have shifted my focus to the requisite urging for comprehensive response, and I do so because we do know the ways forward. I have been writing about the extensiveness of the suicides crises and the ways forward for years – more than 200 articles in the last couple of years alone and alongside numerous meetings with parliamentarians.

In recent weeks there have been two important national meetings, both of which I attended and strongly participated in, urging governments to respond to the crises. One was a national critical response meeting calling for bona fide suicide prevention. This meeting was held on July 17 in Perth. At that meeting the Federal Minister for Indigenous Affairs Nigel Scullion flew in to attend alongside leaders and experts from across Western Australia and from around the nation. Urgency was the signature piece of their statements. On July 22, a national meeting was convened in Canberra – at parliament – with three federal ministers present, the Minister for Health, Sussan Ley, the Minister for Indigenous Health, Fiona Nash and the Minister for Indigenous Affairs, Nigel Scullion – with 25 of the nation’s leading experts in mental health and suicide prevention and prominent Aboriginal and/or Torres Strait Islander leaders. Both roundtables were whole day meetings and the most important message was to implement ways forward known to work – not down the track, not in the weeks or months or years ahead, but now.

In delaying ways forward known to work, well this is a moral abomination and because the suicide crises are reprehensibly racialised, any delay or passing of the buck is in fact a veil and layer of racism.

We cannot lay claim that any of our governments have delivered comprehensive responses to various wholesale psychological and psychosocial distresses of families, extended families and to communities as a whole. Not when destructive behaviours, suicidal ideation and suicide take the toll they continue to take.

Our governments have a responsibility to repair the damage that they and their predecessors have done. We can definitely state that the social determinant levels and the social health quotients of far too many communities throughout the nation have been degraded by one government after another.

Last year following the death by suicide of Peter ‘Rabbit, a child who should have been wrapped in support 24/7, I warned of a disconnect between the various services, between responders and I warned of the fact that certain services which should have a 24/7 capacity in fact do not. The young boy should never have been lost. The other day, just nine months after the loss of Peter, his 37 year old mother took her life. She could not cope with the loss of Peter. There should have been the constant of support for her, a through-care plan and long-term, for the family.

His troubled mother had plunged into often unbearable pain after the loss of her son. She leaves three remaining sons behind, the youngest eight years old. They are being cared by grandparents. One grandparent said that the family had received no counselling. They are worried about the impacts on the children after the loss of their brother and their mother.

The mother wrote of suicide on her Facebook but stated she would not go through with it for the sake of the remaining children. But the fact that it was stated should have alerted others and galvanised various vital support because it was indeed a cry for help. She was effectively stating that she was struggling with coping. If you are struggling then your resilience is being tested.

We know that the people most at risk after a suicide are the family members. These are the people who need to be wrapped in care 24/7.

If they do not want to be, you do not give up on them, you do not walk away. You break through with the help and love of extended family. People need people and this has to be an unassailable tenet.

A significant proportion of suicides are of a second or third family member taking their life, and the most vulnerable period is within the first year after the loss of a loved one.

For Aboriginal and/or Torres Strait Islanders aged 15 to 35, who should be in the prime of life, nearly one in three deaths of this age group is by suicide. If this statistic, this moral abomination does not startle the nation into a critical response then what will?

The whole self-responsibility mantra has to be dropped, it is rubbish – people need people and we need to get out there and help them. Their circumstances are Australian made and we have to recognise this imperative and hence respond accordingly and continue to do so till such time as we have reduced at least to parity between the two populations of this continent the suicides rates.

If you are an Aboriginal male in this country you are at least a one in fifteen chance of taking your life by suicide. If you are an Aboriginal child aged less than 14 years of age you are at least eight times more likely to suicide than a non-Aboriginal child. This is a moral abomination. I can only emphasize, that there is no greater legacy that any government can have, than any of us can have, than to improve the lot of others to the point of saving lives.

A Critical Response is being developed urgently by us at the ATSISPEP (the Aboriginal and Torres Strait Islander Suicide Prevention Evaluation Project) in addition to a volume of other work and with the support of the Federal Minister of Indigenous Affairs and relevant stakeholders and community leaders and it will soon be ready. But the sooner it is launched then at long last the journey begins to facilitating some of the ways forward that matter most. We must go forward and with no politics, no egos and no penny-pinching  getting in the way.

If we do not act now, the humanitarian crisis that is at hand, generally missed by the national consciousness, will reach catastrophic levels. When we couple the suicides crises with unnatural and premature deaths, Aboriginal and/or Torres Strait Islander peoples are facing that catastrophe. The worst racism in this nation, which already has a hostile aversion to dealing with the veils and layers of racism, is the one where we are silent about this tragedy and do not respond in the ways that matter.