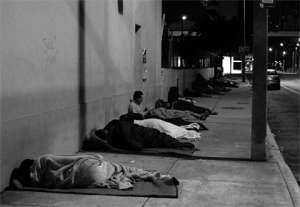 Many reckon they understand the accumulation of life stresses hurting those who live below or in close proximity to the poverty line. Poverty and suicide intersect. Poverty and incarceration intersect. Incarceration and homelessness intersect. The layers of stresses and the sense of wellbeing intersect. A pat on the shoulder is often not enough. Words alone can for some be a slap in the face. Assisting someone to improve their circumstances or helping them in their journey to provide for their family vitally matters. This may keep a family steady or save a life. This is not quite the world we live in.

Seven out of ten of the world’s people live below $10 a day. That people are being lifted out of poverty at a rate where poverty is being reduced around the world is a horrendous lie. However let us glance at the United States of America, often held up by western societies as a benchmark of a successful nation society.

On average each day 123 Americans suicide.

Extreme poverty is a beating endured by a significant proportion of Americans.

The USA, this year and last year will each report around 50,000 suicides, with 2016 reporting 45,000 suicides. The USA’s suicide rate has increased by 25 per cent since the beginning of the century.

The American travesties include the fact that there are more vacant dwellings than there are homeless Americans, and include the increasing criminalising of the homeless.

There are no human rights in the traps and squats, in the alley ways of the empty streets of the night. There is no social justice vocabulary for the homeless.

One in 46 of America’s children will experience homelessness each year.

Poverty alleviation is the way forward to reducing homelessness, incarceration and suicide. It is not happening and will not happen in our lifetimes. The grim reality is much will get worse despite all the good news stories.

In Richmond, Virginia, one in 9 renters faced eviction. The USA is home to 120 million renters, to 2.4 million prisoners, to nearly 5 million more people before the justice systems, to millions of people houseless and more than a million street present homeless, to tens of millions living below the poverty line, to half the American population directly or indirectly affected by poverty, to 123 suicides daily.

Poverty is the issue of our times.