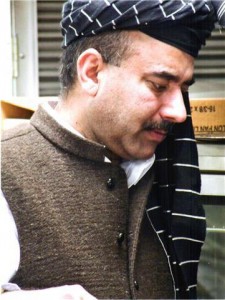 Mr. Ali Gohar, who is London and Pakistan-based, is the founder of Justice Peace Initiatives and remains an advisor to the organisation.

He has a degree in International Relations from Quaid-E-Azam University, Pakistan.

For thirteen years, Mr Gohar served as the Additional Commissioner Social Welfare Cell for Afghan refugees–a project of (UNHCR). In 2002 he completed his second Masters in Conflict Transformation as a Fulbright Scholar at Eastern Mennonite University Harrisonburg, Virginia, USA.

Mr Gohar has worked as a campaign officer with Oxfam GB – working to end “honor” killings and violence against women in the province of Khyber Pukhtoonkhwa, Pakistan. He has also been an television and broadcast anchor, researcher, talk show social commentator, violent conflict investigator – having appeared on many local and international radio and television programs and news formats.

Mr Gohar has written four screened television plays covering themes that have culminated in drug addiction awareness, contemporary HIV/AIDS awareness, domestic violence, restorative justice and on Honor killing. He is also the author of four books on Jirga – Indigenous peace building institutions in Pakistan and Afghanistan – Who learns from whom, Puktoon traditions on modern perspectives, Hujra-Informal community based Indigenous institution and Restorative Justice in Pak-Afghan Content (with Howard Zehr).

Mr Gohar can be contacted at justpeacemail@gmail.com