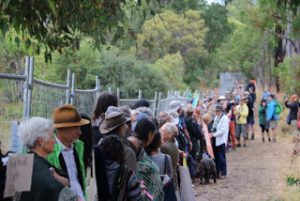 “Protest that endures.. is moved by a hope far more modest than that of public success; namely the hope of preserving qualities in one’s own heart and spirit that would be destroyed by acquiescence”.
Wendell Berry

In Perth’s southern suburbs a remarkable community- based campaign and furious community opposition and protest is delaying the controversial Roe 8 Project, an extension to the Roe Highway, which forms part of the Barnett Government’s Perth Freight Link.

The Barnett Government intends to build the Roe highway extension through the internationally recognized Beeliar wetlands and in the lead up to the March 2017 State Election the Government began clearing major urban woodlands in the suburb of Coobellup to make way for the Roe 8 extension. 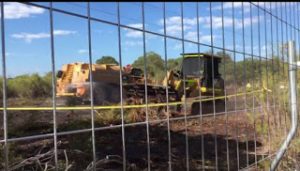 The wetlands and urban woodlands are are an important habitat for threatened species, including the Carnaby’s Black cockatoo and the forest red tailed cockatoo. The sites are important heritage, Indigenous heritage, environmental and recreational sites and much loved and cared for by the people who live in the southern suburbs.

The clearing is a cynical election ploy, designed to shore up support in a host of southern suburb Liberal- National party held seats that are at serious risk of falling in the March election.

For the last 8 weeks thousands of ordinary citizens have mounted protests to stop the bulldozers. They have sought legal injunctions, protested on site, occupied the site, locked themselves onto machinery, held sit ins and silent vigils, scaled and lived in trees for days to protect trees from bulldozers. 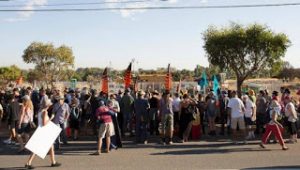 Hundreds have been arrested by a police force, acting on behalf of the State Government, who stand accused of over-reaction, use of excessive and unnecessary force and random arrest of protesters.

The protesters have been demonized by the Premier and his Ministers and by the major newspaper in the City.

The Director of the Conservation Council of WA Piers Verstegen has been one of the high profile public voices of the campaign and has successfully mounted the public case against the Roe 8 extension in daily forays in the media and in speeches on site. 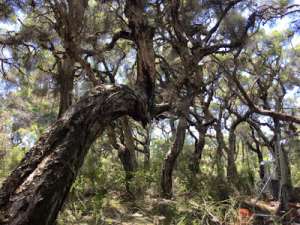 Piers posted this powerful piece on his Facebook site today. He calls for a Royal Commission into what is a profoundly corrupted and destructive project (printed with permission).

After being away from the Beeliar Wetlands for a few days and with the bulldozer briefly at bay, I took a walk into the site this morning to have look at what was due to be destroyed next. What I found was incredible.

These ancient paperbark (melaluca) trees are the largest and oldest I have ever seen. They would already have towered above the Beeliar Wetland at the time when the Swan River Colony was first settled. Now they are about to be destroyed within days by Colin Barnett’s Bulldozer for the Roe 8 highway.

The towering paperbarks shading the cool sedges, rushes and and other understory species are part of an endangered ecosystem – the result of the longest continuous evolutionary process on this planet. Centuries ago, this type of woodland would have covered much larger areas, but with the majority of our wetlands having been filled in, drained or used as rubbish tips, this is one of the very few areas we have left in good ecological condition. 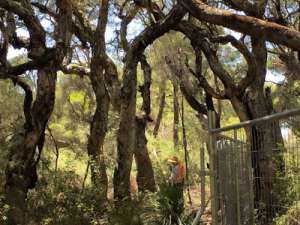 The site is a sacred women’s place for Nyoongar people and perhaps hundreds of generations of people would have been born here. This apparently is of no consequence because the State Government has unilaterally de-listed these areas from the Register of Aboriginal Heritage sites.

This is the section of the highway where a ‘bridge’ will be built, supposedly to minimise environmental damage. The trees that will not be bulldozed will be underneath huge sections of concrete which will block all light. Their roots, and the delicate groundwater hydrology beneath their massive trunks will be disturbed by the excavation of giant footings for concrete pylons. Giant cranes, earthmovers and other heavy machinery will compact the soil and further damage what remains of this place. The actual road-building work will not commence here for many months so destroying this place right now, just weeks before the election is totally unnecessary – an act of senseless environmental and cultural vandalism.

The fact that our environmental laws can allow a place like this to be trashed for a toll road which has no business case and no clear economic benefits, shows how deeply inadequate those laws are.

Last week I posted an open letter to the WA Environment Minister regarding failures to comply with conditions leading to the unnecessary death of bandicoots and other wildlife at the clearing sites. After having no response to that letter, the community has had a small win today as the contractors suspended clearing work to allow more trapping for wildlife to take place. Here, the community has managed to uphold the conditions on the project for a single day after weeks of blatant breaches with no response to hundreds of letters, emails and calls to the Minister or the EPA.

For now, these incredible ancient paperbarks stand. But together with so many others I am struggling to contain my anger and despair at the realisation that unless a miracle occurs, they will be destroyed forever within days. A permanent ugly scar will be left in the heart of this incredible place as a constant reminder of a heartless and misguided government desperate to regain popular support by taking a tough line on the environment.

One thing that gives me hope is that I believe that what has happened here with the Beeliar Wetlands will one day be the subject of a major Commission of Inquiry with far reaching consequences. All of this evidence will be examined – right from the beginning of the flawed EPA assessment (where EPA board members had conflicts of interest and the government failed to follow its own policies), to the last few heartbreaking weeks of constant blatant breaches of environmental conditions, to the history of corrupt and improper dealings by the companies involved, and to the misuse of police resources and well over 100 arrests of peaceful community members trying to uphold our environmental laws when the government and courts fails to do so. I believe all of this evidence will provide the platform for a future government to strengthen our environmental laws so that something like this can never happen again. And while the wetlands are trashed, those reforms will happen because people stood up for what they believed in.