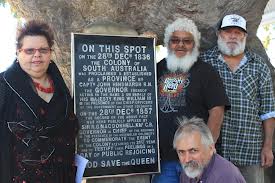 Last week the South Australian parliament moved one step closer to amending their Constitution to include Aboriginal peoples and recognise them as having occupied Australia prior to colonialism.

Decades agao, South Australian Aboriginal peoples were the first in the nation to seek this recognition however the State has languished in getting there while other States, NSW, Victoria and Queensland have included recognition in their Constitutions.

Proclamation Day is celebrated each December at Gumtree Park in Adelaide’s Glenelg – the only event of its type in Australia. South Australia does not have the past of the convict States and SA historians describe it as more of a frontier experience.

The tall ships first arrived at Kangaroo Island and then to Glenelg (part of Adelaide).

Kaurna Elder Lynette Crocker said the opportunity for the call for a Treaty will be pushed by many of the State’s influential Aboriginal peoples. She said a Treaty is what should have occurred 177 years ago.

Amendments to the Constitution were tabled to SA’s lower and upper houses to include Aboriginal peoples. SA’s Government is therefore revisiting the past and by doing so, according to Aboriginal rights lawyers and Elders any changes will redefine the legal relationship between black and white South Australians.

If both Houses pass the new section to the Constitution they will acknowledge that Aboriginal peoples were not included in any consultations to the occupation of their Country.

He believes this adequate and said the Constitutional amendment is an opportunity to “rectify the wrongs of the past.”

He said that therefore there is a greater issue than acknowledgment of Aboriginal peoples in the Constitution and that is what should have occurred in 1836 – “a Treaty.”

In the 1960s, Aboriginal Affairs minister Don Dunstan used the Letters Patent to push through the nation’s first Aboriginal Land rights legislation – in 1966.

“Constitutional changes are not enough and what is needed is a Treaty. Indigenous people never got the just Treaty. So if there are parties ready to sit down and communicate with each then should be the way,” said Mr Berg.

“There will be no bits of paper,” said Prime Minister Julia Gillard, as Acting PM, on December 28 2009 in response to a call for a Treaty by SA’s Kaurna Elder and national CEO of the Aboriginal Political Party, Lynette Crocker.

Prime Minister Gillard, South Australian bred, attended the SA Governor’s reading of the 1836 proclamation speech at Old Gum Tree reserve where she spoke as the Acting Prime Minister in the absence of Prime Minister Kevin Rudd. More than 300 attended, with then Premier Mike Rann officiating and Ms Crocker one of the speakers.

Ms Crocker said to The Stringer, “I called upon Julia Gillard to recognise the need for a Bill of Rights or Treaty with Aboriginal peoples however she rejected this, and said to me ‘there will be no bits of paper’.

“That Australia does not need a Treaty and that it is more paper is an insult and I was surprised by the manner of her response,” said Ms Crocker.

Aboriginal peoples present were shocked that the Prime Minister considered a Treaty or a Bill of Rights as “just paper”, and that Aboriginal rights should not amount to much more – “that they are not worth the ink” said Elders.

“We need a Bill of Rights for our peoples and till this happens Australia cannot move forward in the ways it should. In 1836 King William IV recognised in the Letters Patent our peoples with rights however governments since turned a blind eye to this. We have to educate all our people about their legal rights, about the Letters Patent – because its legal status today is as it was in 1836, and if more of our people understand it then we have something even bigger than the Mabo decision. It is bigger than Native Title and would enhance Native Title rights.” 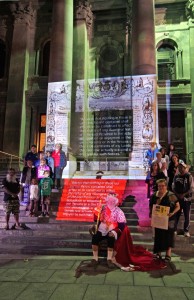 “In 1966 the late Don Dunstan (later to become a long serving SA Premier) raised the issue of the Letters Patent and that legally the State’s Aboriginal peoples had been denied their legal land rights and the implications were that land rights with reference to the Letters Patent needed to be made happen. However since Don Dunstan State Governments have pushed us off the agenda and changed the language,” said Ms Crocker. 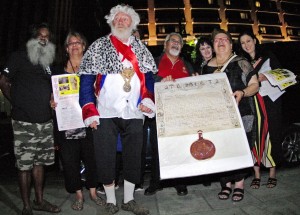 ‘On the North the twenty sixth degree of south latitude on the south the Southern Ocean – on the west the one hundred and thirty second degree of east longitude – and on the east the one hundred and forty first degree of east longitude including theirin all and every of the bays and gulfs thereof together with the island called Kangaroo Island and all and every islands adjacent to the said last mentioned island or to that part of the main land of the said province.’

Within the Letters Patent was a recognition of the rights of the ‘Aboriginal Natives’ to live within the lands of the province of South Australia.

It states, “Provided always that nothing in those our Letters Patent contained shall affect or be construed to affect the rights of any Aboriginal Natives of the said province to the actual occupation or enjoyment in their own persons or in the persons of their descendants of any Lands therein now actually occupied or enjoyed by such Natives.”

Mr Marshall, Mr Wilson, Ms Crocker and lawyer Patrick Byrt pointed out subtle changes made by Governments unlawfully in the public statements and which have crept into the public plaques “however which deny Aboriginal legal rights.” 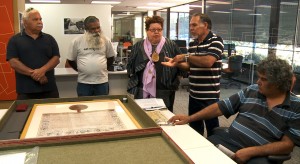 Ms Crocker said that “in the pursuit of truth and reconciliation then there has to be conciliation by truth – when the colony, province were established, and the Letters Patent acknowledged, then we will get somewhere.” This may be an uphill climb for the unrelenting AACM at this time with both Houses of the SA Government last September ramming through legislation, without Aboriginal engagement and consultation, eroding Native Title rights to negotiate oil and gas activity on their lands, and then announcing that the Government would draft legislation prior to Christmas “to tighten up” the Aboriginal Heritage Act.

“What Governments have done to Aboriginal legal rights is monstrous, but there are more people listening and understanding and we have to get this right,” said Roma Mitchell Community Centre lawyer, Patrick Byrt.At the 2010 Proclamation reading at Gum Tree Ms Crocker handed Prime Minister Gillard a book by lawyer Shaun Berg on the Letters Patent and the legal rights of South Australia’s Aboriginal peoples and while refreshing the Prime Minister with her call for a proper and respectful Treaty.

The amendments are likely to pass both Houses but with the effect that there will be no legal consequences upon the State.