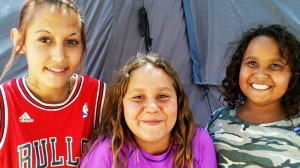 It is not often I am brought to tears but this morning I was bereft as I left behind a beautiful family of five who have been homeless for 9 months. They have been living in a single tent in bush on the northern outskirts of Perth. Four beautiful girls are homeless but in their loving mother’s vigilant care. Their bastion of hope, all their hope, rests in the dignity of remaining united.

Fifteen year old Virginia wants to be a doctor – a paediatrician. Virginia was a good student at school and likes the idea of picking up a profession where she can work with kids and to improve lives, to help her people. But she is terrified by the prospect of her family being torn up.

“My mum is a good mum, a great mum. I want us to stay together, we are a family and we should not be separated. I want us to find accommodation and to be able to do the things that we should do.”

The family had always done it tough, moving from rental to rental, from extended family support to other extended family but despite their tough living they have always stuck together. Mum, Vanessa has never let down her daughters. She is the mother to six daughters; the eldest two are married, and are now 26 and 28 years old. She does not want to burden her eldest daughters, wanting them to have a shot at life in the ways denied to her. A son-in-law phoned me to see if I could help out his mother-in-law. In recent times, my partner and I assisted in finding accommodation for several large homeless families after whipping up several social media campaigns, with a couple of these campaigns picking up national media attention. This morning I drove out to meet this homeless family.

Four daughters, a seventeen year old, Tabitha, who is 20 weeks pregnant, 15 year old Virginia, 12 year old Vanessa (named after her mum) and seven year old Akira, are living with their 43 year old mum, Vanessa Nelson in one tent. The tent was donated to them by a group called Helping Hand to the Homeless.

Nine months ago they were evicted from their home by the Department of Housing under Western Australia’s draconian ‘three strikes’ behavioural policy rule. In my view this policy is discriminatory and targeted. Targeted at not only the poorest among us, the most marginalised but effectively targeted at First Peoples.

“A baby cries and a neighbour complains and it’s a strike against us.”

“There’s some noise and all of a sudden it’s called disruptive behaviour and another strike against us.” 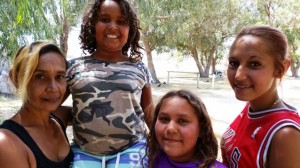 The three strike rule annually sees hundreds of families evicted, impacting thousands of children. Families of 13 children, 12 children, 11 children, 10 children, 9 children, 8 children have been evicted. It makes no sense when indeed a logical person would suggest that if there is disorderly or any suggested disrupted behaviour the police for instance should compartmentalise their response or charges against an individual. The Department of Housing and HomesWest should do likewise. It is unbelievable that a whole family is kicked out on to the streets because of the presumed behaviour of one or two. Get your act together Western Australia, you shame the nation. The more west we journey across this continent the worse it gets for First Peoples, the more racialised the responses and agenda, the more racist. The more west we go the higher the homelessness rates for First Peoples, the more acute the poverty, the higher the arrest and imprisonments, and the joke on First Peoples is worst in Western Australia, where thousands of children are evicted each year in Western Australia, where one quarter of the First Peoples adult prison population has been locked up for poverty related fine defaults (and members of the State’s Police Union tell me that they do not want to be doing this). One in 13 of all Western Australia’s Aboriginal adult males are in prison – when looking from a racialised lens and outside what is occurring in the United States with African American adult males this imprisonment rate of a people is unprecedented. When will Western Australia wake up to itself and look itself in the mirror and stare deep into its racism? Unless this happens little will change.

“I have been a good mother for 28 years. I have raised my daughters well even if I have always had it hard. The father has not been in the picture for seven years but I have been doing my best,” said Ms Nelson.

“I look around for help but the help is not the help we expect. It becomes interference. The Department of Child Protection (DCP) don’t help, they just interfere, always making things worse, always wanting to break us up.”

“They make judgments that are cheap, incorrect, and which hurt families.”

“After one of the complaints by a neighbour the DCP were also called in. They turned up and asked next to zero questions and then separated us for a while. I fought all the way to get my children back, which I did. We had been burgled but some neighbour reported it as disruptive behaviour and it was counted against us as such. And when the DCP came I couldn’t get a word in and they took the kids.”

“My mother was in her early 30s when she suicided. My dad is a good man but he too was a Stolen Generations victim. He never got over it. And when his mum and dad died only four hours apart on the same day, and he buried them together he was never the same again,” said Ms Nelson.

There are 14,000 children right across this continent of First Peoples who have been removed from their families in 2014 by the DCPs. That is a higher number of removals than in any year of the ‘official’ Stolen Generation years from 1905 to 1970.

“It took us an eight year wait to get our home from HomesWest and we were there for 3 years till we were chucked out for next to nothing. Who does that?”

“All this has had huge impacts on our family and extended family, with breakdowns and the like.”

“Before we had a home of our own, we were going from hand to mouth, from place to place, in Salvation Army homes and the like.”

As I am writing this article one of this continent’s wisest and most revered individuals phones me; Arrernte Elder, Rosalie Kunoth-Monks. Rosalie is the Northern Territorian Australian of the Year and I am praying for what maybe unlikely that she does indeed become Australian of the Year – so Australia can hear more of what Rosalie has to say. And if this were to become the case, the words of a friend, former international journalist and humanitarian Jeff McMullen may well come to ring true; that Rosalie’s wisdom may inspire and “crack the hard wall of this nation”. 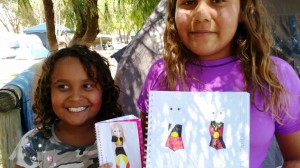 “In all my years and I am 77 years old, in many ways I have never seen it worse for our people. The push for assimilation is worse than it has ever been and our people are being punished if they resist. Not all of us want to be assimilated.”

“My family unit of my daughter and two granddaughters may not see it as much in Utopia but when we go down to Alice Springs we see it, we feel it. My granddaughters tell me that they feel it every waking minute.”

“It is an insidious situation and I hope that 2015 can shed some light on the way forward. For it has been worse on our people in terms of the push to assimilate in this last year than it has been for a very long time – and I have lived most of the 1900s.”

“I have hope in unity. I have hope that maybe everything will come together on January 26 with the Sit-In, in Canberra, with the Freedom Movement,” said Ms Kunoth-Monks.

In the meantime, The Stringer, as it has already done so with several large families that were homeless, are assisting in the search for accommodation for as many homeless families as possible.  It is accommodation which is needed, and which should be matter of fact for everyone in this wealthiest of nations, indeed the 12th largest economy, 2nd wealthiest nation per capita and with the world’s highest median wages. But this wealthiest of nations has the greatest socio-economic divide between its First Peoples and the rest of the population. We are often inundated with offers of clothing, toys, bedding for the homeless but in understanding homelessness people should realise the homeless cannot store these. We at The Stringer wish to accommodate as many families as possible, match them up with people who have vacant properties, granny flats, etc. Someone said, “What’s the point? You can only help only the few and you are not in a position to change the world.” I responded, “At least for those whom we can accommodate hence their world is changed”. The more of us that do more, the more that gets done, the more people helped.

Ms Nelson said, “I don’t understand why Governments do not build more public housing, why they don’t build hostels and more emergency accommodation. Surely the money is there.”

“I thank you for trying to help us. Every Government agency knows about us. We have been everywhere. My daughter Tabitha is pregnant. I do not want my grandchild born into a state of homelessness.”

This is a good mother, with loving daughters, a beautiful family and all honour to them for staying solid through the most difficult of times which the majority of people cannot imagine. They need our support, they need our help. We cannot wait for Governments to get their act together.

This should not be a nation in which more than 18,000 children under 12 years of age are homeless. Can you believe this statistic about the Australian nation? That Australia has more than 18,000 homeless children under the age of 12! At this time The Stringer is trying to assist this family of five with a sixth on the way, and we are trying to assist another mum, 22 years old with a one year old and 3 year old, and another mother with her teenage son who have been living in a car for the last two years.

I drove away bereft, befallen by tears, because this affluent society that is a beacon to so many from all over the world should be better than this, than in letting so many live so desperately and so vulnerable.