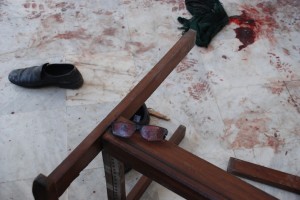 It was a sunny morning on 12th January, 2015 when school reopened and the children who lost the majority of their class fellows entered the school looking at the gates, walls, rooms, rooftops, galleries and the play ground. Memories of the day just stormed and eyes turned into oceans of tears.

It was not that same day. 16th December 2014, when more than a hundred students were slaughtered at Army Public School Peshawar. But it had the same shock and fear.

“We all went to the main auditorium of the school. All were silent and the rattling gun shots echoed in our minds and we feel our fellows coming down completely soaked in blood. I saw Rehmat my class fellow with his face completely covered with blood with eyes open as if he is still waiting for me. On that day I tried to drag him with myself though I myself got three bullets but he was just frozen with fear. He was alive but was not moving. So I left him. Today we all wept bitterly.” Ahsan student of eighth grade told The Stringer on his first day visiting the school after the incident.

The country is still in the grip of fear and uncertainty. Pakistanis are still in that trauma. After the incident at Army Public School all the educational institutions were closed till the 12th of this month, and when reopened the majority of the mothers were reluctant to send their kids and were in continuous fear until their kids came back home safely. The majority of mothers still have reservations over the matter and grave security concerns about the safety of schools. Government has already directed all government and private educational institutions to take notified measures for their security under threat of being shut down otherwise. Samina, a mother of a student Ali injured in the incident, is one among many mothers who spoke on the inability of the state to provide protection to their children.

“I am still doubtful about the security and protection that government promised. Even this school was completely guarded by military and despite all security arrangements and already having received threats government didn’t protect it. Look even elders tremble with fear just hearing what happened on that day what would be our kids state of mind when they were watching hundreds of their friends sprayed with bullets, murdered in cold-blood.  I am not going to send my son to that school again. I will not send my son back to school until I provide him my own security arrangements or train my kids to kill and defend themselves.” 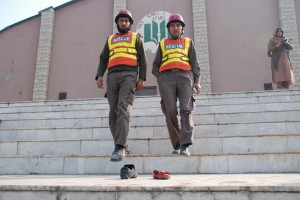 Though this region has more than a decade long history of war and if it’s the full region known as Af-Pak or Afghanistan and Pakistan then it is more than four decades of active war which is of course rare in a world where all the super powers are at war. This has pushed the hearts and minds of this entire region into a state of fear and trauma. Nobody is certain about the next few hours. Peshawar where according to locals every day is 9/11 is the worst of all. This city has the only press club in the world which was targeted by a suicide bomber. As it is widely accepted as the world’s most dangerous place on earth for journalists the journalists having that stress of situation sometimes 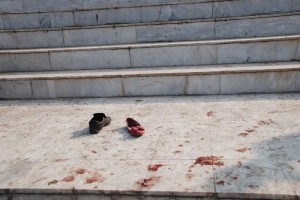 behave like hysteric subjects turning the whole media into that pace creating ripple effects and thus push the whole nation into the post-traumatic stress disorder.  People of the country still have in their minds the images shown during reporting.

“This incident has jolted the entire country. This has everlasting affects. The quality of life is impaired, people are numb, people feel insecure, the whole city feels insecure. The children who are affected particularly are those who survived having seen their own brothers and sisters killed in front of them. These children are very angry. They are absolutely perplexed.

“When we went to their homes they asked one question will they ever go back to school?” said the country’s leading Psychiatrist Professor Dr Khalid Mufti.