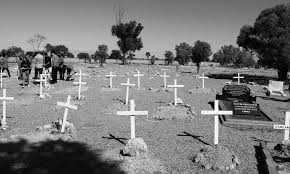 Only dead people come into the dreams of South Australian Elder Tauto Sansbury. He dreams of the deceased, of young lives lost. Mr Sansbury has dedicated his life to helping troubled Aboriginal youth, to reduce the rate of suicides.

“Death is our life,” said Mr Sansbury, describing the state of the Aboriginal landscape Australia-wide, of mourning and sadness for young lives lost far too often.

Mr Sansbury said Aboriginal suicide is a national problem, reaching horrific proportions, and that it continues to be neglected by all governments. He said that between 2001 to 2011 there had been 77 Aboriginal suicides in South Australia alone. “I am working with an Aboriginal doctor and a non-Aboriginal doctor in investigating these deaths, as we are working towards collated reports. These deaths have received little attention and this makes no sense, this is an epidemic. Between 1980 to 1989 there were 99 Aboriginal deaths in custody nationally and these deaths led to the Royal Commission into Aboriginal Deaths in Custody. Here we have 77 deaths in South Australia alone in a similar time frame and no-one is responding.”

At the beginning of last year, Mr Sansbury called for a 24/7 Aboriginal crisis centre in Adelaide following a eight deaths of young Aboriginal people in and around Adelaide in the first 13 days of the year.

“It’s approaching two years later, and the State and Federal Governments have not responded. Indeed funding promises have been broken and our youth continue to languish with nowhere to go.”

Mr Sansbury is a former CEO and general manager in Aboriginal health and employment. He is widely recognised for his considerable knowledge and expertise in working for change for Aboriginal peoples and was awarded an Australian Centenary Medal in 2003 by the Commonwealth in recognition of work as director of the Aboriginal Justice Advocacy Committee and the National Aboriginal Justice Advisory Committee. He was also the Aboriginal and Torres Strait Islander Person of the Year, state and national, for NAIDOC in 1996. He is currently a delegate to the National Congress of Australia’s First Peoples and chairperson of the Narungga Nations.

“At this time many of us have immersed ourselves in working with others, specialists and experts, in finding the ways forward to address all that is wrong, and to give hope to our people, to our youth, and to ensure governments pay attention and fund what should be funded. If we have to call a national march on Canberra then we will do this, it will happen. 77 suicides in South Australia alone, and 8 deaths in thirteen days January last year speak it all. It is time for those who can help us to listen.”

“We have been coordinating our people and raising awareness that we must move forward on all this. With deaths among our people it is a sensitive issue and many often do not want to speak about them, they just accept them but this suicides and young deaths should never become acceptable, so we must educate the best ways forward. Recently I spoke to a forum of more than 300 on all this. If we get it right for our people in South Australia, then the rest of the country may follow, but we need our State and national leaders to pay attention and be guided by us,” said Mr Sansbury.

“We are working civilly towards outcomes.”

“And on this day, I attended the funeral of the eighth South Australian Aboriginal person to die – the eight deaths in our small community this year. And it was only Day 13.

“These eight deaths are not of Aboriginal people who have lived to a ripe old age. The funeral were not celebrations of long and productive lives. No, they were all premature deaths, some of them violent, all premature and preventable.

“Aboriginal people are always at funerals. We attend out of respect for our people and community. We give our condolences and cry for our loved ones.

“On Friday the thirteenth it was the funeral of a young Aboriginal man, in his prime, who should  have had so much to live for. Born 1990, died 2012 – death by suicide. I have been to too many funeral of similar circumstances.

“I watched a grandfather speak, an uncle sing a song to his dead nephew, and procession of young cousins and friends, there to say their last goodbyes, too soon, too early for all of this. The day before this I attended the funeral of an Aboriginal lady aged 52, ravaged by diabetes for many years. How sad that you are considered an Elder in the Aboriginal community if you live to age 50.

“And there were six other Aboriginal funerals. Of the eight premature deaths, three were by suicide and another was violent. How can this be considered right for Aboriginal people, in the 21st century, in a first-world country like Australia?

“And yet there is no mention of this continuing problem in the media apart from the obituaries, and the Aboriginal community itself reacts to this situation passively as if it is acceptable and just the normal course of things. It is not an issue for discussion or action, at any level of government or in any human rights forum. I tell you it’s not the normal course of things.

“Three young Aboriginal people have already committed suicide in this State in the first week and a half of 2012, and it’s not raised a ripple that they felt so hopeless that it was easier to end their lives than to live in this ‘lucky country’. But lucky for who?

“While death is the natural conclusion to life, it’s not natural for Aboriginal people to be dying of preventable causes at this rate, years and years before the rest of the population. And yet this is what’s taking place, as eight funerals in 13 days show.

“The government says it’s committed to Closing the Gap. This isn’t occurring. In some areas things are getting worse.

“I’m compelled to stand up and say something about what’s happening. Nothing is changing. It’s not just an issue for me to raise; we need to stand up as a community and say that this is unacceptable and something has to be done. And we need to do something about it ourselves as Aboriginal people. We can’t just keep ignoring it, from generation to generation. The issue is not going to go away. It needs to be fixed, and this can only be done through proper advice and communication to government.

“Our destiny is not entirely in the hands of those in power. It is also in our hands and it is time to take control of it.”

A national body to end these high rates of youth suicides and premature deaths is being formed and by the year’s end there will be a national march on Canberra to ensure the Federal Government cannot turn a blind eye any longer.