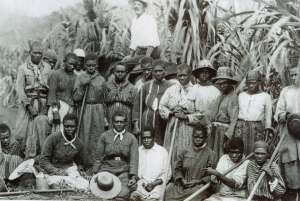 Australian South Sea Islanders, the majority who are descendants of Kanaka slaves who were shanghaied and indentured into forced labour for the half century-old colonialists particularly on what is now the Queensland coastline, are calling for full recognition as an ethnic group. Federal parliamentarians tabled a motion in the House of Representatives calling for their rightful inclusion in the Census and for various redress.

Australian South Sea Islanders president, Emelda Davis said, “It is long overdue that our people should be recognised as a people in their own right, with a history and heritage unique. We have been disadvantaged, discriminated and oppressed. We are here now with the parliamentary call for us as a people to be recognised.”

“We are the descendants of people from more than 80 islands in the western Pacific including the Solomon Islands, Vanuatu, Papua New Guinea, New Caledonia, Kiribati, Fiji, Tuvalu and other islands in Micronesia and Melanesia.”

“Our people were indentured. It was a trade akin to slavery. Some islands were reaped of their entire male population. They were culturally kidnapped and displaced.”

In 1847, Benjamin Boyd, an entrepreneur, bought 226 Melanesians. He brought them to Eden, NSW. This slave trade heightened in Queensland between 1863 and 1904. The indentured labourers were exploited to establish Australia’s sugar cane, pastoral and maritime economies. In 1901, Australia’s first Prime Minister, Edmund Barton brought on the White Australia Policy which for many of the descendants of the South Sea Islanders resulted in deportation – mass deportations.

“It was an act of ethnic cleansing. More than 7,000 South Sea Islander descendants and their families were torn apart. After forty years of displacing Islanders to Australia, their descendants endured upheaval. The majority of our people were deported, never to return. There were obviously those who were estranged from the island cultures they were deported to.”

Ms Davis said that 15,000 Islanders lost their lives directly because of the indentured labour and “they were buried in unmarked graves, no identity, unmourned.”

“My grandfather, my mother’s father, Moses Toupay Enares was taken off the beach on Tanna Island at the age of twelve. He escaped deportation and walked from Queensland to Sydney and was helped to hide by a white lady who had him wash dishes for months. When he raised enough money he returned to Queensland.”

Since the 1970s, the ASSI community has lobbied for recognition of its own people and that they should be assisted similarly to Aboriginal and Torres Strait Islanders in reference to induced disadvantage.

“We need to be assisted with meaningful programs and services for our people,” said Ms Davis.

On the first day of spring, Monday, September 1, Federal Member for Dawson, George Christensen and the Federal Member for Hinkler, Keith Pitt tabled a motion calling for the full recognition of the descendants of South Sea Islanders.

Cultural mentor, Graham Mooney who hails from the Yawibara and Solomon and Vanuatu families of Mackay who in 1992 contributed significantly to the Human Rights and Equal Opportunities report, Call for Recognition, said that his people are “still facing inequality and severe lack of inclusion in meaningful programs and services is an atrocity for our Australian Islander communities.”

Ms Davis said that “our history should be mandatory in all school curriculums alongside our Aboriginal history.”

“People need to understand the complexity and synergy of these three Indigenous cultures, given the racial demographic.”

Mr Christensen tabled that the House of Representatives should acknowledge “Australian-born South Sea Islanders as a distinct ethnic group in Australia.”

He tabled that the Australian Government should “express deep regret over the cruel treatment of the approximately 60,000 South Sea Islander, mainly young men, who were blackbirded.”

He continued on “that a number of discriminatory acts followed, chief among these being the forced repatriation of Pacific Island labourers back to their place of origin in 1906.”

Mr Christensen backed the calls by Mr Mooney and Ms Davis and tabled that there should be “consideration of measures to ensure that Australians of South Sea Islander descent can achieve equity and assistance in this present day through inclusion on the national census as a separate people group” and he called for “access to diabetes treatment in the same way this is available to Aboriginal and Torres Strait Islanders” and “access to assistance in all areas of disadvantage such as health, housing, education and training.”

Mr Christensen and Mr Pitt are to be applauded for pushing through this motion and its recommendations. The Australian Government should now move things along and ensure those among the 40,000 descendants of the poor souls blackbirded are at long last assisted.