340th death since end of the Royal Commission 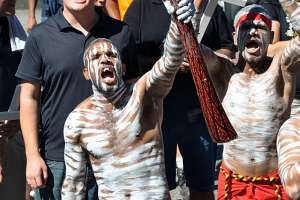 “I was eleven years old, when I marched alongside my father in 1988, one year after the commencement of the Royal Commission into Aboriginal Deaths in Custody. We marched for Eddie Cameron, who was found dead in a Geraldton police lockup.”

“I am now a father, I am now 37 years old, and here I am again, marching again this Friday, this time for my niece, who had not yet been born when we marched for Eddie, who like Eddie died in a police lock up.”

Shaun Harris’ niece is the 22-year-old Yamatji woman, Ms Dhu, who unnecessarily died on August 4 in the South Hedland Police watch-house. She is thereabouts the 340th First People’s death in custody since the end of the Royal Commission into Aboriginal Deaths in Custody, 1992.

Years later, Ms Pat said to me, “Things have not got better, if anything they’ve got worse for our people.”

Nearly a couple of hundred deaths in custody ago, only ten years ago, Mulrunji was bashed to death in a Palm Island cell. After years of public outcries and protests, after the Queensland Government’s refusal to prosecute the police officers, one police officer was finally charged but was then acquitted by an all-White jury. On May 14, 2010, a follow up coronial inquiry found that police had colluded to protect the police officer who bashed Mulrunji. Shortly after, a Queensland Crimes and Misconduct Commission report leaked to the media stated that up to seven police officers should be charged. The Commission’s chairperson Martin Moynihan clashed with Premier Anna Bligh’s Government arguing that there is a “culture of self-protection” for police. Ms Bligh dismissed the calls for a Royal Commission and instead accepted the April 2011 410 page report by Queensland Deputy Police Commissioner Kathy Rynders. The report stated no police officer needed to be disciplined in relation to the death of Mulrunji. So it appears that it is not a crime for police officers to go rogue and bash someone who is Black. Palm Island became to Queensland, and indeed Queensland to Australia, what Roebourne had become to Western Australia, what Birmingham became to Alabama, what Wee Waa had become to NSW with the death of 21-year-old Eddie Murray. The divide and inequalities between Black and White wider than ever before and more pronounced than ever before.

Because of the unnecessary death of Ms Dhu, one of the recommendations of the Royal Commission, the Custody Notification Service may at long-last be implemented in Western Australia. I met with the Federal Minister for Indigenous Affairs, Senator Nigel Scullion recently and I put the case to him for the Service, which in NSW, the only jurisdiction to implement it, has saved lives. In fact it led to zero deaths of First People in police watch-houses in the first 15 years since its implementation in 1998. Senator Scullion said, “That speaks for itself.” The Aboriginal Legal Services WA CEO, Dennis Eggington has now applied for funding for the Custody Notification Service. It only costs the host, the ALS NSW/ACT, thereabouts $500,000 per year. The Commonwealth provides the funding. The coronial inquiries that would have been had there been no CNS would have cost more if money is once again the be-all end-all argument.

Mr Harris said that deaths in custody touch far too many First People families. Mr Harris marched as an 11-year-old with his late father for Eddie Cameron, a 21-year-old in the prime of his life who died in a police cell. The night of Mr Cameron’s death there followed a riot at the police watch-house as Geraldton’s First People could take no more, as would be the case in Palm Island years later.

“A few years later, Eddie’s younger brother, Darryl, would also die in custody. I have watched Darryl’s children, who are my beautiful niece and nephew grow up without their father, not knowing their father, who he was, never getting to be loved in his arms as all children deserve.”

This Friday, at noon, around this nation, in Hedland, Geraldton, Perth, Alice Springs, Darwin, Adelaide, Canberra, Melbourne, Sydney and Brisbane, there will be rallies in the name of Ms Dhu, the 340th death in custody of a Black person since the end of the Royal Commission. They will be calling for more to be done than ever before. In the name of Ms Dhu, and in the name of hundreds of others, they will not stop. Friday is the beginning said Mr Harris.

“We will make sure Australia hears them.”

We were not put on this Earth to bury our children.

We were not put on this Earth to betray one another.