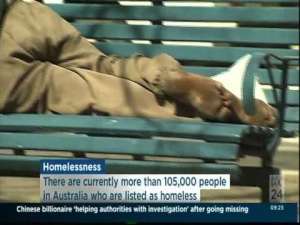 Australia is facing homelessness and poverty levels the likes it has never known and nor is prepared to admit. According to the Australian Bureau of Statistics (ABS) there are 110,000 homeless Australians. That’s how many they’ve identified. However there are 300,000 homeless Australians. More than 100,000 are children. We’ve long identified that nearly one in five of Australia’s homeless are children aged 12 years and less. Most household Australians would not realise that there thousands of children aged 12 years and less on our streets – exposed to various violence and sexual predation.

Our governments, various institutions and funded organisations and bean counting statisticians need to scrub up and start telling the truth about the extensiveness of poverty – particularly of extreme poverty – and of homelessness. With this article I will not go down the path of why poverty and homelessness are under-reported but suffice to suggest that the under-reporting is playing with people’s lives.

Australia is a relatively affluent nation, the world’s 12th biggest economy, with among the world’s highest median wages, but it is also home to extreme poverty, some of it third-world-akin. Australia is hiding its growing poverty crisis, that within a couple of decades will directly affect one in two Australians.

I have written voluminously on the ways forward but in this article I will highlight only the fact that the Australian nation in general is not being told the truth of the extensiveness of its poor and homeless. Poverty, unemployment, homelessness are pronounced in the suicide toll. The poor, unemployed, homeless fill the prisons.

I’ll call out the government data as false and that we are being lied to.

Data is produced from premises. For instance not all the unemployed are being counted. To be counted as unemployed you have to be registered with Centrelink and follow their rules in terms of looking for work.

If you work one hour per week you are reported as employed.

Relative poverty is a measure contextualising annual income to cost of living demands and therefore has to do with low income levels and the accumulation of cost of living stressors.

Absolute poverty describes individuals and families that are not able to provide basic necessities such as housing, food and clothing.

Classism will become this nation’s most hurtful sore and though it will intertwine it will subsume all the other –isms. Poverty is mounting and as a catastrophic crisis-in-waiting will tear at this nation.

Australia’s pensioners will comprise a significant proportion of Australian poverty. Today, a pension averages annually about $20,000. It’s already tough going if that is all one has. Poverty is the biggest issue. In 20 years the pension is trending to be worth the equivalent of $70 in present value. That means the pension alone will mean dirt-poor living. Unless Australians have their home paid off by their retirement and one million dollars saved in superannuation they will live their last stretch of life in poverty.

Australia’s provides more than 40,000 social houses while around 170,000 families remain on the waiting lists. If social housing were to disappear there would be millions more homeless Australians. But in the decades ahead, millions more such dwellings will be needed but there is nothing to indicate that they will appear. Future governments will resort to the worst types of tenements and to hell-hole poverty only precincts. That’s guaranteed because present governments – federal, state, local – do just about jack to respond to homelessness and to address poverty.

I’ll also argue that the national unemployment rate is not 5 or 6 per cent but that it is above 20 per cent, maybe even 35 per cent of working wage Australians. Ten per cent of Australia’s labour force is acutely under-employed with more than 1.1 million under-employed Australians working between one to ten hours per week only.

The Northern Territory’s homelessness rates are the worst in the nation and are at the higher end of the homelessness scales on the global spectrum. According to the ABS, 734 Territorians are homeless for every 10,000 population. This is more than 7 per cent of the Territory’s people living homeless. Outside of natural disasters and civil strife that’s one of the world’s highest homelessness rates. When we disaggregate we find that the seven per cent translates to 12 per cent of the Territory’s Aboriginal peoples living homeless. Sadly, the Kimberley region describes a similar tale – where 638 per 10,000 population are homeless but once again translating to the homeless majorly comprising Aboriginal people – one in 8 of the Kimberley’s Aboriginal peoples are homeless. The Northern Territory has a homelessness rate 15 times the national average. There are regions of the Territory where the homeless comprise 15 to 30 per cent of the local population. The East Arnhem has the highest homelessness rate – 30 per cent. Racism, call it institutional or structural, has disgraced this nation to the point of not lifting a finger to help our homeless and poverty affected brothers and sisters but the future speaks of a time more torrid where this type of mass poverty, third-world-akin poverty, will be experienced by millions of Australians. Classism will rear its ugly presence and become the new norm.

Imagine an Australia where 10 per cent of its people are homeless, where a quarter of Australians live in extreme poverty and where between half to three quarters of the Australian population live below the poverty line. It is coming.